"Native Fashion Now" at the National Museum of the American Indian 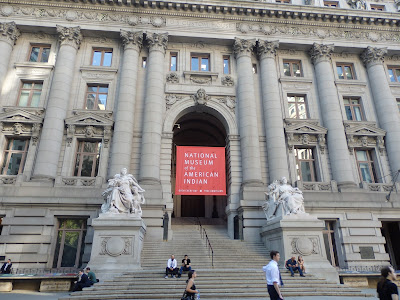 Alexander Hamilton U.S. Custom House  near Batter Park is one of the most splendid Beaux Arts buildings in  the city New York, the government invited .  In 1899 twenty architects  invited  by the government  submitted   their designs  for the new Custom House. Competition was won by the young architect  Cass Gilbert. The building was completed   in 1907 and serves as a custom house till   1973 when it     moved to   Six World Trade Center.

Senator Daniel Patrick Moynihan who saved the building from demolition in 1979. Later exterior and ceremonial interior spaces were cleaned, restored, and conserved. In 1990, Moynihan sponsored the law that renamed the building after Alexander Hamilton, the first Secretary of the Treasury.   Starting from 1994 Museum of the American Indian  occupies two floors of the building sharing it with     U.S. Bankruptcy Court and the National Archives. There is an excellent   permanent exhibition, Infinity of Nations, displays over 700 Native American from different continent.  You can read more about  Alexander Hamilton U.S. Custom House   and The National Museum of the American Indian in my blog. 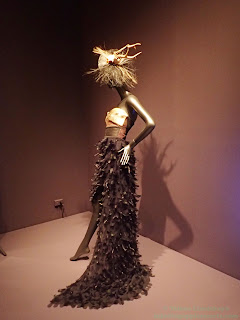 This spring and summer  the  museum is the final stop for the first large-scale traveling exhibition of contemporary Native American fashion. “Native Fashion Now”.  The show   features the work of 67 Native American designers.  One of the main themes of the exhibit is the way that Native artists mix their heritage and tradition with other cultures and technology.
“New York City is a fashion capital of the world and the works shown in this exhibition belong on this stage,” said Kevin Gover (Pawnee), director of the National Museum of the American Indian. “Native voice is powerful and Native couture is a megaphone. 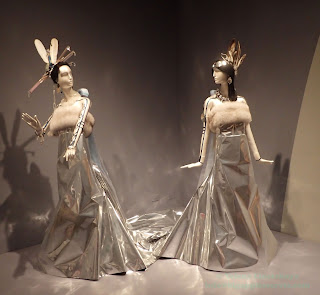 These designers’ works demonstrate to visitors the contemporary strength of Native iconographies and sensibilities.”


“We wanted to shake up the preconceived notions of Native American art and creative expression,” says curator Karen Kramer, who conceived the show. “It’s not buckskin and beads and feather headdresses.” 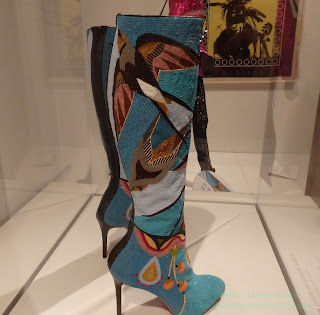 Among the dozens of notable designers included in “Native Fashion Now” are Lloyd “Kiva” New (Cherokee), the first Native designer to create a successful high-fashion brand; Virgil Ortiz (Cochiti Pueblo), who in 2003 worked with fashion icon Donna Karan to create a bold collaborative couture collection and went on to launch his own fashion line,

VO; Patricia Michaels (Taos Pueblo), who is known for her role on the popular show Project Runway and for her fashion line  (...)
The exhibition opened Friday, Feb. 17, 2017, in the museum’s East Gallery and runs through Sept. 4.  The National Museum of the American Indian is open  10 AM–5 PM daily, Thursdays to 8 PM and  admission is free. 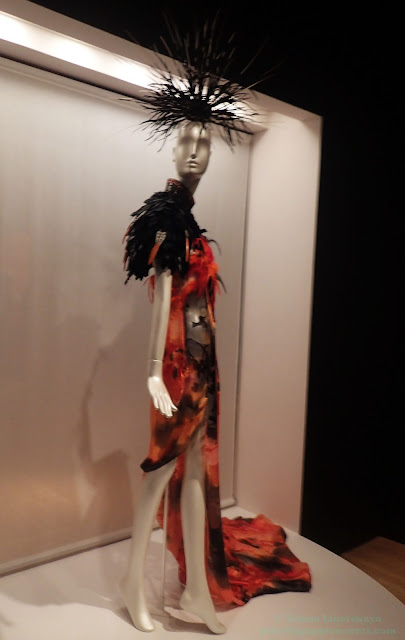 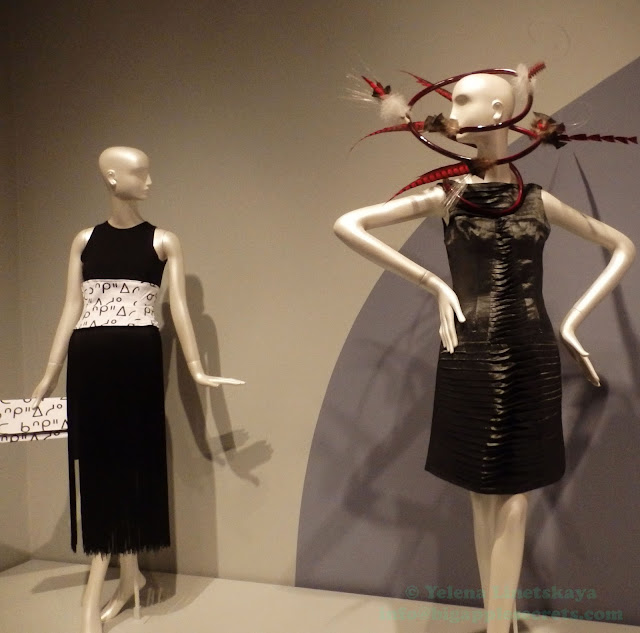 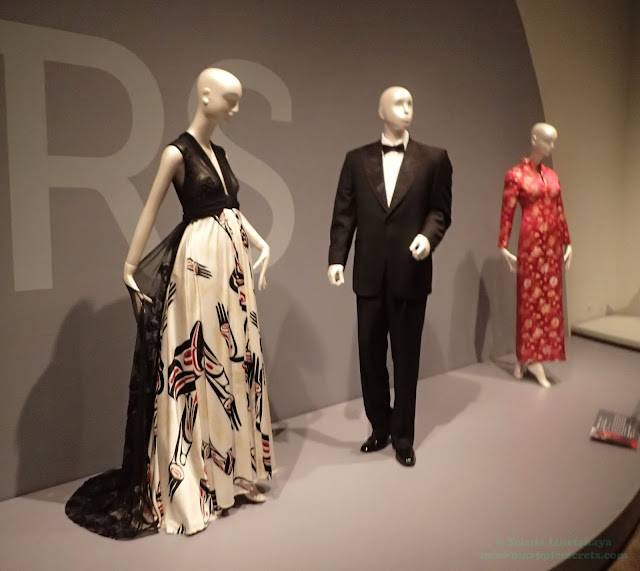 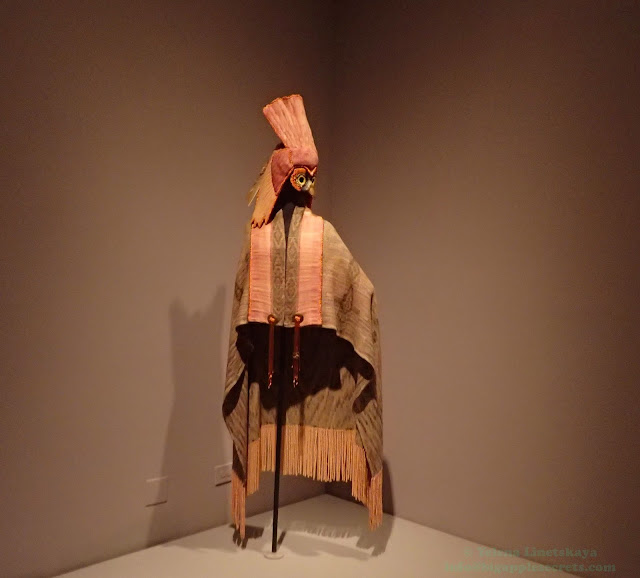 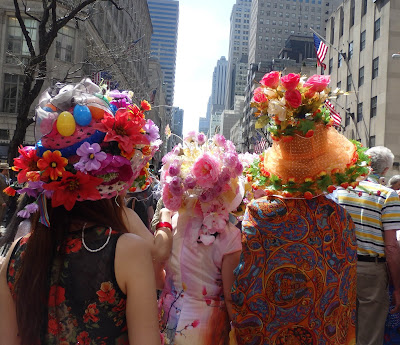 Irvine Berlin memorialized the event in the 1948 musical with Fred Astaire, Judy Garland, Peter Lawford and Ann Miller, but the New York Easter Parade tradition goes back to a much earlier time.
The Easter Parade is a New York tradition that dates back to the middle of the 1800s. The social elite would attend services at one of the 5th Avenue churches and parade their new fashions down the Avenue afterwards(...) 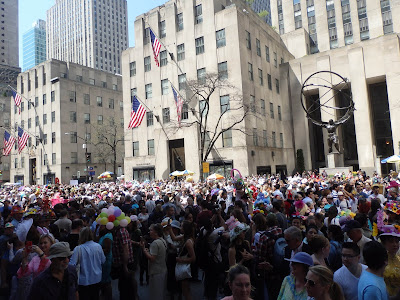 Hundreds of New Yorkers flocked to Fifth Avenue for the Easter parade and bonnet festival Sunday afternoon. Dressed to the nines, tons of people traipsed along 50th Street wearing their most creative Easter outfits and hats. (...)

Starting at about 11 am and continuing until 4pm, the parade marched north on Fifth Avenue, from 49th Street to 57th Street. 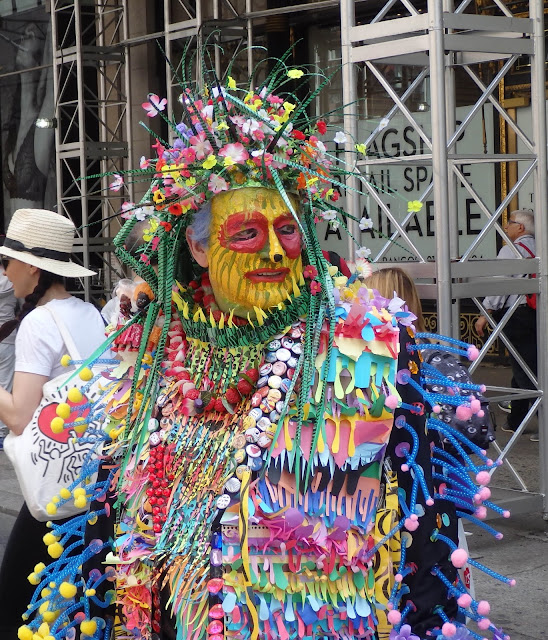 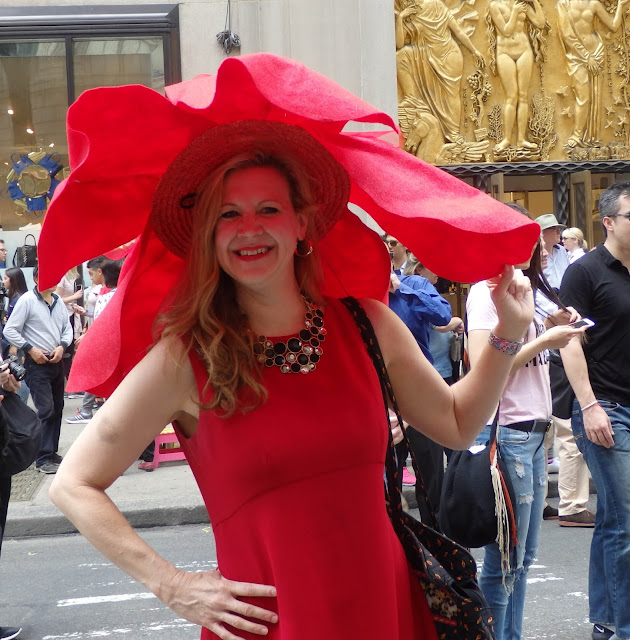 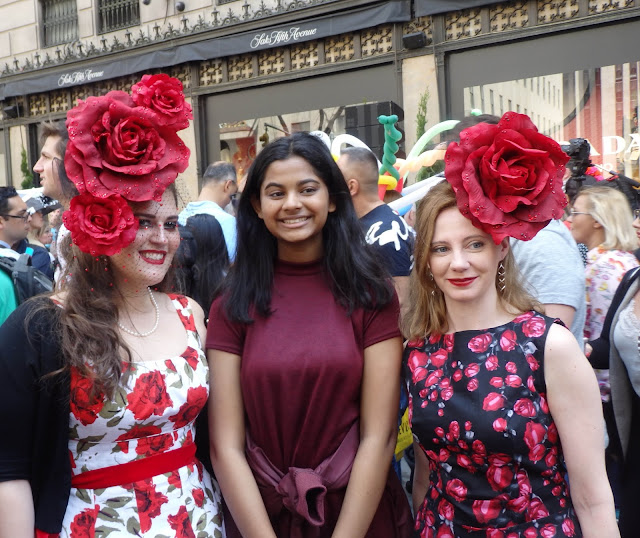 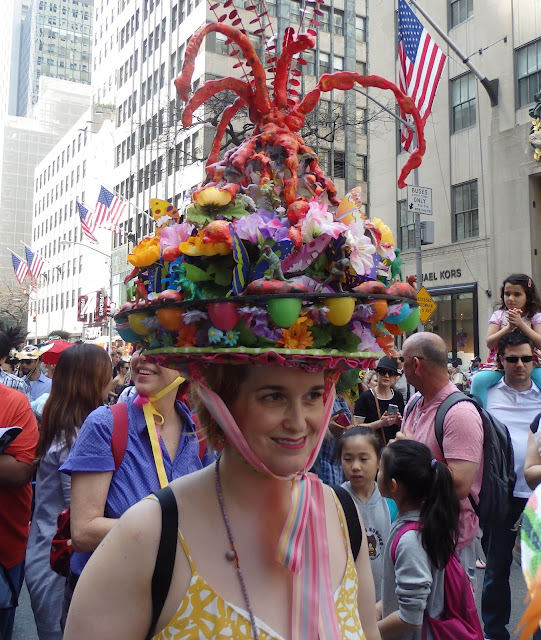 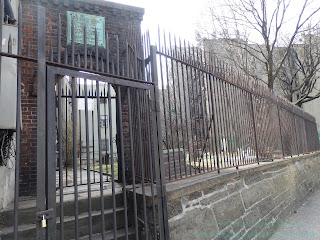 Many people working in the financial district are familiar with New York’s oldest cemetery, the Trinity Churchyard located at the end of Wall Street and Broadway.  Most people, however, are unaware that the second oldest extant burial ground in Manhattan is Shearith Israel’s Chatham Square cemetery.  Only the most northern section of Trinity’s Churchyard predates it.   Chatham Square cemetery ,  located   in Chinatown at 55 St. James Place , is very small,  like a pocket handkerchief . 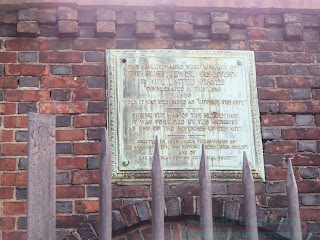 
In September 1654 shortly before the Jewish New Year,   twenty-three Jews, mostly of Spanish and Portuguese origin arrived in New York.

These people    had been living in Recife  - the former capital of the 17th century Dutch Brazil.  When the Portuguese defeated the Dutch for control of Recife, and brought with them the Inquisition, the Jews of that area left.  Some returned to Amsterdam, where they had originated.  Others went to places in the Caribbean such as St. Thomas, Jamaica, Surinam and Curacao, where they founded sister Sephardic congregations. 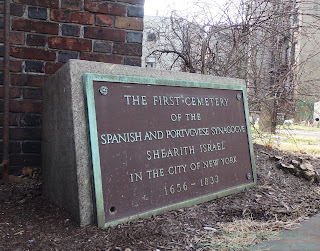 One group of twenty-three Jews, after a series of unexpected events, landed in New Amsterdam.   They were not welcomed by Governor Peter Stuyvesant, who did not wish to permit Jews to settle there.

However, these pioneers fought for their rights and won permission to remain.     (...)
in July, 1655 Jewish settlers  applied to the Dutch authorities for permission to purchase a parcel of land. They were to use this land as an exclusive burial place for their dead. They were denied the privilege, and once again, on February 22, 1656, appealed “that consent may be given” for the purchase.
In 1664 the British took New Amsterdam and renamed it New York. The Jews were accorded   more civil rights. By 1706 they had organized their own congregation, Shearith Israel. 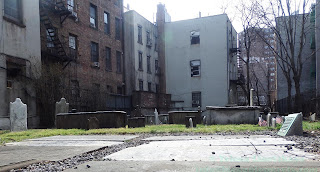 The Cemetery was originally  outside City limits . There was  a dense forest extending for two miles towards what is today Chatham Square in Chinatown.  Not until 1701, according to one authority, was the burial place amortized and did then go into the exclusive possession of New Amsterdam Jewry.
The oldest decipherable inscription in the Cemetery is over the grave of Benjamin Bueno de Mesquita, interred in 1683. 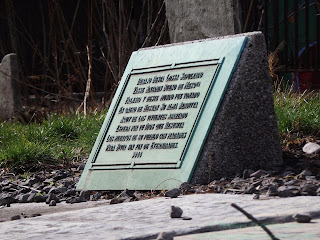 In 1856, the Congregation Shearith Israel was compelled, upon the City’s request, to remove 256 graves to its cemetery on Twenty-first Street, a little west of Sixth Avenue, which was purchased in 1829. 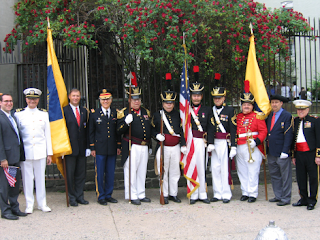 
Every year on the Sunday preceding Memorial Day Weekend, the congregation conducts a memorial service in their honor, planting American flags at their stones and reciting the  memorial prayer. The service is accompanied by a US Color Guard and it is a truly stirring event.

Four years ago on April 6 2013 I started blogging and published first two blog posts in my BigAppleSecret. com.
Four years and more than four hundreds posts later my blog is still up and running. Every month about two thousand people read my blog.
In honor of the my blog birthday I chose top 12 most interesting posts published last twelve months. Enjoy!