Nereids and Tritoins near Rockefeller Center 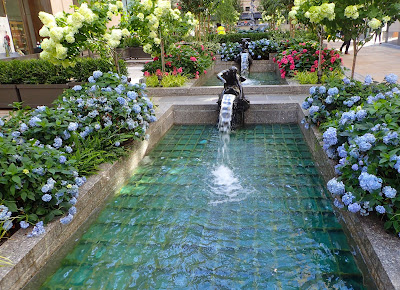 Rockefeller Center is  22-acre   complex of 19  limestone buildings in midtown Manhattan.    The complex is  one of the most popular attractions in NYC. The group of skyscrapers was built between 1929 and 1940 and designed by a team of architects headed by Henry Hofmeister, H.W. Corbett, and Raymond Hood.  Constructed during the Great Depression’s worst years, the project gainfully employed over 40,000 people.  John D. Rockefeller Jr. decided that Rockefeller Center should include buildings dedicated to the trade of specific countries.
The British Empire Building (620 Fifth Avenue)   and  its twin, La Maison Francaise, located on the corner of 49th were built in 1933.  To link the two buildings, the architects designed a  narrow area,  200-foot promenade between two buildings that leads from 5th Avenue to Rockefeller Center. 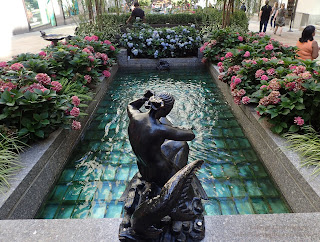 The promenade was  named Channel Gardens,  because  of the English Channel  ( or   in  French: la Manche)  than  separates England from France.  At the beginning    New Yorkers constantly congregated in the Channel Gardens,   as something new was always happening.   In 1941 Rockefeller Center transformed its promenade overnight, transplanting crab-apple trees in full fruit and over 2000 red, bronze and yellow chrysanthemum blooms in celebration of their autumn festival.

The Channel Gardens has six pools with fountains.   During the winter, the Channel Gardens' fountains are  shut off and are decorated with Valerie Clarebout's sculptures of angels.  Each pool has a large fountainhead sculpture, designed by Rene Paul Chambellan. 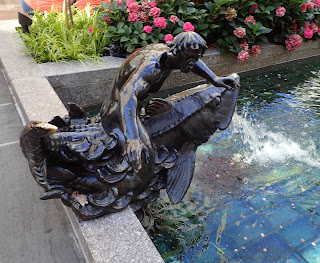 Chambellan was born in West Hoboken, New Jersey and spent the first part of his life in and around New York City.   While serving with the Army Corps of Engineers in World War I as a sergeant he endured a gas attack but survived with wounds to lungs.  After the war  Chambellan studied at Ecole des Beaux-Arts in Paris.  His most productive period   lasted from 1922 to 1939.  His sculptures    grace more than 30 buildings in New York.  Chambellan worked closely with Raymond Hood, the architect of the Rockefeller Center. 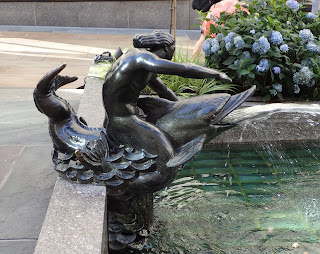 Unlike most architects  Hood  implemented his vision   not through  progressive iterations of sketches but from small-scale models. And  among Hood's generation of  Architects Chambellan was cherished for his models.


Chambellan created these six 33" by 26" by 47" sculptures from the Channel Gardens that were cast at the Roman Bronze Works and  installed in 1935.

Three female figures are Nereids and three male figures are Tritons.  The Nereids were sea nymphs in Greek mythology, fifty in total, daughters of Nereus and Doris.  Their name simply means, Children of Nereu. They helped sailors on their voyages when they faced fierce storms.   The oldest mention of the Nereids comes from  Plato,  a philosopher in Classical Greece and the founder of the Academy in Athens.  When Plato was describing the Temple of Poseidon on the central island of Atlantis, he said that there was a golden statue of Poseidon with one hundred sculptured Nereids riding dolphins around the base of the statue. 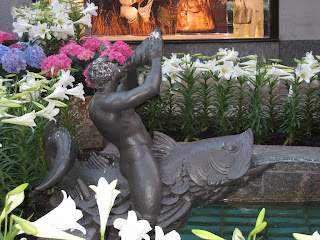 The actual idea of a race of tritons actually came from the Greek God, Triton, who was said to be the son of Poseidon.  Like his father, Triton carries a trident. However, Triton's special attribute was a twisted conch shell, on which he blew like a trumpet to calm or raise the waves. Its sound was so terrible, that when loudly blown, it put the giants to flight, who imagined it to be the roar of a mighty wild beast.
Each figure  either  one of Tritons or Nereids   is depicted riding on the back of a sea creature and represents an attribute that has enabled mankind's progress (from Fifth Avenue towards the lower rink): Leadership, Will, Thought, Imagination, Energy, and Alertness. 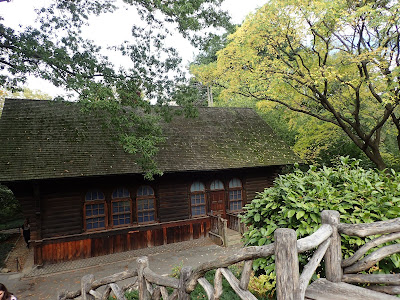 I
If you enter Central Park from West 81 street  you'll see one of the best-kept secrets of New York for kids:  Swedish Cottage Marionette Theatre.
The Swedish Cottage is home to one of the last public marionette companies in the United States. Swedish Cottage Marionette Theatre was founded in 1939 and today the company continues to fashion its own scripts, make its own puppets, and produce its own shows.
The house was originally  constructed as a model schoolhouse and was  transported to Philadelphia to be shown as Sweden’s entry in the 1876 Centennial Exposition. 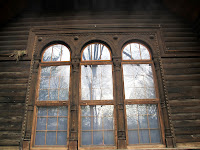 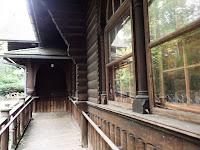 Central Park co-designer Frederick Law Olmsted liked  the  rustic building and at his urging the cottage was disassembled and transported to Central Park. The cottage was used as  the nature study center for children and an entomological lab before it became headquarters for the Parks Department’s Traveling Marionette Theater. 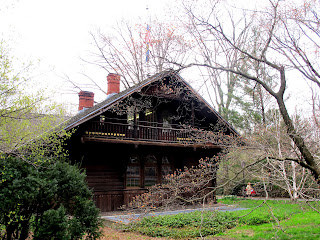 The theatre holds up to 100 people and has a party room. You have to arrive half an hour before the show to be able to pick of the  seats.

The theater is a 5-minute walk from 79th and West Drive Central Park entrance. There are signs guiding you there. It is next to the Shakespeare Garden 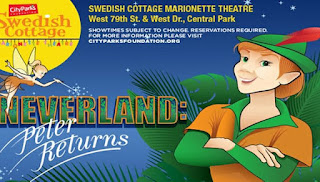 Based on J.M. Barrie’s iconic Peter Pan tales, Neverland: Peter Returns is the Swedish Cottage’s spin on the beloved children’s classic. Leaving their parents behind, the Darling children follow Peter Pan back home to Neverland for the adventure of a lifetime. When the cunning Captain Hook turns Peter’s pals Tiger Lily and Tinker Bell against him, the children team up with the Never Boys to save the day, learning the value of forgiveness and friendship (….)

This is also  a place  where children celebrate their 3/4/5 year old birthdays. $800 fee (for three hours)  includes private showing of current production, usage of party room for up to 75 people , equipped with child-size furniture, small microwave, small refrigerator, one large table and five small  tables.  An additional hour can be added onto the  party for the cost of $200.