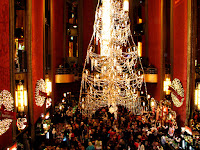 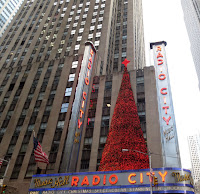 The first Christmas show was produced December 21, 1933, and ran for two weeks. Radio City Music Hall   opened  one year earlier,  in December 1932.  The show was created by the Music Hall's stage producer Leon Leonidoff and designer Vincente Minnelli  the farther of Liza Minnelli).

Leon  Leonidoff  was burn in the little village of  Bendery. It was the part of  Rumania at that time . After the World War 2 Bendery  was the part of the USSR. He studied  at the University of Geneva, but  when a Russian acting company, passing through, invited him to join, he left school. Later, he became a founder of the Isba Russe ballet company, which made its way to the Metropolitan Opera House in New York in 1920.  Leon  started working  at the Radio City Music Hall   in December    1932, and two years later became senior producer.
Russell Markert, the founder and longtime director of the Rockettes  began his professional career on Broadway. I n 1925, in St. Louis  he founded a women's precision troupe called the Missouri Rockets. While playing in Manhattan, the group was spotted by the impresario S. L. (Roxy) Rothafel, who headlined them at the Roxy Theater as "The Roxyettes".   They moved to the Music Hall for its 1932 opening  and   were an instant sensation. 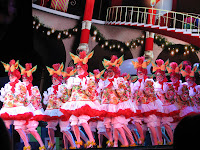 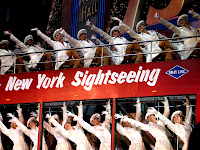 Starting with just 16 women, the numbers grew over the years to what is now a 36-member Rockette kick line.  Everything - the height, the costumes and steps - was kept completely identical. The illusion of uniform height is maintained to this day by putting the tallest dancers in the center, and gradually decreasing the height with the shortest women at either end.
Rockettes appear Macy's Thanksgiving Day and are the inspiration for their own Rockette doll. Since 1932, more than 3,000 women have danced as Rockettes. Each year, in cities across America, hundreds of young women audition to be members of the internationally known troupe. Radio City Rockettes must be between 5'5" and 5'10" and must demonstrate proficiency in tap, jazz, ballet and modern dance.
Rehearsals start in September and are everyday Monday through Friday, from 10 am to 6 pm.  Each Rockette goes through eight costume changes a show.  One of the quickest one is the soldier dance into the double decker bus – New York at Christmas and that change is 78 seconds.
Microphones in their shoes magnify the taps during the "12 Days of Christmas" routine.
.
Posted by Секреты Большого Яблока No comments:

Animals in the windows

Forget window shopping this holiday season! This year  Manhattan's 5th Avenue retailers displays are a gift to passers-by  and a paradise for the animal lovers.  You can see deer and camels, ducks and panthers, turtles and giraffe. I made a gallery for you with the pictures of some animals that  I like. Enjoy! 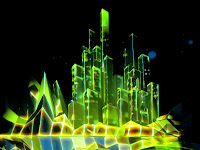 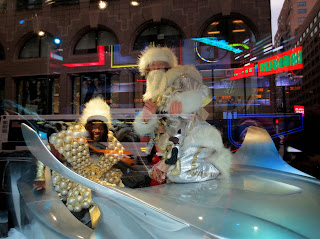 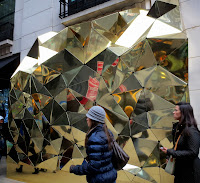 Lord & Taylor is the oldest luxury, specialty-retail department store chain in the United States. Samuel Lord, an immigrant to the United States from England, and George Washington Taylor, his wife's cousin, founded the store in 1826 on Catherine Street in Manhattan. Lord & Taylor opened its   flagship store and headquarters on Fifth Avenue between 38th and 39th streets on February 24, 1914.

Lord & Taylor’s classic holiday windows  are delightfully romantic and  offer a vintage look at New York City. A giant Santa helps himself to cocoa in one window, while in another, jazz musicians glide in and out. Planes, trains, automobiles — and even a hot-air balloon — fill another window. It is good that some things never change. 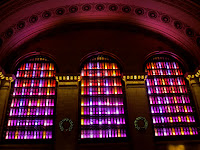 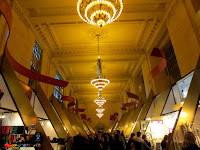 There are three more reasons  to visit Central Terminal on the  Holiday  Season 2013:
1. In addition  to the  food market   Grand Central Terminal’s 14th annual Holiday  Fair with more than 70 vendors started several days go.  The stands in the Vanderbilt Hall  offer  a wonderful array of holiday gifts- jewelry and accessories for men and women, bath and body items, home goods, collectible toys. 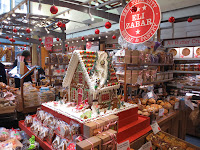 2. In partnership with MTA Metro-North Railroad and Grand Central, Toshiba has created a state-of-the-art light show that transforms the 118 separate window panes into individual "pixels" of light. A  winter holiday-themed show  will run through December 26. 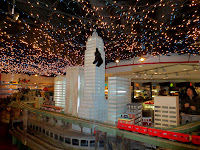 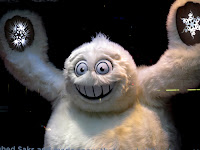 The Yeti, once better known as the Abominable Snowman, is a mysterious creature said to live in the mountains of Asia. It sometimes leaves tracks in snow. A yeti was reportedly captured in Russia in December 2011. At a 2011 conference in Russia, participating scientists and enthusiasts declared having "95% evidence" of the Yeti's existence. However, this claim was disputed later. Despite dozens of expeditions into the remote mountain regions of Russia, China, and Nepal, the existence of the Yeti remains unproven.  The scientific community generally regards the Yeti as a legend,   but it remains one of the most famous creatures of cryptozoology.

For years, Saks Fifth Avenue has projected snowflakes onto the façade of its flagship store in Manhattan as part of its holiday decoration. In 2011 Saks’s design partners created a the book "Who Makes The Snow?  " about a family of Yetis living on the roof of the building. The Yeti family is responsible for the snow that falls down the sides. . The book tells the tale   of how the first Yeti came to live up on the roof of Saks. 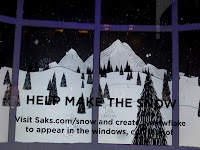 There are six animated windows in total of the flagman shop Saks on 5th Avenue.
This year each window  depicts a scene from Yeti’s life.  It’s a classic immigrant’s story about a teenager that begins in a snow factory in 1950s Siberia and ends in New York.
The first window show Yeti  working on the factory: 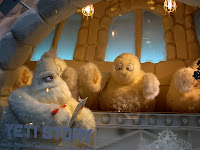 The Yeti was working
the factory line,
making fresh snowflakes
of fancy design

Spectators can add a personal touch to the window display too. Before arriving, visit saks.com/snow to discover your Yeti name and create your own snowflake, which can later be pinged from your phone onto the tableaux.
You can see two short movies made by me in December 2013:Yeti Story a Snowflakes on the  building 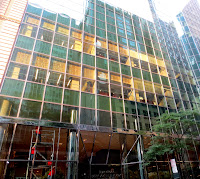 During the Christmas season, the atrium  of Park Avenue Building (Blackrock) has amazing animated exhibits with Christmas music by the noted Mechanical designer Lou Nasti. 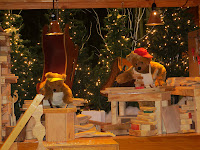 Bears and other animated animals  sing , skate, cook and enjoying the holiday with moving parts popping up and background holiday music. The atrium is roomy and bright and there are tables and chairs.

Lou Nasti is the master creator and the designing mechanical genius.
"Everyone calls me Geppetto," said Lou Nasti. "I mean, look at me: The glasses, the gray hair — and I play with dolls". 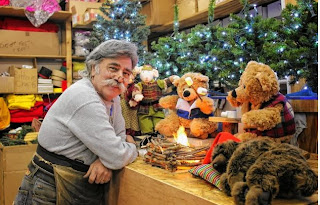 For almost 44 years, Nasti has created holiday-themed displays for department store windows and shopping malls.
Nasti's displays have been seen in most of New York City's major department store windows. He started as a window dresser as a teenager. He was on  front page of The New York Times when he built a giant robot that could walk and talk. A few years later, he started his company, Mechanical Displays Inc. located in Brooklyn.

The Macy's windows holiday display is a tradition that dates back more than 100 years. You can find the story of Macy's in my old blog posts here and here. 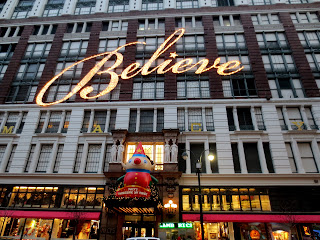 In 1862, the R. H. Macy Co. was the first department store to have an in-store Santa at Christmas time. Soon after, Mr. Macy began decorating his large windows with huge displays that would attract the attention of passers-by and prompt them to come in and browse or purchase some of his top-quality items.
You can find more about annual Macy's Thanksgiving parade  in one of my posts here.

The team of carpenters, machinists, artisans and animators spend 35 weeks working on the scenes. In the early days the animated holiday scenes were powered by employees taking turns walking on a treadmill below the windows to keep them in motion.
This year   Macy's Christmas windows display a little boy's journey through an enchanted forest on Christmas Eve.