The Magic of Macy's. The history of the store.Part 2 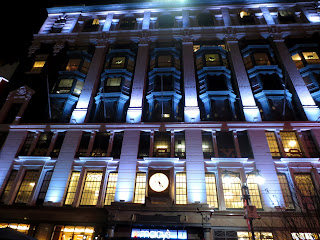 Macy’s is more than 150 years old and has probably been mentioned (or seen) in more movies and television shows. In many ways, Macy’s is a pop culture icon. I told about Macy's in 19th  century  in my previous  post.

By the early 20th century, the vicinity of Union Square, Ladies’ Mile, and 14th Street, where Macy's store was located  changed greatly as the theaters and retail trade, like Macy’s, moved into midtown. The owner of Macys Isidor Strauss  move his store to the current Broadway building designed by architects De Lemos & Cordes  in 1902. 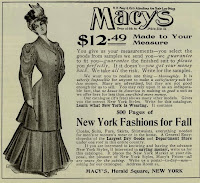 It was so far north of the other main dry goods stores that it had to offer a steam wagonette to transport customers from 14th Street to 34th Street.  In 1902, Macy’s Herald Square was among the very first American retail stores with escalators. Original wooden escalators remain in operation today and will be preserved in the 2012-2015 remodeling project.

Macy's owner  Isidor Straus and his wife  Ida perished on the  Titanic in 1912. Ida insisted her newly hired English maid, Ellen Bird, get into lifeboat.   She gave Ellen her fur coat stating she would not be needing it.  Ida is reported to have said, "I will not be separated from my husband. As we have lived, so will we die, together."   Isidor and Ida were last seen on deck arm in arm.    Isidor Straus  was born in  Bavaria in . In 1854 he emigrated to the United  States with his family. Although Isidor's body was recovered, Ida's body was not.

A cenotaph at the Straus Mausoleum at Woodlawn Cemetery in the Bronx is dedicated to Isidor and Ida together. Its inscription(the quote from the Song of Solomon) reads: "Many waters cannot quench love - neither can the floods drown it."  The couple were depicted in James Cameron’s famous “Titanic” film (1997).

Near the end of the movie  we see an old couple embracing in bed as water pours into their cabin. But in the real life there were last seen in the chairs on the deck.

Isidor Straus and his wife Ida memorial is located in Straus Park, at the intersection of Broadway and West End Avenue at W. 106th Street , one block from 105th St. and West End Avenue, where they resided .
About 5,000 employees of Macy’s department store contributed  to create a memorial plaque for their boss, Isidor Straus, and his wife, Ida
.
“Their lives were beautiful and their deaths glorious,” read the inscription on the bronze plaque that for almost 100 years graced a wall inside Macy’s Memorial Entrance, on 34th Street in New York.

In 1924, when the last expansion section was completed, Macy's became the largest department store in the world and retained that designation for 85 years

Macy’s Herald Square introduced the first colored bath towels to America in 1932. In 1939, Macy’s offered installment credit to customers for the first time. Previously, it was known as a cash-only retailer.

It helped popularize the board game “Scrabble” in the early 1950s. The chairman of Macy's placed a large order in 1952 and popularity shot through the roof.

There are about 800 stores Macy's stores now in  every major geographic market in the United States.

Macy's Thanksgiving parade started  in 1924  and was originally called the Macy’s Christmas day parade. I wrote about parade in one of my old posts.

The classic holiday film, Miracle On 34th Street opens in 1947. and is set in Macy's Herald Square, proving that Macy's has the one and only true Santa Claus.