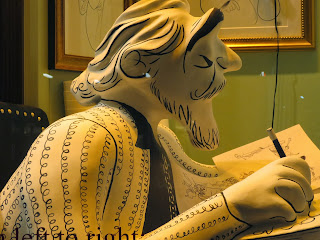 Al Hirschfeld's  drawings of celebrities like Marilyn Monroe and Woody Allen can be seen  in 3D in a holiday show in the window of "Henri Bendel" - the upscale  women's specialty store based in New York City. You can find more info about the window show in one of my posts here. But Hurry - the show end in the beginning of January!

The famous American Caricaturist Al Hirshfield was born June 21, 1903, in St. Louis, Missouri.  When he was 12 years old and had already started art lessons, the family moved to New York City. He attended public schools and the Art Students League on West 57 in New York.

He studied art in Europe and traveled in East Asia, where Japanese and Javanese art influenced his graphic style. He was especially known for his stylish caricatures in the New York Times over many decades , starting  from 1929, portraying show-business personalities.  Hirschfeld also illustrated many books.   His signature work, defined by a linear calligraphic style, made his name a verb: to be "Hirschfelded" was a sign that one has arrived.

Al used   the barber's chair while working.  He was married to a  celebrated artist Dolly Haas   and  had a daughter, Nina, born in 1945. 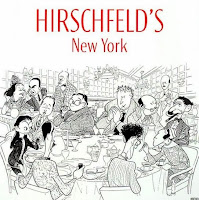 After her birth  the artist  hide her  name  at least once in most of his drawings.  Next to his signature he put the number of ''Ninas'' in his drawing in the lower right-hand corner of each drawing. 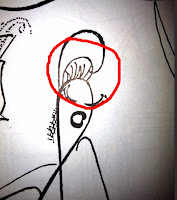 It has become a "game" for Hirschfeld fans to find the Ninas in his works.  So popular did the Ninas become that the military used them in the training of bomber pilots to spot targets.  A Pentagon consultant found them useful in the study of camouflage techniques.


His works are  is in the collections of many museums, including the Metropolitan Museum of Art, the Museum of Modern Art and the Whitney Museum of American Art in Manhattan.

There is a theater in New York named after the artist. It is theater located at 302 West 45th Street in midtown-Manhattan and  was built by the architect G. Albert Lansburgh for vaudeville promoter Martin Beck.


The theater opened  with  “Madame Pompadour”  in  1924. The theater  was designed to be the most opulent theater of its time,  has dressing rooms for 200 actors and a  seating capacity of 1,424 for musicals. The theater  was  named after  Al Hirschfeld’s  and reopened in  2003, several months after Al Hirschfeld death,  with a revival of the musical Wonderful Town.  The theater currently houses “Kinky Boots”.

The Library for the Performing Arts presents the largest exhibition of Al Hirschfeld’s artwork and archival material from its collection.  The artist works are on show  from October 17, 2013, through January 4, 2014.

Margo Feiden's gallery  in Greenwich village is the only authorized agent of   Al Hirschfeld's work. It is like a mini-museum housing eighty years' worth of original drawings, paintings, etchings, and lithograph. 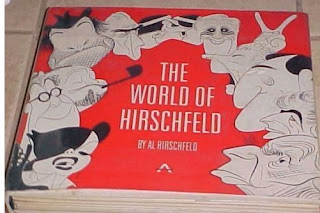 Al Hirschfeld wrote in  the introduction to his 1970 book, "The World of Hirschfeld", published in 1970: