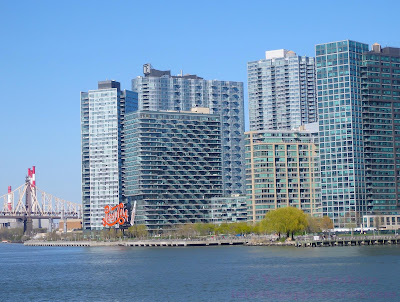 Long Island City   on Long Island   is  only one subway stop from mid-town Manhattan and right on the East River.   Long Island City offers full on views of the UN slab, radiator-topped Chrysler Building, iconic Empire State Building, and other Midtown NY skyscrapers that together form one singular sensation of a panorama.

Its waterfront is now lined with upscale, glassy new developments that are home to many young professionals looking for luxury amenities and convenience to Midtown at slightly discounted prices. Once an industrial sprawl full of storage warehouses and taxi depots, Long Island City has seen remarkable change in the past two decades.

The only  thing  remains the same - The Pepsi-Cola sign. 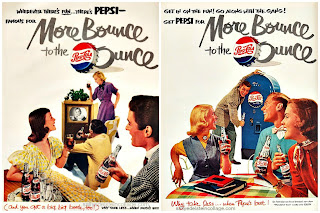 Pepsi-Cola was invented in  Bradham's Drug Store in North Carolina by the store owner Caleb Davis Bradham. In 1893, “Brad’s Drink,” made from a mix of sugar, water, caramel, lemon oil, nutmeg, and other natural additives, became an overnight sensation. On  August 28, 1898, Bradham renamed his drink “Pepsi-Cola." He believed the drink was more than a refreshment but a “healthy” cola, aiding in digestion, getting its roots from the word dyspepsia, meaning indigestion. Despite its name,  pepsin was never an ingredient of Pepsi-Cola. 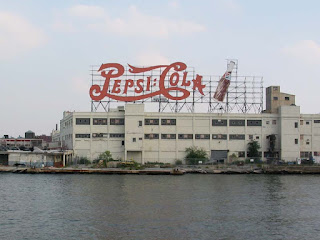 In 1943, the Arundel family started bottling and distributing Pepsi with only four trucks in Nassau County on Long Island. The name was Island Bottling Company until 1955 when the company went public and was renamed "Pepsi-Cola Bottling Company of Long Island."  The company bottled and supplied mostly PepsiCo products, including soft drinks and non-carbonated beverages like Gatorade sports drink and Aquafina water, to the five boroughs in New York City. 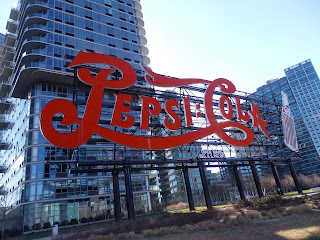 The 120-foot (37 m) long and 60-foot (18 m)   Pepsi-Cola sign was  constructed in 1936 and was  located on top of the bottling plant. In 1999, the bottling plant was closed and then sold and demolished in 2001.  Pepsi sold its facility to the Queens West Development in 2001.
But the sign was preserved and  reinstalled a short distance away in a park.  Today  it is located in front of a high-rise apartment building near Center Boulevard and 46th Avenue overlooking Gantry Plaza State Park.

The sign has appeared in several films, including Steven Spielberg's 'Munich' (2005) with Daniel Craig and Mathieu Kassovitz, and Sydney Pollack's 'The Interpreter' (2005) with Nicole Kidman and Sean Penn.
In April 2016  the sign was  designated   an official New York City landmark by the Landmark Preservation Commission. 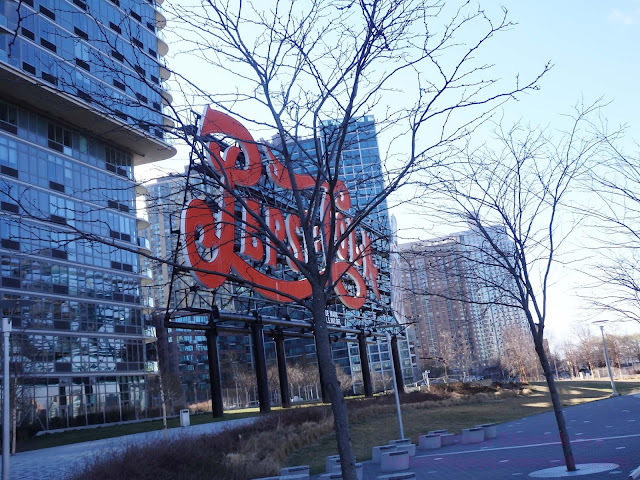 Seated Ballerina by Jeff Koons, Rockefeller Center. Is it a plagiarism? 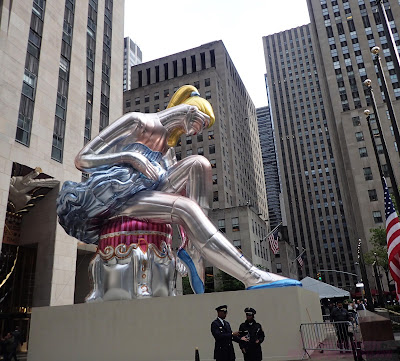 Seated Ballerina by Jeff Koons, a large-scale public art installation is  on display at Rockefeller Center from May 12 - June 2, 2017.

Jeff Koons is widely regarded as one of the most important, influential, popular, and controversial artists of the postwar era.  He  was born in 1955 in York, Pennsylvania and  received his B.F.A. at the Maryland Institute College of Art in Baltimore.   Since his emergence in the 1980s, Jeff Koons has blended the concerns and methods of Pop, Conceptual, and appropriation art with craft-making and popular culture.  In  2007 Jeff Koons contributed to the Macy’s Thanksgiving Day Parade with  the silver Mylar Rabbit, a version of a 1986 work originally rendered in metal.

The new piece is  Koons’s third project at   Rockefeller Center. The first one was a giant Puppy installed in 2000. Puppy, rising 43 feet  ,   was formed from a series of stainless steel armatures constructed to hold over 25 tons of soil watered by an internal irrigation system. Over 70,000 multi-hued flowering plants grow from this steel and soil structure, including marigolds, begonias, impatiens, petunias, and lobelias.  Puppy  was a symbol, according to Koons, of "love, warmth and happiness". 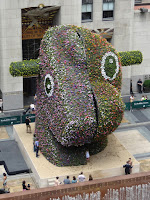 Koons's Split-Rocker,  37 feet high featuring over 50,000 flowering plants, was installed on the same place in Rockefeller center in 2014.
The Ballerina, inflatable nylon sculpture, stands 45 feet high and depicts a seated ballerina from the artist’s iconic Antiquity series. Koons has already created two versions of the Ballerina, one just a foot-and-half tall made from hand-painted wood   and  the other seven feet tall and made from the artist’s signature mirror-polished stainless steel with colored coating. 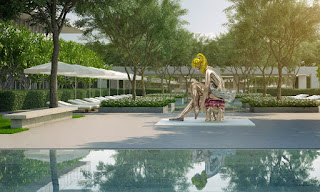 “Seated Ballerina is like a Venus. You could be looking at a Venus of Willendorf or some of the oldest Venuses,” said Koons in a statement. “It is really about beauty and even a sense of contemplation, a sense of ease.”

The    Ballerina   is inspired by a turn-of-the-century porcelain ballerina figurine found in a Russian factory.
Several days ago Several days ago  a magazine  Art Dependence published an article   with the title "Is Jeff Koons ‘Seated Ballerina’ A Copy of This Ukrainian Sculpture?"

The article mentioned that  inflatable ballerina and the small wooden version of the  statue   "feature a blond-haired ballerina in a blue tutu dress sitting on a pink stall and reaching to adjust her blue ballet shoes – details which bear a striking resemblance to the 19cm porcelain model created by Zhnikrup. Oksana Zhnikrup was a Ukrainian sculptor and painter and a member of the Union of Artists of Ukraine. 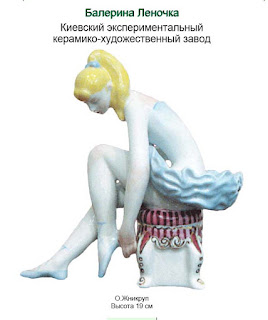 She works in   The Kiev Experimental Ceramic-Art Factory where she created a number of works, many of them featuring female characters and including ‘Balerina Lenochka'. She passed away in 1993. Her works have appeared at the Republican Exhibitions of Decorative Art and in international exhibitions in Chicago, Zagreb, Turkey and Canada.


So the question now is  can ballerina sculpture be    a plagiarism of the porcelain figurine of the Ukrainian masters? 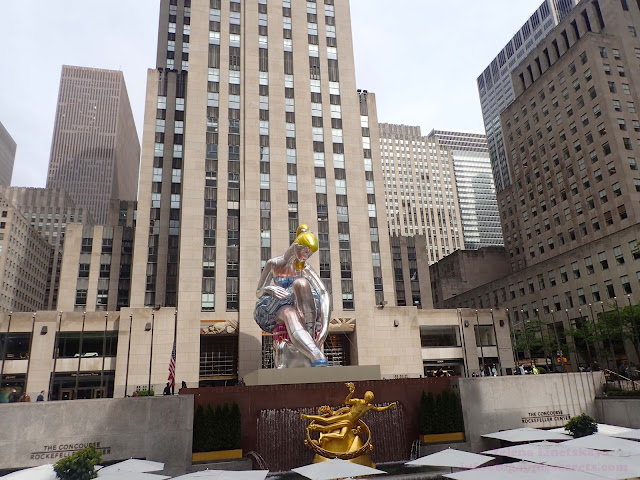 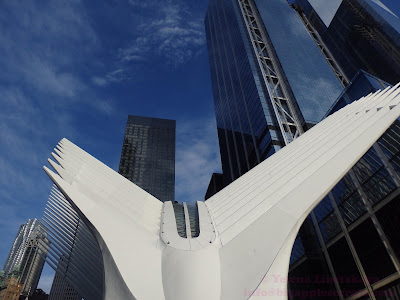 The  highly anticipated and expensive new World Trade Center transportation hub was  open to the public last July  after years of construction. The Oculus design of white wings echoes the Greek Phoenix myth of rebirth from the ashes. Every 9/11, at 10:28 am - the time that the second Twin Tower collapsed - the sun comes beaming in through the skylight.

More than 100 retail stores, ranging from the Apple Store to Banana Republic and from Eataly to Fossil,  began welcoming customers at the 350,000 square-foot World Trade Center shopping mall. The Oculus serves as a transportation hub that connects 11 subway lines, the Path trains between NY and NJ and the Battery Park Ferry Terminal.

The Oculus is not only a terminal and a shopping mall, It is also a place for art installation. 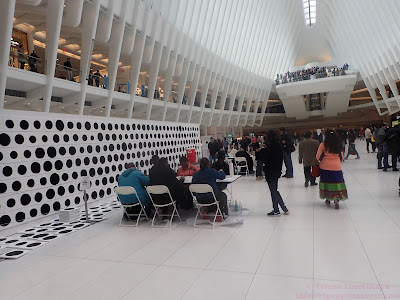 For three weekends in May artist Jonathan Horowitz is inviting the public to come paint  1612 dots. 1612 DOTS, is the newest iteration in a ongoing series, and the first major partnership the Oculus has done with an artist in its community programming series on the Oculus floor.
New York-based artist Jonathan Horowitz (b. 1966) works in video, sculpture, sound installation and photography and was described by Interview magazine as ‘the cleverest artist alive’. 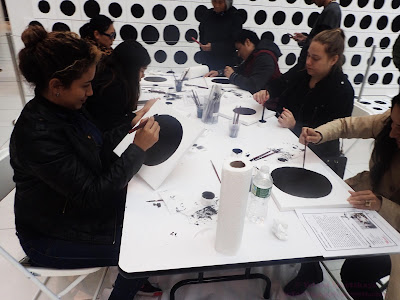 His work explores politics, war, celebrity and popular culture, although he summarizes it as being ‘about people’
Since the early 1990s, Jonathan Horowitz has made art that combines the imagery and ambivalence of Pop art with the engaged criticality of conceptualism. 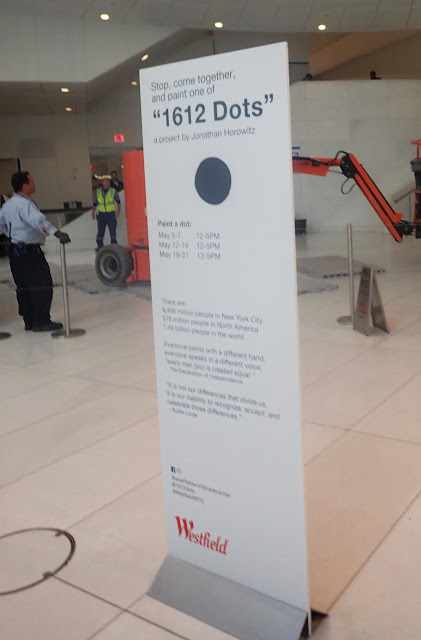 You have to think anyway, so why not think big? 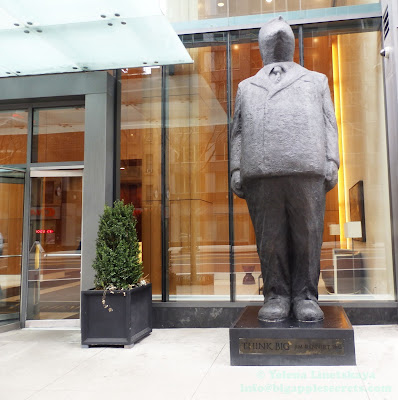 Stone-faced businessman stands on the sidewalk  , staring up at the sky.  First  it stood outside of 3 West 57th Street near Cavalier Gallery ,  later moved to  a temporary home outside of 1411 Broadway. Two years ago the statue  was installed  at the southeast corner of Union Square Park
Right now, the statue is  located   at The Anthem, a modern high-rise doorman building at  222 E 34th St New York. 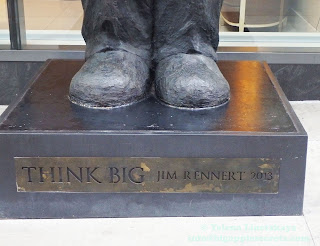 The 12-foot-tall sculpture, called “THINK BIG”  was created  by American sculptor Jim Rennert to honor everyone who works hard to achieve their dreams and goals.     Rennert was born in 1958, and grew up in Las Vegas, Nevada, and Salt Lake City, Utah. First ten years  Rennert  worked in business and only in  1993 he began exhibiting in galleries.
Rennert has traveled with THINK BIG across the nation, starting from its inception in Salt Lake City, to Los Angeles and Miami.

Two years ago Rennert said, “I’m so thrilled that I have been given the opportunity to exhibit THINK BIG in such a vibrant, creative community. It’s been a dream of mine to have my sculpture on public view in New York and I hope the piece is an inspiration to the Union Square neighborhood and the entire city The statue It weighs 1,400 pounds, that's big.  This City of New York sets the tone for the rest of the country and I think that's why it's important".
The statue even has a Twitter handle and a Facebook page. 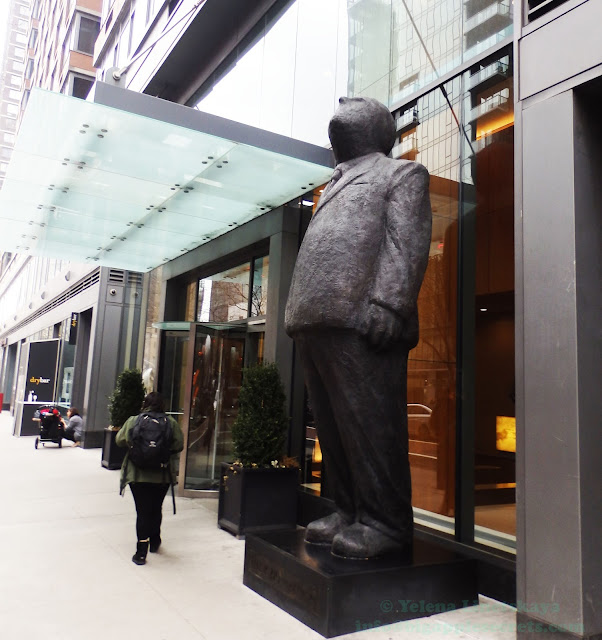