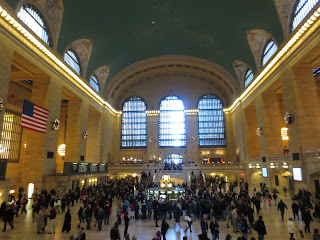 One hundred years  and three months ago, at 12:01 AM on February 2 the first passengers boarded trains departing from the new Grand Central Terminal on the east side of Manhattan, New York.   Grand Central is the world’s largest train terminal with 45 track platforms and 63 tracks. Grand Central is the second most visited tourist destination in New York City, with over 750,000 visitors every day. There are huge windows on the south side of the building. Similar windows, but twice the size, once graced the north wall. They were blocked when the 59-story Pan Am (now MetLife) Building went up in 1963. 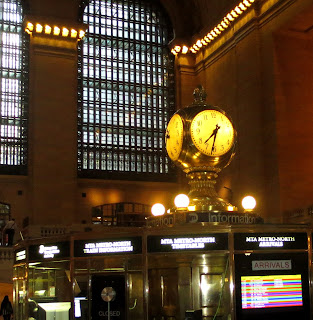 The center of the terminal is the Main Concourse, and the center of it  is occupied by the informational booth with the clock on the top. Its four convex faces are actually made from high-grade opal. The little bulbous point at the top is a compass that’s aligned to true north so the four sides of the clock line up perfectly with the four compass points of the building.


The little acorn at the top of the clock is a symbol of the Vanderbilt family. Their motto was: "From the acorn grows the mighty oak." .  In 1954 the clock  was removed for the repairs for the first time   after the Terminal was opened  in 1913. There is a spiral staircase that connects the Main Concourse booth with the informational booth one floor below.


Initially, the architects wanted skylights to fill the ceiling of the main concourse so that the actual night sky would be exposed. That option was expensive and the French artist  Paul César Helleu painted his mural instead. His portrait with his wife made by his close friend John Singer Sargent can be seen in Brooklyn  museum. Helleu was one of the most celebrated artists of the Edwardian era in both Paris and London. 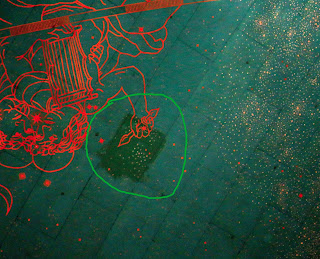 There were 2,500 stars painted on the 125 feet high ceiling.  The constellations, with the exception of Orion, are painted backwards. The backward zodiac is a mystery. According to one of the popular legends, The Vanderbilt’s were surprised when they started getting comments and letters from commuters about the mistake. They later claimed it was painted deliberately from God’s perspective rather than having to admit to the evident error.

The ceiling was completely covered in the 1930s and cleaned only in 1998.
If you look carefully at the northwest corner you can see a small dark square. The spot was kept as a reminder of how dirty the ceiling was before the massive cleaning that took place here in the ’90s. 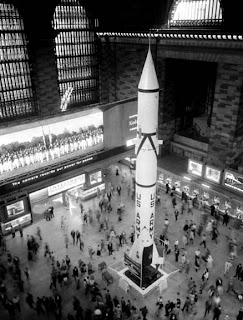 There is a small circle in the midst of the stars right above the image of Pisces. In a 1957, after the Soviet launch of Sputnik   and in the middle of a Cold war American the  Redstone rocket was placed on the floor. There was the hole in the ceiling that was made for an anchor for the cable to secure the missile that was more than 60 feet high.

During World War II millions of servicemen passed through Grand Central on their way to and from the front.  At this time there was a secret outpost M42 - the area as large as the Main Concourse.  During WW2 troops were stationed down there with the guns trained directly at the entrance. The subbasement contained a dozen of huge power convertors that were very sensitive.  If broken or destroyed the Central Terminal could be paralyzed. The old engines have long been replaced by solid ones, but M42 is still strictly an off-limits place 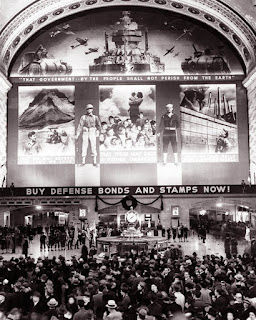 On June 13, 1942 a team of four Germans spies landed   five miles to the North of East Hampton, Long Island   from a German submarine, U-Boat 202. The plan was to destroy key logistical locations in the northeast, including Grand Central.  The spies buried their explosives, ammunition and detonators, changed into civilian clothes and headed for the train station for New York.   The Coast Guard found the hidden uniforms and the alarm went out.  On the morning of their second day in New York, the leader of the Group used a public phone to contact the local FBI.  The group was quickly arrested.


Among the maze of  tunnels, corridors, and tracks there is a Track 61 – the secret rail that was used by the President  Franklin D. Roosevelt. An elevator runs straight from the track to the Waldorf-Astoria Hotel.  FDR’s   armored rail car with bulletproof windows is still parked there.


From 1939 to 1964 CBS Television occupied a large portion of the terminal building.  In 1958, the first major videotape operations facility in the world opened in a former rehearsal room on the seventh floor.
(from eBook "Public Transportation in New York")
Today it is occupied by a tennis court that is accessible to the public.


On the same day when the Twins we ruined  by the terror attack, but 25 years  earlier, on September 11, 1976, Croatian nationalists planted a bomb in a   locker at Grand Central Terminal and  hijacked a plane. The bomb was found and taken to Rodman's Neck Firing Range in the Bronx where police attempted to dismantle it. There was an explosion that wounded over 30 and killed one. 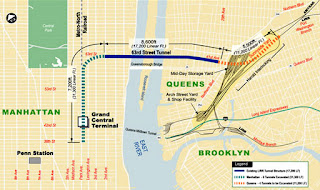 In 1994, the MTA signed a long term lease on the building and began massive renovations.  These renovations were mostly finished in 1998. The quarry in Tennessee that was used in the original Grand terminal project was   reopened  to provide matching stone to fix the old staircase and to build a new one.

There is a new project now that will bring Long Island Rail Road trains to the Terminal. The project is scheduled to complete in 2019.
To be continued....