One57 - the new condo on the Billionaire’s Row 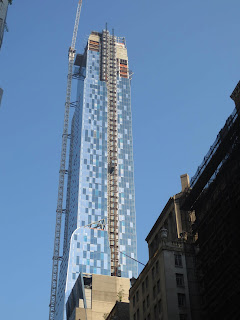 The  tallest residential building in New York City and the Western Hemisphere One57 Tower is now under construction on 157 West 57th Street, not far from Carnegie Hall. Extell Development Co. is the developer of the 90-story building.

Gary Barnett is President and founder of Extell. He had his bachelors from Queens College and Masters from Hunter. Barnett started  as a diamond trader in Antwerp, Belgium.   Later he returned to  United States  and  purchased shopping malls and office buildings in the Midwest.
The architect is Christian de Portzamparc, a French architect.

Portzamparc graduated from the École Nationale des Beaux Arts in Paris in 1970. His recent works in New York include LVMH Tower (1995) and residential tower on Park avenue South ,400 that has to be finished later in 2013.   One57 has only 92 condo units and includes everything you need (or maybe just dream about): triple-height indoor swimming pool with Jacuzzi, a crafts atelier, and even a pet washing room.


Sales at the tower reached $1 billion a year ago.  Extell had  already twice increased prices. About 70% of One57's 92 units are sold. 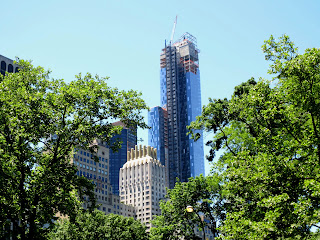 Three days ago Extell open their model apartment to attract more buyers- the building is almost complete.The walls  in this unit are covered in raw silk ,there is a leather-upholstered headboard,  fox-fur bedspread and crystal chandelier, World Street Journal reported.


Last October during hurricane Sandy hundreds of people had to leave their homes because the winds had damaged the boom of a crane on One57 that was 1,000 feet above the sidewalk. Donald Trump told CNBC that he could see the crane from his window and it was moving violently in the wind before it collapsed. “I know lots about cranes and lots about building, and I am looking at that crane right now,” Donald Trump said. “I have a window that’s just about even with that crane and I was watching it yesterday, and they didn’t tie it down.” 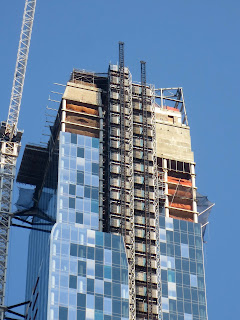 Buyers of the apartments in One57 include 66 years old fashion designer  Silas Chou from Hong Kong  (unit on 82nd floor with the price about $50 million), and   the founder of Pershing Square Capital Management LP William Ackman with the group of investors (penthouse for more than $90 million).


$90 million is a new record for Manhattan apartments. The old record was set in February 2012 for apartment purchased for the daughter of Russian billionaire Dmitry Rybolovlev.


One of the One57's latest buyers is a two-year-old Chinese girl. Her mother, who took care of the paperwork and stuff, said that her daughter will be “….. planning on going to Columbia or NYU, maybe Harvard, so she needed to be in the center of the city”


Michael Gross , the author of bestseller  “740 Park” ( the inside story of    New York’s richest  cooperative apartment building)  published in 2005, introduced the term  "Billionaire's Belt "  for  57 street and vicinity.


He said that he had seen “an uptick in the number of billionaires flocking to luxury buildings in the 57th Street and 59th Street corridors to the southern corner of Central Park, along to the Bloomberg building and 432 Park Avenue.” 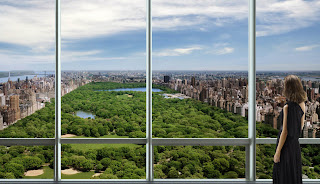 
By the way, Michael Gross and his wife live in  Alwyn Court (180 West 58th ) -   apartment house that was evacuated twice during last 6 months-the first rime when the crane on One57 collapsed, and the second time just less than two months ago when  the crane had to be reinstalled. 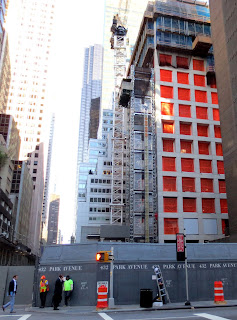 One57  with it 1,004 feet will not keep the record for a long - apartment building 432 Park Avenue (completed by 2015) will be even taller. And the planned building  on 227 West 57th has enough air rights to rise 1,550 feet.   Six-bedroom, seven-bath penthouse with a library in 432 Park avenue is already under agreement for $95 million. So sky is the limit!

Haute Living:One57 Penthouse: Most Expensive Manhattan Property Ever for $110 Mil