My favorite   Wiki says that  in  the United States the holiday season "is generally considered to begin with the day after Thanksgiving and end after New Year's Day". 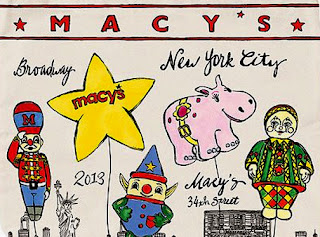 The Macy's Thanksgiving Day Parade is the official kick-off of the holiday season.

In 1924, the parade,  originally known as the Macy's Christmas Parade and later the Macy's Thanksgiving Day Parade  was staged by the Macy's department Store.
In the 1920s, many of Macy's department store employees were first-generation immigrants from Europe. They wanted  to celebrate the parade of Thanksgiving in New York with the type of festival their parents had loved.
The employees marched six miles, from Harlem to Herald's Square, dressed as clowns, knights and cowboys.  Marching bands and animals from the Central Park Zoo accompanied the parade's first floats: The Old Lady Who Lived in a Shoe, Miss Muffet and Red Riding Hood.  Little Red Riding Hood, also known as Red Cap  is a French and later European fairy tale about a young girl and a Big Bad Wolf. "There Was an Old Woman Who Lived in a Shoe" and "Miss Muffet"  are  popular English language nursery rhymes:

There was an old woman who lived in a shoe.

She had so many children, she didn't know what to do;
She gave them some broth without any bread;
Then whipped them all soundly and put them to bed. 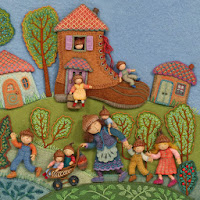 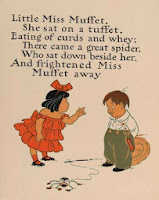 Little Miss Muffet
Sat on a tuffet,
Eating her curds and whey;
Along came a spider,
Who sat down beside her

And frightened Miss Muffet away

In 1928, helium was used to fill the balloons and hold them in the air. Felix was filled with helium and without a plan to deflate the massive balloon, NYC parade organizers simply let Felix fly off into the sky.


From 1928-1933, the giant balloons were released at the end of the Parade and after the first year of releasing them, the balloons featured a return address label and prizes for the return of the balloons - those who found one could return it to Macy's for a $100 reward. In  1932 parade a  pilot attempted to capture a balloon and nearly crashed.


Floats were pulled by horses until 1939, when NBC broadcast the parade for the first time.

The parade was suspended between 1942-1944 when the balloons were recycled into 650 lbs. of rubber and donated to the war effort.
The parade returned in 1945 and was shown on television for the first time. Prior to television, the country listened to the parade on radio.
In 1958 with a helium shortage, the balloons were inflated with air and hoisted up with cranes for the Parade. Now Macy's is the world's second largest consumer of helium. The United States government is the first one.

Macy's Thanksgiving Day Parade in 2012 was attended by more than 3 million people and watched by 50 million on TV. Shredded police documents containing Social Security numbers, names of detectives and even a mention of Mitt Romney’s Long Island motorcade rained down on   as part of the confetti used for the Macy’s extravaganza. 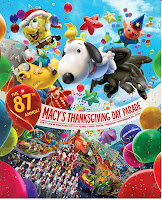 Over the past few decades, Macy's Balloon Inflation has become a pretty huge event itself. On Wednesday, Nov. 27, from 3 p.m. to 10 p.m., the balloons are prepped and inflated on the streets around the American Museum of Natural History, at Columbus Avenue and West 77th Street. The entrance to the inflation viewing is on 79th Street, and from here you can walk south along Columbus Avenue, east on 77th Street, and then north on Central Park West.
Inflation night gets packed, particularly later in the evening, after 6 p.m. - arrive earlier!


There is still one parade tradition that’s relatively crowd-free: the deflation, which takes place right after the parade ends on Nov. 28, usually on and around the side streets near Herald Square. 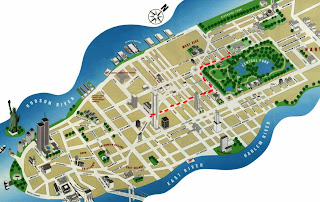