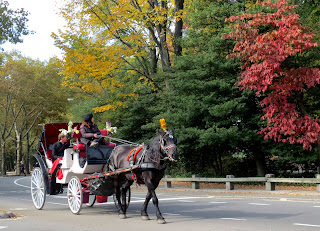 A ride through Central Park in a horse-drawn carriage is one of New York City’s most iconic attractions, immortalized in books, movies, TV, and Broadway plays.  Horse-drawn carriages may be a thing of the past when the new mayor takes control. The horses that power the industry may be sent to slaughter.
(Read more in Daily News)

When Olmsted designed Central Park in 1858 he created  curving drives to offer beautiful vistas while driving.


In 1863, the first exclusively tourism-based carriage rides were offered for a fare of 25 cents a passenger.  The Central Park stage line operated at that rate for the rest of the 19th century.  During the pre-World War II period  there were only fifteen carriages on the park.  In the late 1940s or early 50s   New York City sold 68 medallions to a few stable owners for a fee of $100 to $200. 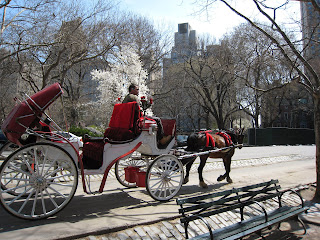 More than half of NYC’s carriage horses are in Clinton Park Stables ( 618 W. 52nd St.) ,  opened in 2003. The stable was originally built in the early 20th century to house the freight horses for a cardboard company.  The second-largest carriage stable in New York is West Side Livery,  in a  Hell’s Kitchen.
The two most popular rides through Central Park are the "standard ride" , 20 minutes long  down one of the Park's original carriageways with a price $50,  and the "long ride" , 40 minutes and $90. 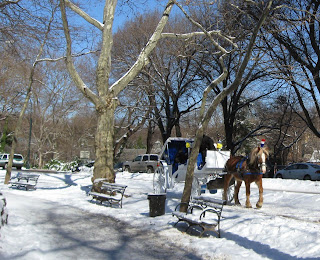 The city’s licensed carriage horse industry — 68 carriages, 216 horses and 282 drivers — brings in roughly $15 million annually, officials estimate. Drivers charge $50 for a 20-minute ride through Central Park, and $20 for each additional 10 minutes. On a good day, they can make 15 trips, grossing at least $750 plus tips
Under city law, the horses are not allowed to work more than nine hours at a time. They must be covered with blankets in the winter and must be taken off the streets if the temperature hits 90 in the summer. (Read more in ABC News)
“Carriage horses have traditionally been a part of New York City,”   said Mayor Michael Bloomberg,  who consistently supported the horse-drawn carriage industry . “The tourists love them…. They ( the horses)  are well treated, and we’ll continue to make sure that they are well treated.”  (Read more in New York Times) 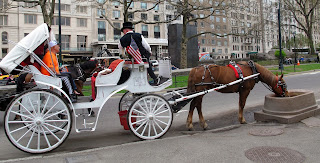 Three weeks before the city's November 5 mayoral election, the top candidates both support ending the practice and say they are open to alternatives, like replacing the horses with 8-seat electric cars.

"We are in the biggest, densest urban area in North America. It is not a place for horses. They are not meant to be in traffic jams," Bill de Blasio said said at a press conference with New York Class, an animal rights group.
Activist groups leading the charge against horse carriages say the animals will be fine, but experts have a different opinion. 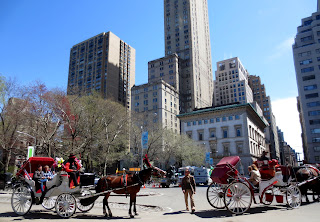 It costs at least $200 a month to care for one retired horse, experts say, so the tab for sending 200 horses to live out their days   would start at $480,000 a year. Based on the average age of the horses clip clopping through Central Park, and their life expectancy, the total cost could climb past $8 million over their lifetimes.  It is very possible that the animals could be destroyed due to the expensive maintenance and the effort to "rescue" the horses could lead to their slaughter instead. 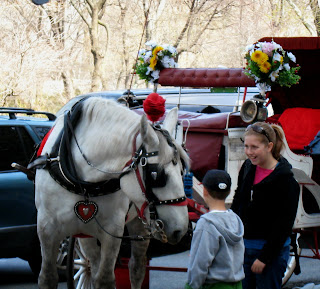 Mayor Michael Bloomberg  resigns in December, after 12 years shaping everything in the Big Apple.  And the days the days of carriage horse rides through Central Park are numbered.
So if you plan take a romantic carriage ride around beautiful Central  Park as  Woody Allen and Mariel Hemingway did  (  "Manhattan")  or like to  hide in  a horse drawn carriage like  Kevin  (“Home Alone 2”)- do not wait. Hurry- it could be too late!