Steinway & Sons company was founded in  1853 by German immigrant Henry Steinway. Steinway Hall, 88-year-old  historic and cultural landmark on 57th Street down the block and across the street from Carnegie Hall, was  sold in August 2013. 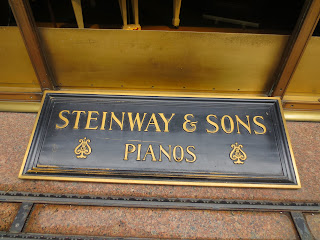 The concert hall was designed with 2,000 seats, and had a concert stage for a full 100-piece symphony orchestra. It became New York City's artistic and cultural center, housing the New York Philharmonic until Carnegie Hall opened in 1891.
In 1872, Steinway & Sons organized a concert tour of 215 performances in 239 days for the Russian virtuoso pianist Anton Rubinstein.  to promote his piano.  Rubinstein's legendary concert at the Steinway Hall was sold out with 3.000 guests, many of them standing.William Steinway, the son of the company founder,  said: "One concert on Saturday night, sells pianos on Monday morning ".
﻿﻿In 1902 the 100,000th Steinway Piano was built  for President Theodore Roosevelt.  It was gilded with gold leaf, and American Eagles were  carved on the legs. Today the historic Gold Steinway stands in the First Ladies Hall of the National Museum of American History.
In 1925, Steinway Hall opened to its current location  in a newly constructed   16-story building  on West 57th Street near Carnegie Hall.  The building was built   by Warren and Wetmore - the same company that built Grand Central  in 1913.
A music themed sculpture of Apollo and the muse of music topped arched entrance. The top of the house  was designed to be part of a penthouse apartment for the president of Steinway, but was turned into a radio studio.  The two-story rotunda is the real centerpiece of Steinway Hall. The main rotunda seats up to 300 guests and a small symphony orchestra.

The mezzanine has  soundproofed rehearsal rooms, named after members of the Steinway family. Each room has a Steinway piano that is equipped with a  connection to personal computers. The only room not named for a Steinway is the Rachmaninoff room, which contains a large portrait of the virtuoso. 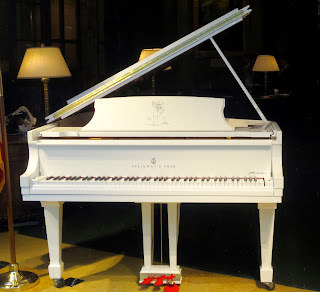 The official opening night of the hall was on October 27, 1925 with a performance by Philharmonic Orchestra before 300 invited guests of New York society,  including four Steinway grandson,  Sergei Rachmaninoff,   Andrew Carnegie, Guggenheim and  DuPont.  The entire performance was broadcast over the radio.
According to legend, it was in the Steinway basement that Vladimir Horowitz and Sergei Rachmaninoff met for the first time. There they played Rachmaninoff’s third Concerto. This piece became Horowitz’s trademark.
The building now bears the name of the current owner, the British publisher, The Economist.  Despite having its “name on the door”, The Economist is nowhere on the premises. Its offices are at 750 Third Avenue. 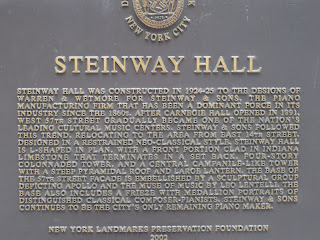 Below street level is the world famous Steinway Basement with  the Steinway “piano bank” where piano professionals come to select instruments they will use in concerts, in recordings, and on tour.
In August 2013   Steinway agreed to be acquired by Paulson & Co., the hedge fund owned by billionaire John Paulson for $512 Million. Steinway said that under the terms of the deal, it could remain in the building on 57 street  for up to 18 months.


Paulson became a billionaire by short-selling subprime mortgages in 2007 and made $3.7 billion that year.  In 2010, he beat a hedge-fund record by making nearly $5 billion. His fortune was made largely from the collapse of mortgage backed securities market. Paulson owns three Steinway pianos  and says he’s planning on buying a fourth. Within a day of the announcement, he sent a letter that said he was not going to change a thing in how Steinway builds pianos....