The statue of Liberty at East 61st

The statue’s fame has led to it being copied on myriad occasions.  Kitsch tourist souvenirs   could be found at every  souvenir store in New York.   A  30ft replica  resides in the Brooklyn Museum.

There is one copy that stands  near the building  at East 61 that  almost nobody know about.


The story began  in  1920s  when  Max Stern emigrated     from Weimar Germany to the U.S.  His   textile business became  unprofitable  and Max decided to   go to U.S.   In order to earn  money he brought 2,100 canaries from Germany to sell on the U.S. market. Next   thirty years   Max had  been selling caged birds, bird cages and other pet bird supplies to U.S. through Woolworth's stores. Stern named his family business   Hartz Mountain Corporation (HMC)  after the Harz Mountains of Germany. 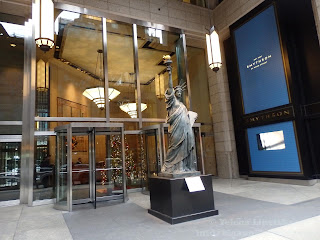 Later Max   became the   vice-chairman of the board of trustees of Yeshiva University for whom its Stern College for Women was named.

His son Leonard  initial wealth was inherited from his father who died in 1982. Leonard  Stern is listed by Forbes magazine as a billionaire  and New York University's business school is named after him. In 2011 Leonard has acquired a rare 9-foot-tall scale-model replica of the Statue of Liberty.


The Statue of Liberty's French creator, Frederic-Auguste Bartholdi, started his work with a plaster sculpture.  This plaster sculpture,  the original model of the Statue of Liberty,  is in   the The Musée des Arts et Métiers,    an industrial design museum in Paris. Among the museum  collection is an original version of the Foucault pendulum, by Auguste Bartholdi, some of the first airplanes  and the first mechanical calculator by Blaise Pascal.


For more than 100 years, the original Statue of Liberty plaster sculpture could not be reproduced for fear that it would be damaged in the process. A new digital imaging process was developed without damaging the original. The statue was recast using the classic lost wax method.  Leonard   Stern, the owner of  the replica, says it's the only model in  in the United States. Only 12 bronzes are being made.   The other bronze copy the on view in the   Musée des Arts et Métiers,


This replica cost more than $1M US, and was installed in New York in October 2011.