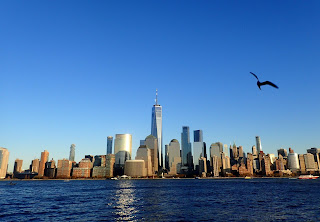 The iconic Manhattan downtown skyline is stunning. New York is one of those cities that has a skyline that demands to be photographed.  It's a New York truism that for the best views of Manhattan, you need to rise above the island or leave it. One of the easiest and cheapest ways  to do it is to take the PATH train and go  across Hudson to   Jersey City, New Jersey.
The PATH train system is the default choice for those who want a fast inexpensive ride from New York to Jersey City.


The PATH system is a rapid transit system which operates 24 hours a day, 7 days a week, 365 days a year. It travels between New York and New Jersey, providing a vital link between the two regions for commuters, tourists, and other travelers.

The station in New York was originally opened on July 19, 1909, as Hudson Terminal, urban railway station on the Hudson and Manhattan Railroad   in a neighborhood called Radio Row.   Two 22-story office skyscrapers were  built to serve the terminal.   Combined rail terminal and office block was the first of its kind anywhere in the world.  These   two   buildings, identically designed,    were the predecessor to Twin Towers. 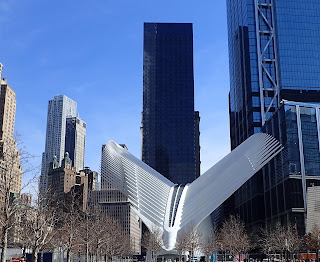 Skyscrapers were torn down, rebuilt as World Trade Center. The newly built   station opened on July 6, 1971 was connected to the World Trade Center towers via an underground concourse and a shopping center.
On September 11, 2001, the station was shut down  after the first airplane hit the North Tower. With the station destroyed, service to Lower Manhattan was suspended for over two years and later  replaced with the temporary  PATH station,  constructed at a cost of $323 million. In early 2004, the Port Authority, which owns the land, modified the initial  master plan  for the 9-11 site   to include a large transportation station.
World Trade Center Transportation Hub (the Port Authority of New York and New Jersey's formal name for the new PATH station and the associated transit and retail complex)   opened on March 3, 2016. It was designed by Spanish architect Santiago Calatrava. 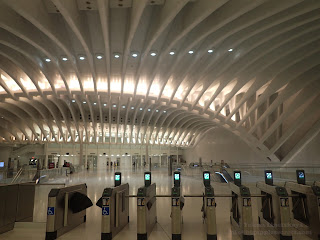 New York Daily news said in February 2016: " The centerpiece of the hub is the Oculus, a cavernous hall that features white steel ribs reaching to the structure’s apex to form a skylight called the Wedge of Light. Outside of the hub, steel arches jut from the center of the Oculus in a design that project architect, Santiago Calatrava, likened to a bird being released from a child’s hands. The Spanish architect and engineer said he hopes the design — a “message of love to the city” — inspires optimism and exemplifies the tenacity to rebuild after the devastating terror attacks.“We have put here all of our heart, each one of us, in the hope that people will read the message,” Calatrava said." 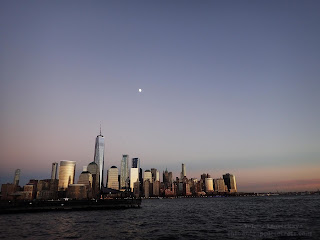 The best time to go to Jersey City using PATH is around sunset, even though the sun sets behind you. This view is awesome and you'll feel like a local.
The PATH 2-Trip MetroCard may be purchased with cash only from dispensers at all New Jersey stations, as well as from dispensers at World Trade Center.
The best place to enjoy the view  is only one stop  from PATH station.  It is Hudson River waterfront in the Paulus Hook neighborhood of Jersey City.
The view of Downtown Manhattan is mesmerizing, especially from the    place near Colgate Clock. 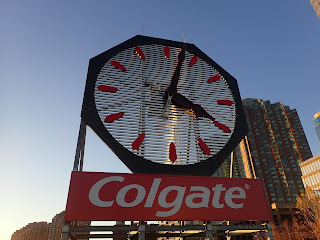 The  octagonal Colgate clock, facing Manhattan, dates back to 1924.  It is located on the former site of Colgate-Palmolive & Company,   a $15.6 billion global company serving people in more than 200 countries.  Colgate-Palmolive’s history traces back to the early 19th century when William Colgate, a soap and candle maker, began selling his wares in New York City under the name William Colgate & Company. 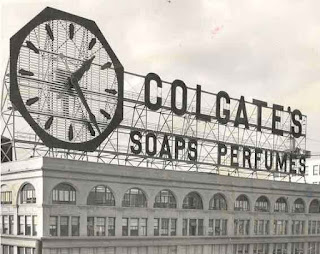 The ten-story office building at 105 Hudson Street in the Exchange Place area of Jersey City   served as the corporate headquarters   from 1910    to 1956.  The building  was immediately north of the company's large Jersey City manufacturing plant. The clock made its debut on top of the old Colgate factory in December 1924. It was designed so it could be seen and read from a great distance, and for years it was considered the world’s biggest time piece.   The clock's design was inspired by the shape of a bar of Octagon Soap, first manufactured by Colgate as a laundry cleanser. The minute hand is 25 feet, 10 inches long; the hour hand is 20 feet long. The entire complex was razed in 1988, and the clock, without the toothpaste tube, was lowered to ground level as a freestanding icon. 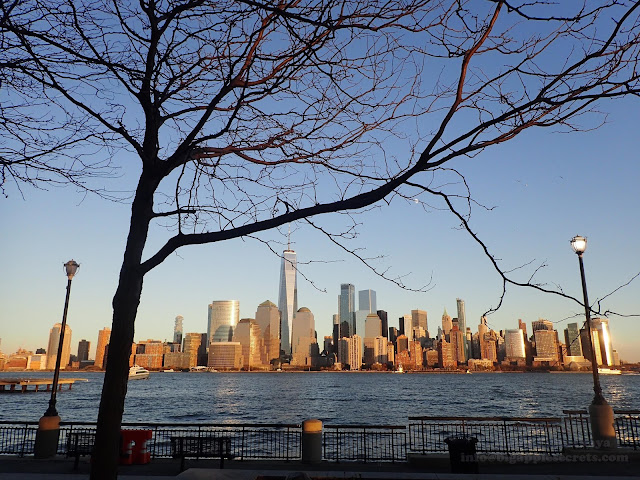