Angel of the waters in Central park 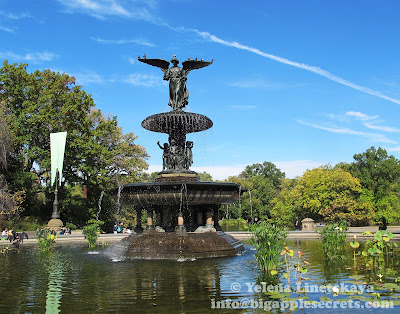 In 1853, the New York State government set aside 750 acres  in the middle of Manhattan to create landscaped public park.  Five years later   a contest was won  by  Calvert Vaux  and Frederick Law Olmsted. They submitted entry #33, also known as the "Greensward plan" .  In the  plan designers   envisioned a wide Promenade  that led to a grand terrace overlooking the Lake and fountain.

The terrace was one of the very first structures to have been built in Central Park. Construction began in 1859, continued throughout the Civil War, and was completed in 1863. 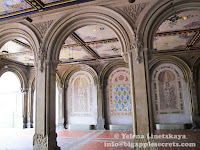 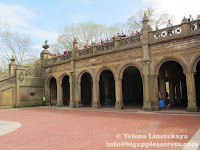 There are two levels on the terrace- lower and upper. These levels are connected by two grand staircases and a smaller one leading directly to the Mall.  The highlight of the arcade located on the lower level  is the magnificent tile ceiling made out of    more than 15,000 colorful  tiles, made by England's famed Minton Tile Company.   Bethesda arcade is the only place in the world where these Minton tiles are used for a ceiling. The same company did tiled flooring for the United States Capitol.

The gorgeous focal point of the Bethesda Terrace, the Bethesda Fountain is one of the largest fountains in New York, measuring twenty-six feet high by ninety-six feet wide. 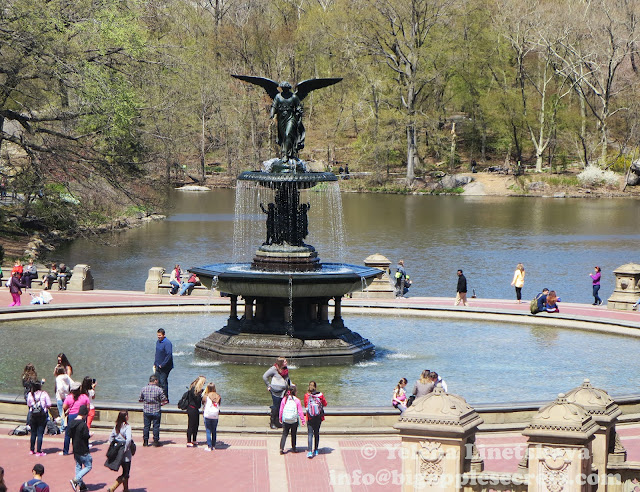 In 1864   sculptor Emma Stebbins  received the commission for the sculpture  in the middle of the fountain that would be the terrace's centerpiece. The sculpture  was the only major sculpture commissioned for the park during its original design and construction


Emma Stebbins was among the first notable American women sculptors in US. She was   born  in  1815  to a wealthy family in New York City. In 1857, sponsored by her brother Henry Stebbins, head of the New York Stock Exchange, Emma Stebbins moved to Rome. In Rome she met Charlotte Cushman, the most famous English-language actress of the mid-nineteenth century. Stebbins fall in love,  and they decided to spend their lives together.

Stebbins' best-known work is Angel of the Waters at Bethesda Terrace,  unveiled in late May 1873. A bronze figure with  her arms reach downward, blessing the water below,  celebrates  the clean water New Yorkers received from Croton Aqueduct, that  first brought fresh water to New York City in 1842.  The angel carries a lily in her left hand — a symbol of the water's purity, very important to a city that had previously suffered from cholera epidemic before the Croton system was established. 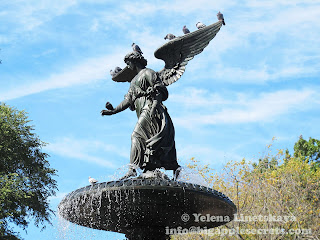 There are  four cherubs at the bottom of the fountain. They represent temperance, purity, health, and peace.


Cast in Munich, the statue was finally dedicated in Central Park five years later. At the dedication, the brochure quoted a verse from the Gospel of St. John 5:2-4: "Now there is at Jerusalem by the sheep market a pool, which is called…Bethesda…whoever then first after the troubling of the waters stepped in was made whole of whatsoever disease he had."
Over the decades, the terrace and fountain deteriorated. In a 1960’s  it   had become, as Newsweek went on to say, the “craziest, gayest gathering place in the city.” It was a hippie hangout, known for people protesting the Vietnam War, smoking marijuana, playing guitars, and causing general havoc. By the 1980s fountain was in terrible shape. It was littered with unwelcome carvings, graffiti, and broken stairs. In the 1980s, the tiles from the arcade ceiling were placed in storage. 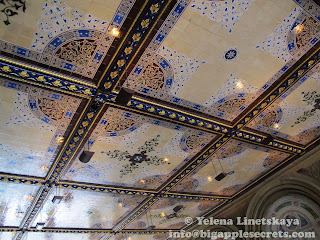 
Twenty years after in 2007  thanks to generous donations the tiles were restored.   The Park Conservancy employed a team of seven conservation technicians who cleaned and repaired about 14,000 original tiles by hand.  Fully 8 million dollars was spent restoring the Terrace and Fountain to what they looked like when originally designed.
Posted by Секреты Большого Яблока