The American writer O.Henry and his favorite bar 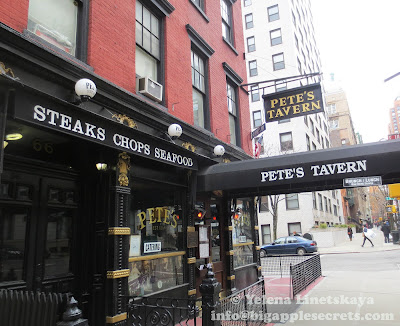 William Sidney Porter is much better known under his pen name "O. Henry." He was born in   1862 in North Carolina and  moved to New York City in 1890 where over the next ten years before his death in 1910, he published over 300 stories and gained worldwide acclaim as America's favorite short story writer.  In New York he rented a room at  55 Irving Place. There was a tavern  on the corner across the street from O'Henry's room where    he did drink  frequently.


This  tavern even appeared  in one of his stories, The Lost Blend :" The saloon (whether blessed or cursed) stood in one of those little "places" which are parallelograms instead of streets, and inhabited by laundries, decayed Knickerbocker families and Bohemians who have nothing to do with either." 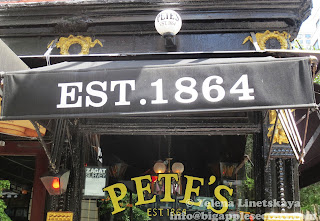 By the way there is a  scotch Whisky "The Lost Blend" with the name    inspired by the story about life in a New York bar featuring two business partners who try to recreate a blend of spirits with close to supernatural properties.

Pete's Tavern is the oldest continuously operating restaurant  and  bar in New York City.  In the beginning, and during the early development times of Gramercy Park,  the building at 129 East 18th Street was the Portland Hotel - a local inn that provided rooms to residents and visitors to the area.  In 1852, a grocery and grog shop opened on the first floor of the hotel. In 1864 the store was converted into saloon. 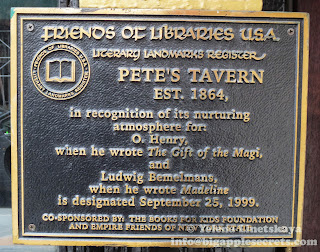 A forty-foot, carved bar made of rosewood was installed atop the black and white tiled floors. The bar area featured a few tables and large wooden booths lined along the walls while the back dining room offered additional booths and tables. Gas lamps, including an ornate chandelier that hung over the cashier case, which remains to the right of the bar, lit the entire tavern.
Cafe was bought in 1899 by Irish brothers Tom and John Healy, and became Healy's.     In the early 1900s, it became a favorite of Tammany Hall politicians as their headquarters were located just a few blocks south on 14th street


During prohibition, when selling alcohol was illegal, the bar continued to operate disguised as a flower shop.
O' Henry supposedly wrote  The Gift of the Magi, sitting at one of the tables covered with red-and-white-checked cloths. The decor hasn’t changed and tavern  is proud of its heritage.   The name of the place was changed to Pete's when in Pete Belle purchased the bar in 1932. 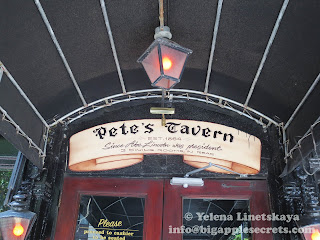 The tavern atmosphere is superb and the sidewalk seats are on one of Manhattan's more charming streets. Pete’s doesn’t so much cater to the wealthy neighborhood dwellers it once did. It serves mostly as a place for happy-hour drinks and NYU students who wander into it during their nightly pub crawls. The beer selection isn’t extensive, but they do have a few Belgian and German brews on tap for those interested in an outside-the-box option. The prices are very reasonable- you can have  saloon Sandwiches served with cup of soup and potato salad for lunch for 10 dollars.