A million dollar view for 1$

A million dollar view  for 1$? Is it possible? Yes- everything is possible in New York - you just have to know where to find it!   The Roof Garden, located  on the roof  of Metropolitan museum of art near the southwestern corner of the building  offers  spectacular  views of the Manhattan skyline form a vantage point high above Central Park.  The Garden's cafe and bar is a popular   spot in summer months, especially on Friday and Saturday evenings.


The roof garden opened to the public in 1987 and was named after Iris and B. Gerald Cantor. Bernard   Cantor   was the founder and chairman of securities firm Cantor Fitzgerald.  On September 11, 2001, the firm lost 658 of its 960 New York employees in the World Trade Center attacks.  Cantor  started out as a boy selling hot dogs at Yankee Stadium and later became a wealthy financier and philanthropist. He was the owner of the world's most comprehensive collection of Rodin sculpture in private hands.

Cantor said in his interview  in 1968:  "I was at the Metropolitan Museum one day and saw Rodin's 'Hand of God,' and I was fascinated by it. In 1947, I saw another version of 'Hand of God' in a Madison Avenue gallery and I bought it"; in the mid-1950's, "I bought Rodin's 'The Kiss,' and then it really started. It brought back to me the feeling I had before."
In 1987  Cantor had given the Brooklyn Museum more than 50 sculptures by Auguste Rodin.   In the same 1987 the garden on the roof on Metropolitan Museum of Art  was open. 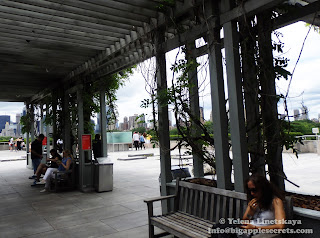 When the garden opened to the public   John Russell, chief art critic for The New York Times, wrote: "It is in essence a private place, on an intimate scale. It is paved with large and generous flagstones that urge us to take it easy and head for the benches. On all four sides, the outlook is simply stupendous."
Every summer since 1998 the roof garden has hosted a single-artist exhibition. This year rooftop installation is looking a little spare. The exhibition is far less flashy than Dan Graham and Günther Vogt’s manicured lawn, vine-covered structures, and glass architecture that transformed the Met’s roof last year.  Last year I loved a  green grass-like carpet that covered the floor of the garden. This year the uneven floor—tiles stacked here, removed there—was meant to evoke the idea of the museum as a ruin.


An outdoor installation by the French conceptual artist  Pierre was supposed to feature the carcass of someone’s deceased pet cat—an element that resulted from weeks of research with scientists and other experts to figure out how to effectively turn an animal carcass into a kind of metal sculpture. Fortunately it did not happen. “In his project at the Met, Pierre has approached the Museum as if it were a mine by excavating the site and incorporating objects that are sourced within the Museum collection, its architectural layers and the geological history of Central Park, ” said Sheena Wagstaff, the Met’s chairman of Modern and Contemporary Art. She added, “The resulting matrix of mutating organisms manifest themselves over the summer providing a unique experience each time.”

To tell the  truth I' m not sure that aquarium housing two ancient aquatic species with a volcanic rock floating on the surface or  large chunk of Manhattan bedrock and bald spots where granite floor tiles were removed to reveal dirt, pebbles and other debri is art. But the air is fresh, the  view  is to die for. Museum works late on Friday and Saturday, and fee is suggested- so as I promised at the beginning of the post - you can find a  million dollar view  for 1$!
Posted by Секреты Большого Яблока