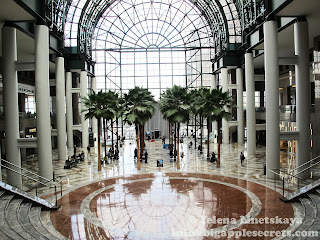 Brookfield Place ( World Financial Center)complex was designed by César Pelli,   an Argentine American architect known for designing some of the world's tallest buildings.

It was   built  between 1982 and 1988 at a cost of $60 million on landfill that was  excavated during the building of the World Trade Center, as well as garbage, dirt and debris. The most remarkable part of the complex was its' atrium- Winter Garden with palms.
10-story enclosed glass atrium structure with a glass and steel telescopic barrel vault roof and cascading marble semicircular staircase, leading to a grove of 45-foot palm trees,  was connected to the World Trade Center via a 400 ft pedestrian bridge. 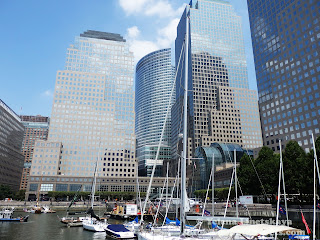 Every spring  starting from 1991 there was an Orchid  show in Winter Garden. I visited the show in summer, 2001 -  it was spectacular! More than 70,000 people attended the four-day show.  Exhibitors displayed more than 5,000 flowers. 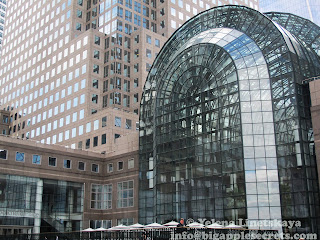 On September 11, 2001  columns from World Trade Center 1 hit the east end of   Winter Garden structure. The bridge  that linked Financial Center to WTC was destroyed.    Two of the palms perished immediately, when huge pieces of steel from the north tower pierced the skylight and rooted in the atrium floor.  The remaining trees were thickly coated with toxic dust.

The collapse of the twin towers closed the garden for a year. The atrium underwent a $50 million reconstruction, which included replacing 60,000 square feet of marble and 2,000 panes of glass or nearly 70% of the arched ceiling, half of the grand staircase and the marble flooring, and all 16 of the 40-foot Washingtonia   palm trees. 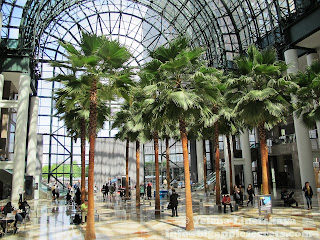 In 2002 New York Times published an article about Winter Garden:
"When the Washingtonia palms were first selected for the Winter Garden  ,  it was an experiment  said Mr. Sullivan, one of the original consultants. ''We didn't know that they could survive in such an arid space with such low light levels.''
The new palms had been growing in Florida, which supplies some 70 percent of the world's indoor trees. The 15-year-old trees, which had been grown from seedlings in northern Florida, were moved down south to a 50-foot-tall shade house in Wellington, the only one of its height in the country. It approximated the light-level conditions of the Winter Garden atrium with black polyurethane shade cloth. Before 9-11 the palms had full sun only from 2:30 p.m. till dusk; now they'll have an extra half day of light.

For the 1,500-mile trip north, the palms were wrapped in burlap: four trees fit on each 48-foot-long flatbed trailer, the longest that is permitted in Manhattan. The original Winter Garden trees were replaced after nine years, weakened by low light levels and urban stress. The new trees are expected to flourish longer, thanks to the enhanced exterior light and a backup bank of 60 ceiling sun lamps putting out 30,000 watts of illumination, more than in some baseball stadiums."


Reopened on September 17, 2002, the Winter Garden was the first major structure to be completely restored following the attacks. President George W. Bush was present at the reopening ceremony.


In  October 201 , 3.1 million of the five-building complex’s 8.5 million square feet were up for grabs — a staggering 41 percent vacancy. To attract new tenants  Brookfield has embarked on a $250 million renovation that was   completed by 2014. Today, the vacancy rate is under 5 percent.


Together the whole complex  covers eight million square feet by the Hudson River, and includes the headquarters of Merrill Lynch, American Express, and Dow Jones.  Restaurants and bars are designed to look like they occupy an outdoor courtyard with palms, have "open-air" seating. The perimeter of the second floor overlooks the Courtyard and hosts exhibits in a gallery space. 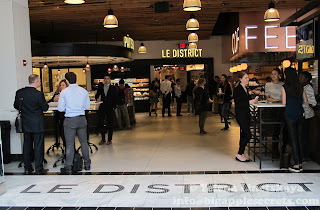 European-style marketplace,    adjusted to the   Garden  with palms, opened two years ago. A French marketplace with a patisserie, chocolatier and  full service restaurant opened half a year ago. The outdoor plaza, which connects   Winter Garden to the Hudson River, is surrounded with beautifully landscaped seasonal gardens along the riverside and reflecting pools. 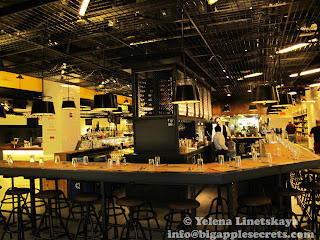 
For those in the area who need an hour or two to rest, recharge, and regroup - there is no better place than Brookfield Place. It is warm and dry in winter, and  refreshing in hot summer. Come here during sunset for spectacular sights.
Posted by Секреты Большого Яблока