6 1/2 Avenue - a new name on the map of New York, Midtown shortcut and a rain shelter.

The street layout of Midtown Manhattan  is  simple : it is a grid.  The main avenues are numbered 1 - 11 with 1st being on the East Side starting at the East River. This  grid became a little more flexible   less than a year ago-  a new pedestrian   mini- avenue with  a name 6 1/2 appeared on the Map of New York.

In 1961 Zoning Resolution inaugurated the incentive zoning program in New York City. The program encouraged private developers to provide spaces for the public within or outside their buildings by allowing them greater density in certain high-density districts.

In the decade and a half that followed, 70 percent of the buildings that qualified to earn a bonus took the incentive—some 67 buildings between 1966-1975.  In exchange for creating a through block arcade, for example, developers received six square feet for every square foot of public space. 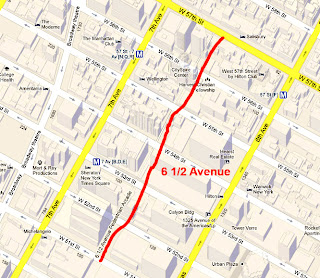 The City’s longest chain of arcades includes  six blocks between 51st and 57th streets, between Sixth and Seventh Avenues. Most of these arcades were constructed after the 1986 rezoning of Midtown which required new mid-block developments to provide more spaces for the public.

In August 2012 the NYC Department of Transportation completed a plan to improve the accessibility and visibility of the chain by installing crosswalks and street signs. 6 1/2 Avenue was officially born.

This avenue starts from AXA Building at 787 Seventh Avenue, between 51st and 52nd. This arcade connects two streets while also inviting people to look around or sit down. There are two sculptures of English sculpture Barry Flanagan at the  both ends of this block- Hare and Elephant.

The arcade  at 146 West 57th Street is the end of  the 6 1/2 Avenue chain. It provides direct access through the block to 57th Street.  This is the lobby of Metropolitan Tower and has a security guard and doors at either end.


The best thing of this new avenue is that on a rainy  day  you not need umbrella!