Inside Out project on Times Square. 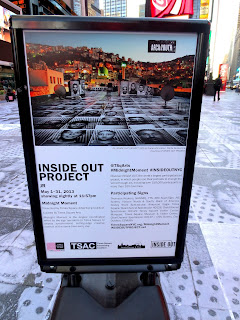 Every day more than 400.000  people visit the center of the center – Times Square in New York.  And every midnight for three minutes  Crossroads of the World  is converted into movie theater featuring a film "Times Square Moment: A Digital Gallery ".
Every show begins at 11:57pm with a "countdown" that signals the start of the 3 minute nightly presentation. Content changes monthly; selected works are announced in the weeks preceding the start of a new show as are the exact signs participating in that month's selection. 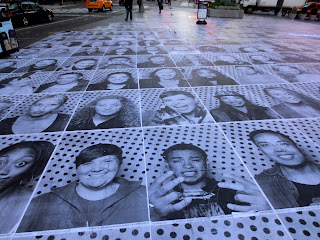 This film uses footage from the  documentary film, “INSIDE OUT: THE PEOPLE’S ART PROJECT”, which premiered at the Tribeca Film Festival on April 20th.  "Inside Out Project"   is the international art project that allows people to get their picture taken and paste it to support an idea and share their experience.  The images were  uploaded digitally and printed as posters. As of March 2013, over 130,000 people from more than 100 countries have participated.


All  five boroughs of New York are involved in this project:  The photo booth truck made visits to the Bronx, Staten Island, Queens, and Brooklyn.
The Inside Out Project was launched in 2012 by the  young ( 32 years) French artist JR whose identity is unconfirmed . JR began his career as teenage graffiti artist ,  then he documented the process  of graffiti painting. When he was 17 he began applying photocopies of these photographs to outdoor walls.
Between 2004 and 2006, JR created Portraits of a Generation, portraits of young people from the housing projects around Paris.  In 2007, JR put up photos of Israelis and Palestinians face to face in eight Palestinian and Israeli cities on either side of the Separation Barrier.

The Times Square Advertising Coalition  (TSAC) is a trade association of  businesses involved in the outdoor sign industry in Times Square. The public arts program of TSAC presents Midnight Moment: INSIDE OUT PROJECT on Times Square  by anonymous  French artist JR.
JR stated: "I wish for you to stand up for what you care about by participating in a global art project, and together we'll turn the world inside out."  In September 2012, 78,602 photographs had been printed as posters for 4,456 projects in 9,564 different locations worldwide.