Rodin Studios building at 200 West 57th Street, at the southwest corner of Seventh Avenue  across from Carnegie Hall was built in 1917 by Cass Gilbert , a prominent  American architect, mostly know  as an architect of  Woolworth Building.  The studios were designed especially for the artists and it could explain the name - prominent French sculptor Auguste Rodin  died in 1917.


Rodin  is best known for "The Thinker”,  that was originally named "The Poet" as a depiction of Dante Alighieri in front of the Gates of Hell. There is a Rodin museum in Philadelphia with the largest collection of Rodin's works outside Paris.

It is  hard to find  affordable   space  with a good light anywhere in NYC.   Rodin studios is one  of these buildings.

At the early days of  the XX century  several artists  organized together into a company  and built a house for themselves and  for other  artists. The three key artists behind the construction were painters who had received training or taught in France, and who were influenced by French art. 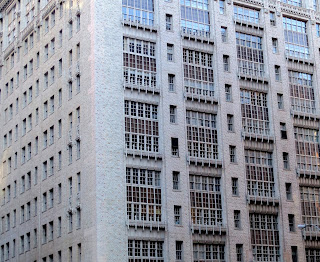 The different street facades of the Rodin Studious  show that apartments and studious  are  very different. There are traditional apartment that can be found in any building and double-height studios.


The street level was reserved for retail stores and the second and portions of the third floor were leased as business offices, affording extra income for the cooperative. 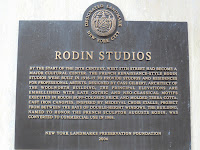 On July 15, 1917 The Sun reported that “The suites are appealing to artists because of the large studios which front on Fifty-seventh street, thereby securing the north light.  These studios are from 21.6 feet to 25 feet wide and are 29 and 30 feet long.  Then there are upper studios or balconies off which are the sleeping chambers and other compartments.”  The newspaper added that “The house is so planned that it is possible for a renter to get almost any amount of space desired and arranged to his satisfaction.”

A well known artist Boris Anisfeld   lived in Rodin apartments the 1920’s.  Anisfeld was  born in Bieltsy, in the Russian province of Bessarabia.    In  Russia he worked with the Vsevolod Meyerhold and Sergej Diaghilev. He exhibited in Paris along with Larianov, Gontcharova, Serov, Vrubel and others.


Anisfeld arrived in New York in 1918 with a  recommendation letter  from V. D. Nabokov   and had an exhibition   at the Brooklyn Museum of Art.

Within weeks of his arrival in New York he began working on set designs for the Metropolitan Opera. This allowed Anisfeld and his family to live comfortably in New York, while his paintings continued to find eager buyers. By the end of the 1920’s   Anisfeld accepted  the  offer of a teaching position at the Art Institute of Chicago and moved there. He remained there until he retired in 1958.


American writer Theodore Dreiser lived in  Rodin Studios. He moved there in 1927, when he was already a celebrity, with his wife and they had their  Thursday evening receptions in the duplex they rented.


In 2006-2007, the building owners initiated a full restoration at a cost of more than $2 million.  Nicholson & Galloway was hired in 2006  to  perform a full exterior façade restoration. The firm  completely removed the existing  linear feet terra cotta cornice and replaced it with new structural steel and new Glass Fiber Reinforced Concrete units.   Three corners of building were reconstructed with new terra cotta brick units and reinforced steel.  Approximately 400 pieces of failed terra cotta were replaced with new matching cast stone units. In 2007 the building  was  sold to The Feil Organization for $125,735,000 million.