Sandy: one year after

Tuesday,  October 29, will mark exactly one year after Superstorm Sandy made a landfall.  set several records. It  At $65 billion, Sandy was the second costliest storm in US history and  the second tropical system starting with an "S" ( among other 76 names) to have its name retired. The name of the storm is retired if  it is felt that a storm is so deadly or damaging that the future use of its name would be inappropriate. By the way,  the name   Irene ( hurricane Irene made a landfall exactly at the same town  in New Jersey a   year before Sandy)   was also retired.


Sandy  was the first time in modern recorded history that a storm took a sharp turn to the west and hit. Sandy set historical maximum recorded water levels  (13.88 ft. -  4.2 meters)  at the Battery Park  in Downtown, New York. A full moon made high tides 20 percent higher than normal and amplified Sandy's storm surge. The East River overflowed its banks, flooding large sections of Lower Manhattan.
More than 12,000 flights were canceled, there was no trading for two days on Wall Street as a result of the storm damage. The last time the New York Stock Exchange closed for two consecutive days for weather-related reasons was 1888.
The Greenwich Village Halloween parade was postponed for the first time in the parade’s 39-year-history.
This year  is the  40th Anniversary Parade, Hallelujah Halloween revival. 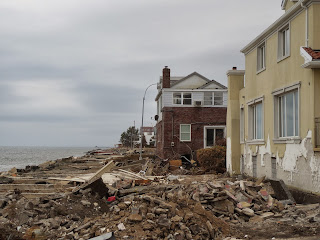 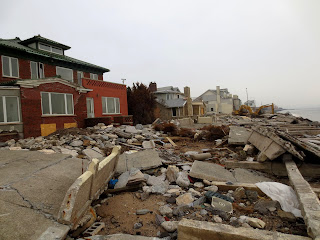 The Metropolitan Transportation Authority said that the destruction caused by the storm was the worst disaster in the 108-year history of the New York City subway system.
Nine of the city's 14 underwater tunnels were damaged by flooding, and necessary repairs could force closures for years to come. The worst hit tunnels, on the R and G lines, are still  under repair. Other tunnels, particularly in lower Manhattan, will also face shutdowns in the future to fix salt water contamination and corroded equipment.
It was clear for years that the New York City subways were dangerously vulnerable to hurricane flooding.  Waterproofing was never undertaken.
Since Hurricane Sandy hit, the MTA has been studying how other cities, like Copenhagen, Tokyo, and Hong Kong, protect their subway systems from flooding.  Solutions could include flood gates, slate-and-frame removable barriers, and water-tight flood doors at subway entrances.
The temporary weekday ferry service between the Rockaway and Lower Manhattan was open with a stop in Sunset Park to help commuters. The service  will continue to operate through January 31, 2014. Free parking is available on the ferry pier at Brooklyn Army Terminal, located at 58th Street and 1st Avenue and the price is $2.
There will be no charge for two subway lines( A and R trains)  on Sandy anniversary  on Tuesday, October 29. 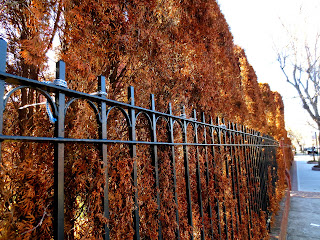 The devastation and damage from Hurricane Sandy was not limited to homes ,properties  and transportation systems. Many trees (especially pines and sycamores )   were damaged due to salt water in the air being blown far inland.  The city lost 20,000 trees to Sandy. When plant roots absorb the chloride in salt, the damage is transported to the leaves, where it accumulates in toxic levels. Plants that suffer saltwater inundation basically die of dehydration as the salt in the soil absorbs all moisture. 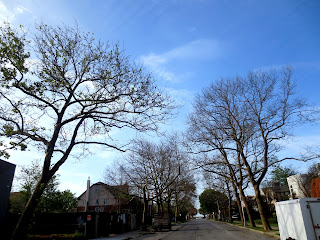 The city recently announced it will cut down 2,000 damaged trees this fall to prevent possible future incidents in the areas affected worst by Sandy, including Staten Island, Coney Island, Rockaway, Red Hook, and lower Manhattan.

On October 29, 2013  the Museum of the City of New York will open a major photography exhibition featuring images taken by both professionals and everyday New Yorkers who captured the moments   during the storm and its aftermath.  The exhibition, Rising Waters: Photographs from Hurricane Sandy draws on work submitted by over  a thousand  photographers, many of whom were personally and profoundly impacted by the storm.


I live less a mile from the beach. We had a basement full of water and more than one feet of the salty dirty water in the first floor.  Our car was damaged by Sandy( total loss )  among  the quarter of a million new and used cars and trucks.   Fortunately I was not in the city that week.  I did not send my pictures anywhere , I just publish  some of them now.