One Times Square or just Times Tower    stands on an isolated triangle of land at Broadway, Seventh Avenue, and 42nd Street.  The building was completed in 1904 to serve as the new headquarters of The New York Times.

The Pubst hotel, built just 5 years before on the same lot, was demolished to give way to the new development.  Before Times Tower was built,  the  square was named   Longacre Square after Long Acre in London.  At the end of the nineteenth century the area was the   center of New York's carriage industry, and  Long Acre in London  was where the carriage trade in that city was centered. 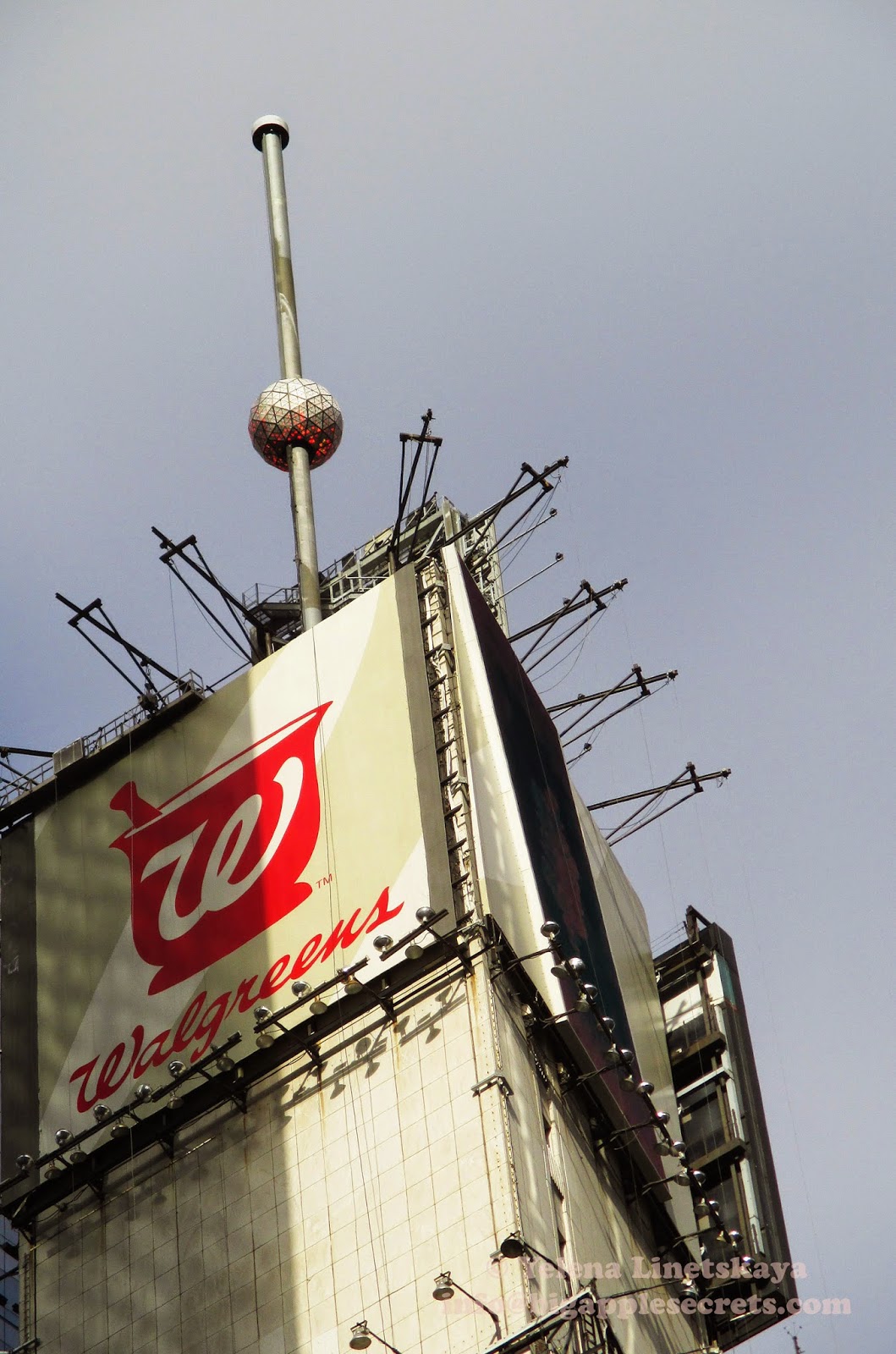 The New York Times officially moved into the building in January 1905. The paper's owner, Adolph Ochs,  successfully persuaded the city to rename the surrounding area  after the newspaper, becoming Times Square.  At that time the tower was  the second tallest skyscraper in Manhattan.


To celebrate the 1904 New Year Ochs threw a lavish New Year’s celebration that was to be “the talk of the town.  The party was successful , but  shooting fireworks off the building ended   two years later when the city banned them. Times  had to   find a different symbol for starting the New Year.   In 1907 the first New Year's Eve Ball dropped  from the flagpole atop One Times Square.


Six years after the first Ball drop, The New York Times moved to a new building. One Times Square is now totally empty except for a Walgreen's, offices for a New Year's planning company, and the Ball on its roof.

The first "time-ball" was installed atop England's Royal Observatory at Greenwich in 1833. This ball would drop at one o'clock every afternoon, allowing the captains of nearby ships to precisely set their chronometers. In 1845 a  time ball was installed atop  the U.S. Naval Observatory in Washington, DC . In cities, people set their personal clocks to the time balls.
In 1884, someone even proposed erecting a time ball on top of the Washington Monument.

The Ball on the Times Square has been lowered every year since 1907, with the exceptions of 1942 and 1943 because of the war time when the lights were dimmed in New York.

The first New Year's Eve Ball was made of iron and wood, and had    one hundred 25-watt light bulbs. The ball  was 5 feet in diameter and weighed 700 pounds.  In 1920, a 400 pound Ball made entirely of wrought iron replaced the original. In 1955, the iron Ball was replaced with an aluminum Ball weighing a mere 150 pounds. This aluminum Ball remained unchanged until the 1980s, when red light bulbs and the addition of a green stem converted the Ball into an apple for the "I Love New York" marketing campaign from 1981 until 1988.

﻿
After seven years, the traditional glowing white Ball with white light bulbs and without the green stem returned to brightly light the sky above Times Square. In 1995, the Ball was upgraded with aluminum skin, rhinestones, strobes, and computer controls, but the aluminum Ball was lowered for the last time in 1998.
The fourth ball with    over 600 halogen bulbs and 504 triangle-shaped crystal panels  was constructed at Waterford's factory in Ireland, and was then shipped to New York City, where the lighting system and motorized mirrors were installed.


In 2007, for the 100th anniversary of the Times Square Ball Drop tradition, Waterford Crystal and Philips Lighting crafted a spectacular new LED crystal Ball - the Ball N5.
There was  an  excellent Visitors Center on  Times Square, now unfortunately permanently closed . The 2008    New Year's Eve ball was on display. The ball changed color and did  a faux-countdown every now and then.  I was in this center several times and made a short movie with the ball.

At midnight on New Year's Eve, as the Ball Drop signals the start to 2015, 3,000 pounds of confetti will flutter down on revelers in Times Square. The confetti will be covered in wishes,   collected and displayed at the   Mobile Wishing Wall set to be presented throughout Times Square during the month of December.