The oldest private club in New York and Knickerbockers

In 1809, legendary author Washington Irving solidified the knickerbocker name in New York lore when he wrote the satiric "A History of New York from the Beginning of the World to the End of the Dutch Dynasty"  under the pseudonym Diedrich  Knickerbocker.  In this book an eccentric 25-year-old scholar, Knickerbocker relates this comic history of Dutch settlers in the Americ an colony of New Amsterdam, satirizing Dutch-American mannerisms and retelling Dutch legends. 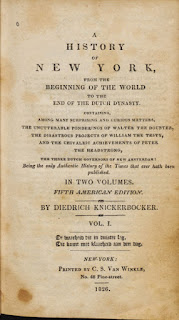 Later he wrote: "When I find after a lapse of nearly forty years the haphazard production of my youth still cherished among  New Yorkers- when I find its' very name become a ' household word' and used to give the home stamp to everything recommended for popular acceptance such  as Knickerbocker societies, Knickerbocker  insurance company, Knickerbocker  steamboat ,(...) and when I find  New Yorkers of Dutch descent priding themselves upon being 'genuine   Knickerbocker  ' - please myself with the persuasion that I have struck the right chord."

If he write this comment twenty years later he could add a   Knickerbocker Club to this list. This club is not the oldest club in New York- it just derived from the oldest one- TheUnion Club.


The Union Club is the oldest private club in New York City and the third oldest in the United States. Modern private social clubs   trace their origins back to the coffeehouses of 17th-century London. Coffee was introduced to London society in 1652 and   coffeehouses became the place to meet and discuss current events.   Clubs took over the role occupied by coffee houses in 18th century London to some degree, and reached the height of their influence in the late 19th century.

I published several posts about New York  clubs - The Racquet and Tennis Club, private club with nude swimming tradition, the Colony Club-the only club, created only for women, Friars Club with their legendary “roasts” in which comedians pepper a celebrity with good-natured insults and other clubs.
New York Times wrote:   A young man of Manhattan felt his life was meaningless, if not actually broken, if he did not “have” a club—the expression “make” a club was always frowned upon—and such a young man, looking forward to being had, cheerfully sat out club waiting lists, in some cases ten years long.

In the summer of 1836, a number of leading New Yorkers, including ex-mayor Philip Hone, invited two hundred and fifty "gentlemen of social distinction" to join the new Union Club. As Hone noted in his diary, the club would "be similar in its plan and regulations to the great clubs of London, which give a tone and character to the society of the London metropolis." After offering admission to the initial cohort of 250, the club's membership would then be expanded to 400—large enough to accommodate enough socially distinct gentlemen while still remaining exclusive. 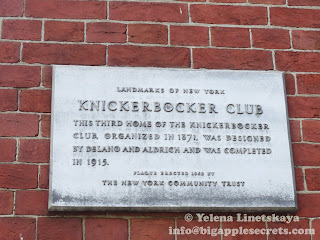 For a century no lady ever saw the inside of the club unless she were either a female employee or the wife of the club president.  The wife of the club president  was permitted to visit the club once, on some morning when the club was empty, for the sole purpose of seeing her husband’s portrait and where it was hung.
From the beginning, the Union Club was known for its strongly conservative principles. In fact, even during the Civil War, the Union refused to expel its Confederate members. This policy, and a belief that The Union's admission standards had fallen, led some members of the Union to leave and form other private clubs.

One of such clubs was  Knickerbocker Club.    Knickerbocker Club was founded  in  1871 by 18 former members of  Union Club,   who did not like  Union club   expansion of the membership. Among the  Knickerbocker Club  founders were such prestigious New Yorkers as Alexander Hamilton and John Jacob Astor.   Club had an excellent restaurant. The  typical dinner menu from  1887 included: East river oysters,  Creme de petit pois aux croutons, Terrapins a la Knickerbocker, Saddle of mutton,  String beans, potatoes hashed and fried,  Canvasback ducks, Mousse café,  Cheese, fruit, café, nuts.


The men-only club does  not  have  website. Their single Yelp review did say:  " Truly one of the finest private men's clubs in America. We had a lovely dinner with friends there-it is reciprocal with a club I belong to. Highly recommended, if you get an invitation."
More than two hundred years after   the  debut  of the book  of Washington Irving  ,  Knickerbocker's name has graced New York residents, beer brands, streets, neighborhoods.   New York has a lot of  places that have  the name Knickerbocker.  If you cannot be the member of a  The Knickerbockers Club  you can stay in the Knickerbocker Hotel  and  have a lunch  at  Knickerbocker Bar & Grill.
Posted by Секреты Большого Яблока