More than 100 years ago press agents met once a week at Browne’s Chophouse, in Manhattan to talk about their problems.  Later   the actors and musicians started to join them. 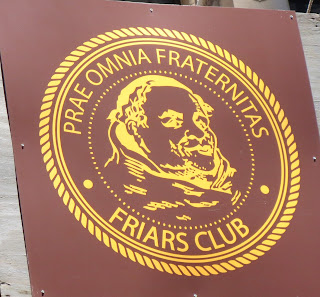 “The group realized they needed a broader name to incorporate the ever-diversifying membership. The term Friars stems from the Latin “frater” meaning brother – the perfect name for a fraternal organization whose motto would soon become Prae Omnia Fraternitas (brotherhood forever in Latin).”
The club made a name for itself being as vulgar and unorthodox as any group can be.  At the same time the members of the club  call their club house Monastery and add monastic labels to its officers: the Abbot is the head of the organization, the Dean is president.
Their first club Monastery was on 107 West 45 street in the St James hotel.  The first Friars Frolic  ( as the club members named fundraiser event) was inaugurated in 1911, for which Irving Berlin wrote Alexander’s Ragtime Band. Frolics were successful, the number of the members was enlarging  and the Club purchased three lots on  West 48th Street and built it’s own house in 1916.
This new Monastery had  suites for sleeping, a ballroom, dining room, poolroom, a gym, bars, and meeting rooms.  After the Great Depression the Friars lost their beloved building. During next 20 years the club had been hopping from one hotel to another. But the club survived and moved to their current  Monastery on 55th in 1957.
This German Renaissance townhouse was constructed in 1909 as the private house for investment banker Martin Erdmann. In 1910, he lived here on his own income, with no family members, but with eight servants. Erdmann himself was born in New York, but his father was from Germany.  This is the only remaining house on what was once a residential block. The original deed of the house restricted the building’s usage from any noisy or smelly activities. 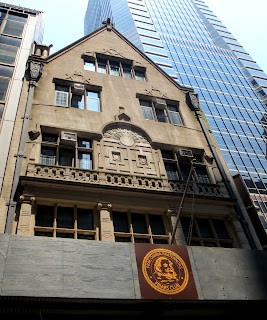 The Friars Club   on 55th Street hosts about 175 events a year, including stand-up comedy shows, concerts and a film festival. The restaurant is open six days a week.  The club  has it’s club's legendary “roasts” in which comedians pepper a celebrity with good-natured insults.

In 1949 with Maurice Chevalier, a French actor  and singer, as the guest of honor, the club members  held their first “Roast.”

Lisa Lampanelli,  an Italian-American stand-up comedian, said: “A Friars Club roast is a great place to bring a drunken sailor who wants to learn some new words.”
The Friars Club started out as an all-male Club.  In  1988 the Friars welcomed women, and   Liza Minnelli  became the first official card-carrying female member. The list of celebrities- the members of the club -  is really long and includes Irving Berlin, Frank Sinatra, Elizabeth Taylor, Kirk Douglas, Barbra Streisand, Barbara Walters, Whoopi Goldberg, Donald Trump, John Travolta.
Club bylaws say a maximum of 30 percent of club members may come from outside entertainment . The club charges are correlated to the  member’s age: members under 40 pay half the cost of the initiation fee and annual dues, and those under 30 pay quarter of those charges. Admittance requires recommendation by two club members . 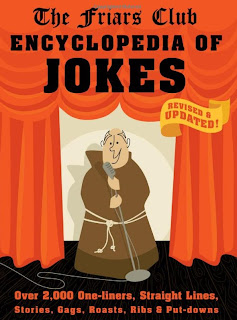 New York Friars club celebrated its 100th birthday in 2006. At the celebration event Freddie Roman, the club's dean for the past 35 years, said: “We have some of the funniest people in the world here today. Our history is the history of show business. We survived vaudeville, burlesque, eight-track tapes, Chevy Chase's talk show and Mayor Bloomberg's smoking ban".
The club had recently opened an earlier “time capsule” buried a hundred years prior. The capsule had clippings from local newspapers like the World, The Telegram, The Times, The American, The Sun, The Herald, The Journal and the Tribune.

In the new capsule each Friar was offered a page in the new container Gregory Alexson was one such Friar and he told the story.

The Friars Foundation, established in 1977 , has raised over $5 million dollars to  help prepare the next generation of performers and musical artists through scholarship programs for students studying the performing arts.
Every year the Sunshine Committee during the holidays invites 1,500 underprivileged children to a movie screening at a mid-Manhattan theater. After the movie each child receives a “goody bag” filled with toys, hats, scarves, books and a variety of other items guaranteed to make their holidays brighter. 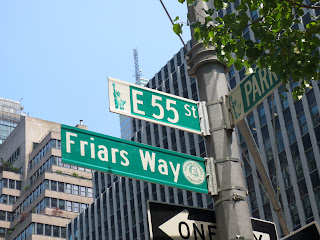 In 2004 the City of New York named the South East Corner of 55th Street “Friars Way.”

There is a joke of the day published on the Friar’s page. You can subscribe to Webmonk to have the joke delivered to you every day.