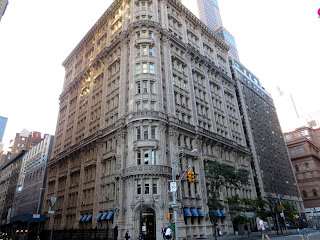 Façade of the residential building Alwyn Court, built in the beginning of the XX century and located at 58th Street and Seventh Avenue, is considered the most ornate in the entire New York. The architects of this building were inspired by the style of Francois I, King of France in 16 century. The style  combines Renaissance and Gothic ornamental forms. Every inch of the building is covered with  shapes and figures such as urns, flowers and leaves, animals, grotesque human faces and cherubs, fabricated by the Atlantic Terracotta Company of Staten Island. 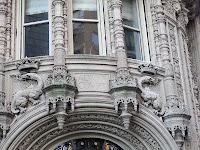 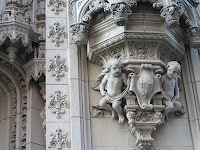 Terra cotta, meaning “cooked earth” in Italian, is a “high-heat-fired”, porous natural clay that can be molded into anything from construction material to ornamental structures. Terra cotta was introduced in the United States by immigrant artisans from England in the mid-19th century. At the beginning of the XX century Atlantic Terracotta was the largest producer of architectural terra cotta in the world.


Steel-framed skyscrapers needed decorative, inexpensive and lightweight fire-resistant materials for decoration and protection from the elements. There were two plants in Staten Island, New York. Atlantic Terra Cotta manufactured products for forty percent of the terra cotta buildings in New York City. The company was created in 1846 in Perth Amboy, Staten Island, due to rich supplies of clay. 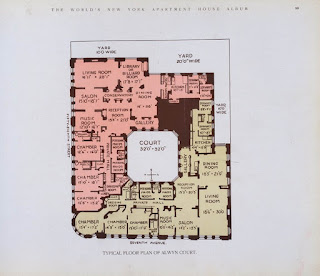 The architects took advantage of the economy of terra cotta, since a single mold could be used many times to create a shape. Terra cotta had become popular with architects at the turn of the century because of its versatility and affordability.

The building opened in 1909. There were  12 floors  with only two apartments on each floor and a square courtyard in the middle.   Every apartment had fourteen rooms and five baths. Each unit had its own living room, library and music rooms and wine cellar. 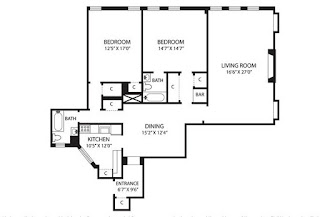 Just a year after the building was built there was a fire that destroyed several apartments. The damage was quickly repaired and within a year the Alwyn Court was at full occupancy. But the prosperity did not last long. Great Depression hit hard and by 1937 the Alwyn Court sat empty. After the foreclosure apartments were reconstructed and became smaller, the number of apartments was tripled, but the remarkable terra cotta façade was left intact. In April 2013 two-bedroom apartment was sold for 1.5 million. And you have to be ready to pay $2000 per month for maintenance. 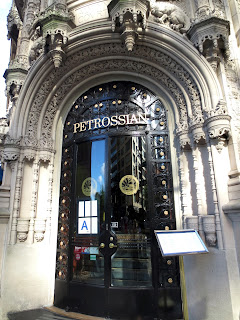 The premier location and opulent decorations attracted upscale restaurant “Petrossian” that was open in  1984 on the first floor of the building. The restaurant sits the next door to food boutique, with caviar, smoked salmon, foie gras, tea, preserves, and pastries.

Armenian brothers, Melkoum and Mouchegh Petrossian, émigrés from Russia, had opened their Paris shop in the early 1920's to introduce the pleasures of caviar to a willing world. 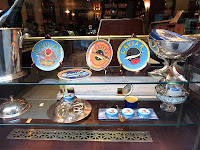 
Petrossian now buys its caviar from the US and other farms in Israel, Europe, and China, and maintains its reputation for excellence. “If our American ossetra is put next to wild ossetra, I dare anyone to tell me the difference,” says Alexandre Petrossian,  the third generation of the Armenian family.

Residents of the Alwyn Court were evacuated in March this year. Extell company had to restore the crane on the newly constructed One57 that crashed during the storm Sandy- I published a post about One57 several weeks ago. Michael Gross, chronicler of high-end real estate, author of 740 Park and resident of Alwyn Court said  to Observer:   “Frankly, I was not worried about the apartment so much as the corruption of the city and the unfairness of all this. Cranes go up and down in the city all the time and no one gets evacuated”