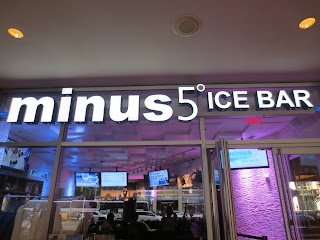 The city’s first ice bar is now open at the New York Hilton Midtown on Sixth Avenue,  just north of Times Square.  The  bar  is small- about 1,200 square feet and can accommodate about 30 people.
The temperature inside is 23 degrees Fahrenheit. Translated into Celsius scale it is “Minus 5”. Everything is made of ice- the walls, the chairs, the glasses. 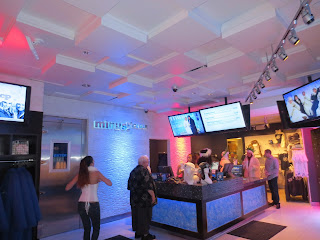 The $20 admission includes gloves and a parka. Or for an extra $75 visitors get the VIP package, which combines a faux fur coat plus hat, cocktail and a souvenir photo.  Be aware- pictures are not allowed, and it is not written anywhere.

There is a girl with a camera inside  and   you have to pay $20  for one picture, or 3 for $40. You also can not use your cell phone-  all electronic devices have to  be deposited in temperature-proof lockers at the door - any device that could melt the Arctic freeze  is not allowed in "Minus 5". 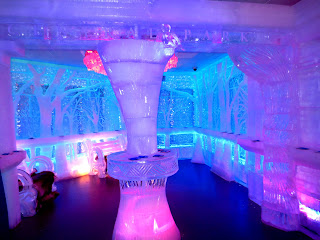 Bar is open daily from 2 p.m. Before  7p.m  children and families are welcome. When I was there on Thursday night there was already a line at 5:15 PM.
"We put a couple of million dollars into some serious computerized refrigeration equipment that really take into effect ambient heat, body heat, humidity, summertime, wintertime, volume of people coming in and out. It's a science to keep this whole environment, no window, humidity at the right temperature,” said NoelBowman, President of Minus5 Management Company. 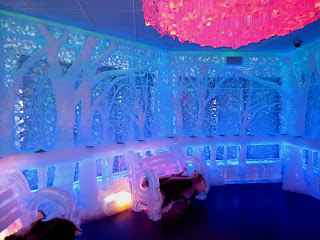 The first Ice Bar was established at the Ice Hotel in Jukkasjärvi , about 17 km from Kiruna, Sweden. Each year, the Ice Hotel melts by April and a new one is constructed in the fall.

In spring 1990, French artist Jannot Derid held an exhibition of ice art  in a cylinder-shaped igloo in the area. One night there were no rooms available in the town, so some of the visitors asked for permission to spend the night in the exhibition hall. They slept in sleeping bags on top of reindeer skin – the first guests of the "hotel."
Each spring,   Icehotel  harvests tons of ice from the frozen river  and stores it in a nearby production hall. The ice is used for creating Icebar designs and ice glasses, for ice sculpting classes, events and product launches all over the world.  About 1,000 tons of what is left is used in the construction of the next Ice Hotel.   The developer of the Icehotel had an idea of opening a permanent, year-round ice bar in Stockholm.
Since then, the franchise has spread and there are now ice bars in London, Tokyo, Copenhagen, Barcelona, Amsterdam, Orlando, Seoul, Dubai, and most recently Shanghai, China. 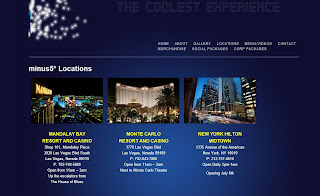 "Minus 5" Ice Bar was  created in New Zealand by Craig Ling, who opened the original ice bar in Auckland, New Zealand. There are "Minus 5"  bars in Australia and  Portugal. The bar in Manhattan is the third one in USA- two other bars are in Las Vegas at Mandalay Place and at Monte Carlo Casino.
Ling is now a partner in the New York venture.      Promoters  of the “Minus 5” say that everything  is  carved out of “100 percent Canadian ice.” The truth is, it’s special, extra-clear “carvers” ice — some from Canada, the rest from Philadelphia, Las Vegas and Minneapolis.  About 350 blocks of it, each weighing up to 100 pounds, was used to create the cool surroundings.
The initial investment for a Minus5 Ice Bar franchise is between $1.5 million and $2.38 million, which includes a $90,000 franchise fee.