The famous publisher William Hearst, “The greenest” skyscraper and castle in California. Part 2 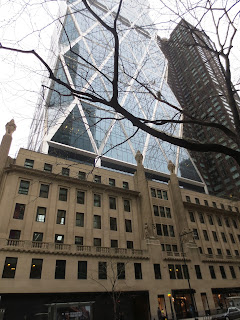 Hearst Corporation is one of the largest diversified media companies in the world. The corporation now includes about 200 separate businesses. Each day, nearly 20,000 people are at work at Hearst.

The founder of the corporation is William Randolph Hearst. He built the nation’s largest newspaper chain, his methods deeply influenced American journalism. He was a multi-millionaire  and a son  of a millionaire. A new building for Hearst corporation was built  in 2008 on the top of the old one,build on 1928. It is located near Columbus circle  and Central Park . 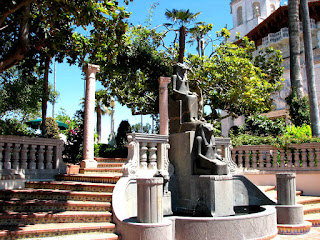 Hearst mother  left  him the family’s fortune, which included a 168,000-acre ranch in San Simeon, California half way between Los Angeles and  San Francisco.  Hearst spent his child years there and loved the place and built a castle on the lot of more than 15 square miles.


His  original idea was to build a bungalow, according to a draftsman who recounted Hearst's words from the initial meeting: I would like to build something upon the hill at San Simeon. I get tired of going up there and camping in tents. I'm getting a little too old for that. 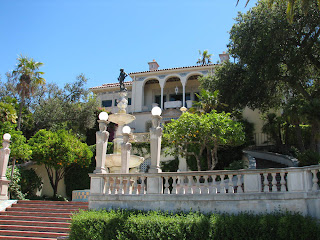 Construction started in 1919 and continued through 1947. There are 56 bedrooms, 61 bathrooms and  19 sitting rooms, indoor and outdoor swimming pools, tennis courts, a movie theater, an airfield, and the world's largest private zoo in the castle - so it is not a bungalow at all!


The castle was designed by architect Julia Morgan - the first female graduate of the prestigious  "Ecole Des Beaux Arts"  in Paris. She was the first woman architect licensed in California. She started on the castle in 1919 and ended only by Hearst's declining health in 1947.   During her 45-year career, she designed more than 700 homes, churches, office buildings, hospitals, stores, and educational buildings. Julia wrote: ”Never turn down a job because you think it’s too small;  you don’t know where it can lead.” 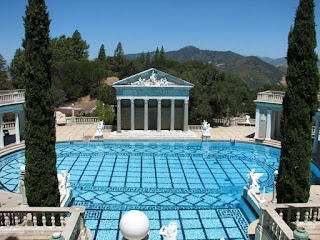 One of the highlight of the estate is the outdoor Neptune Pool, located near the edge of the hilltop. The Neptune Pool patio has an ancient Roman temple front ( not a copy!) , transported from Europe and reconstructed at the site.  The pool the holds 345,000 gallons of water and includes the oil burning heating system.

A tiled indoor Roman pool is styled after an ancient Roman bath. Hearst was affected by the beauty of the mosaics in the 5th Century Mausoleum in Ravenna, Italy and implemented  similar styles into his pool. Eight marble statues, decorating the pool, were carved starting in 1930 by Italian Sculptor  and are the  copies of ancient Greek and Roman statues. Hearst spent millions of dollars expanding the property, building a Baroque-style castle, filling it with European artwork, and surrounding it with exotic animals and plants.


The Hollywood and political elite often visited the castle. There is a small private  airport   at the bottom of the hill. Guests also could take a private Hearst-owned train car from Los Angeles.  Charlie Chaplin, Cary Grant, the Marx Brothers, Charles Lindbergh, Clark Gable, Franklin Roosevelt and Winston Churchill were among Hearst's guests.

In 1957, the Hearst Corporation donated the property to the state of California. Hearst Castle became a United States National Historic Landmark on May 11, 1976.  The site attracts about one million visitors per year and you can become one of them.  I was there several years ago. Believe me - it’s amazing!

When Randolph Hearst left his castle for health reasons, he moved into this Beverly Hills mansion that girlfriend Marion Davies purchased for him in 1946.  The house has 29 bedrooms, three swimming pools, tennis courts, its own cinema and a nightclub. Hearst  spent there the last twenty years of his life. John and Jacqueline Kennedy stayed in this house for their honeymoon.

According to the LA Times, the Beverly House’s 4th and current owner, attorney-investor Leonard M. Ross, purchased the mansion over 30 years ago. Unfortunately, it appears Mr. Ross has run into recent financial difficulty and he filed for bankruptcy on May 2013.   Estate is  on the market for  $117.5 million. Anyone interested?