'21' is one of America’s most famous speakeasies from the Prohibition Era.  Every President since Franklin Delano Roosevelt except for George W. Bush has dined at 21. JFK dined at '21' on the eve of his inauguration.
The most famous feature of 21 is the line of 33 painted cast iron lawn jockey statues which adorns the balcony above the entrance. 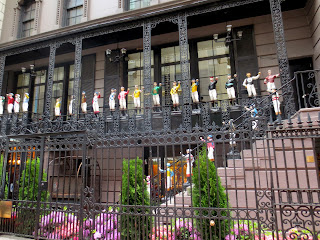 Club was once home to wealthy horse owners and breeders of New York City. They donated jockeys with the colors of their private horse stables. The most recent from Sackatoga Stables represents  the great NY horse, Funny Cide, winner of 2003 s Kentucky Derby and Preakness races.
The first version of the club opened in Greenwich Village in 1922. The club was opened by two cousins   Jack Kriendler and Charlie Berns to earn night school tuition.  In 1926 the location was moved  to  88 Washington Place  and in a year  it moved uptown to 42 West 49th Street.  The wrought-iron gate  that you can see now outside the club   dates back to that time – they were initially installed on  42 West 49th Street. 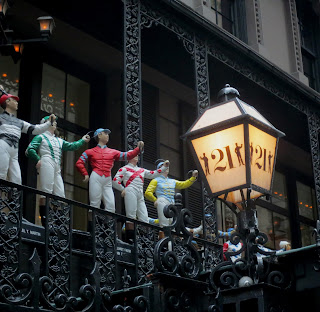 In 1929, to make way for the construction of Rockefeller Center, the club moved to its current location.   The bar  included a secret wine cellar, which was accessed through a hidden door in a brick wall which opened into the basement of the building next door (number 19).
The wine cellar housed 2,000 cases of wine, including the private collections of Presidents Gerald Ford and Richard Nixon, Elizabeth Taylor, Sophia Loren, Mae West, Eva Gabor and Aristotle Onassis.
At the beginning of the  Prohibition era  the owners   hired architect Frank Buchanan to install a complex system to hide and destroy liquor in case of future raids. As soon as a raid began, a system of levers was used to tip the shelves of the bar, sweeping the liquor bottles through a chute and into the city's sewers.
During Prohibition, New York City Mayor Jimmy Walker had a private booth in a corner of the cellar, where he would go to have a cocktail in peace as the feds were raiding the premises above for contraband.  In 1997  the famous Wine Cellar was  remodeled and become  one of the most sought-after private dining rooms in the city. Patrons enter through the now famous brick wall "door" that the Feds never found.
Salvador Dali and Alfred Hitchcock were  the frequent visitors of the Bar. They  collaborated during the making of the psychological mystery thriller  “Spellbound”.   During the Wall street boom , in 1980s '21' spawns the power lunch.  Forbes says "more deals are done at '21' than on the stock market floor.
At Christmas time the patrons received silk scarves decorated with a motif of various unique club insignia. Each scarf is numbered and has the Jockey logo.

You can use an interactive map on the restaurant’s web site to find out where our celebrity regulars like to sit. 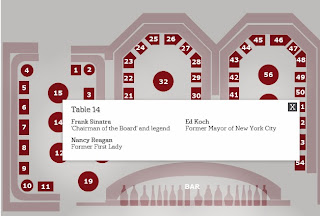 On the Winter Restaurant Week  February 17th through March 7th (Monday-Friday)  you can have three-course lunch for $25 or    three-course dinner  for $38.  Beverages, tax and gratuity are additional.

If you book a dinner reservation you can park  you car for  6 hours   for $10 at Central Parking Garage, located in the CBS Building on 31 West 52nd Street
Posted by Секреты Большого Яблока