Wallenberg -the hero of the Holocaust, who save tens of thousands of Jews.

On a small triangle   on First  Avenue  across the street from   the United Nations Building in Manhattan, there is a memorial to Swedish Diplomat Raoul Wallenberg who saved the lives of  thousands of Hungarian Jews during the Holocaust. 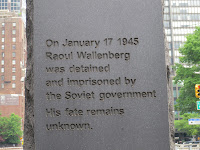 The memorial was created by Swedish artist Gustav Kraitz who named it "Hope". It was dedicated on November 9, 1998. Kraitz’s piece, is comprised of a replica of Wallenberg’s briefcase, a sphere, five pillars of hewn black granite, and stones which once paved the streets of the Jewish ghetto in Budapest. The stones were a gift from the city of Budapest. 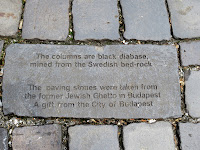 Raoul Gustav Wallenberg  was born in 1912  in one of Sweden’s wealthiest and most prominent families. He was fluent in English, French, German, and Russian.  Wallenberg's paternal grandfather sent him to study in Paris. He spent one year there, and then, in 1931, he studied at the University of Michigan in the United States.  He graduated from university in 1935 and , after 6 months   in South Africa  and 6 months  in   Haifa returned to Sweden  to help his  uncle   Jacob Wallenberg at the export-import company owns by a Hungarian Jew Kálmán Lauer. 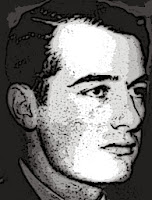 In June 1944, the War Refugee Board ,   established  by United States, appointed Raoul Wallenberg first secretary at the Swedish legation in Budapest.

At the beginning of 1944, there were   700,000 Jews in Hungary.  By the time of Wallenberg's arrival there were only 230,000 Jews remaining in Hungary.  Together with fellow Swedish diplomat Per Anger he made fake  "protective passports" which identified the bearers as Swedish subjects awaiting repatriation and thus prevented their deportation. These documents looked official and were generally accepted by German.

With the money raised by the board, Wallenberg rented 32 buildings in Budapest and declared them to be extraterritorial, protected by diplomatic immunity. He put up signs such as "The Swedish Library" and "The Swedish Research Institute" on their doors and hung oversize Swedish flags on the front of the buildings to bolster the deception. The buildings eventually housed almost 10,000 people. Wallenberg started sleeping in a different house each night, to guard against being captured or killed by Nazi.
On October 29, 1944   the 2nd Ukrainian Front under Marshal Rodion Malinovsky launched an offensive In   late December 1944  the city had been successfully encircled  by the 2nd Ukrainian Front under Marshal Rodion Malinovsky.  On January 17, 1945, Wallenberg was called to General Malinovsky's headquarters in Debrecen to answer allegations that he was engaged in espionage.

Wallenberg was transported by train through Romania, to Moscow,  transferred to Lubyanka prison and held in cell 123 with fellow prisoner Gustav Richter.
On March 8, 1945, Soviet-controlled Hungarian radio announced that Wallenberg and his driver had been murdered on their way to Debrecen.
On February 6, 1957, the Soviet government released a document dated July 17, 1947, which stated   that “… the prisoner Wallenberg   died suddenly in his cell this night, probably as a result of a heart attack or heart failure”.

In 1991, Vyacheslav Nikonov was charged by the Russian government to investigate Wallenberg's fate. He concluded that Wallenberg died in 1947, executed while a prisoner in Lubyanka.
In 2000, Russian prosecutor Vladimir Ustinov signed a verdict posthumously rehabilitating Wallenberg  as " a victim of political repression".
A number of files pertinent to Wallenberg were turned over to the chief rabbi of Russia by the Russian government in September 2007 . The items were slated to be housed at the Jewish Museum and Tolerance Center in Moscow  which opened in 2012.


The US Congress made Wallenberg an Honorary Citizen of the United States in 1981, the second person to be so honored, after Winston Churchill. Wallenberg was made the first Honorary Citizen of Canada in 1985 and in 2013  in Australia.
There are many   memorials in honor of Wallenberg in different cities all over the world: in London and  Buenos Aires( the copy of London memorial), Stockholm and Budapest. Wallenberg was named. Five streets in Israel are  named after him. There is a School in Brooklyn , P.S 194 named after Wallenberg.