New York city was bustling 100 ago. On the streets were automobiles, the Woolworth Building had just been completed and electric trains pulled out of Grand Central Station for the first time. 101 years ago "The Armory Art Show" shocked Americans.
That show introduced American audiences to Cubism and other avant-garde forms of European art. The three-city exhibition started in New York City's 69th Regiment Armory, on Lexington Avenue between 25th and 26th Streets, from February 17 until March 15, 1913.
Later the exhibition  went on show at the Art Institute of Chicago and then to The Copley Society of Art in Boston.

In the eighteenth and nineteenth centuries, artists were trained at art academies. For centuries, the artist’s training had been in the study of the nude figure, in drawing and painting from careful observation of the model, and in the copying of works of the old masters. In America at the turn of the century, academic styles and modes of exhibition were still very strong.


The idea of the Armory Show dates back to 1911 when four young American artists met at the Madison Gallery in Manhattan.  This group later would become the Association of American Painters and Sculptors, who assembled the show from European works gathered abroad and American works curated at home. The space at the  69th Regiment Armory building was rented for a fee of $5,000, plus an additional $500 for additional personnel. The organizers used screens covered in fireproof burlap to divide  the floor into eighteen octagonal rooms and created a  maze inside a huge  hall. 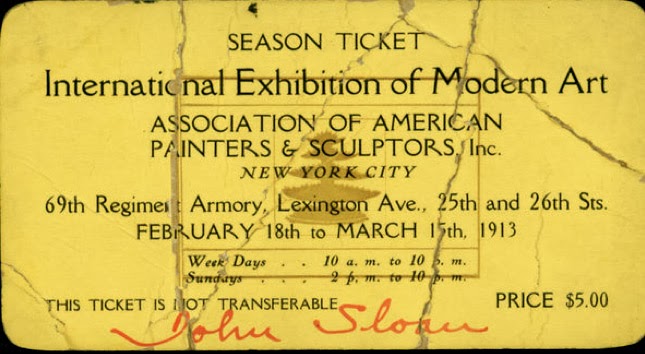 
Among those artists whose work was seen in the US for the first time were Wassily Kandinsky, Pablo Picasso and Marcel Duchamp.Rich collectors and dealers had seen such art in Europe, but this was the first time the masses got to see — and react to — the new ideas.
The main European movements were covered- Impressionism, Post-Impressionism, Cubism, Fauvism, and Symbolism.

Four thousand guests visited the rooms on the opening night.
Nearly   90,000  New Yorkers packed into the 69th Regiment Armory to see the future of the art. It was the biggest art show New York had ever seen.

The Cubist room attracted the most visitors and was dubbed the “chamber of horrors,” , according to written accounts of the time.  If you'd like to know  more about the 1913 show or would like to find where you can see the  pictures from the show now- wait for my next post to come!