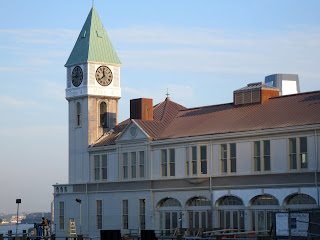 The last surviving historic pier in the city - City Pier A is a municipal pier in the Hudson River at Battery Park near the southern end of Manhattan.    Pier A was built from 1884 to 1886 to serve the New York City Department of Docks and Harbor Police. The pier was expanded in 1900 and again in 1919 with a clock installed in the pier's tower as a memorial to 116,000 US servicemen who died during World War I. The clock is a ship's clock and was donated by Daniel G. Reid, founder of United States Steel Corporation. 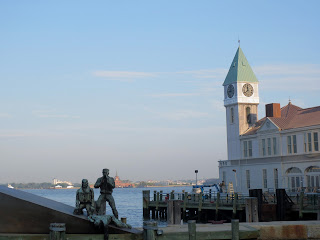 The pier’s three-level, 38,000-square-foot Beaux-Arts building originally housed the city’s docks department and later served as a place to greet arriving dignitaries, like King George VI during the 1939 World’s Fair, according to historical accounts. Later it served as a command post for the city’s fire boats.
The New York City Fire Department used the pier from 1960 to 1992 as a fireboat station. The clock-topped building has mostly sat vacant for decades.

During Sandy the pier building wound up with 5 feet of water flowing through it, damaging the floors, doors, walls and wiring, and resulting in a $2.5 million insurance payout.  In December 2013 the city agreed to add $5 million to build a new plaza outside Pier A.
In 1991, the American Merchant Mariners' Memorial was installed on a rebuilt stone breakwater just south of Pier A, connected to it by a dock. 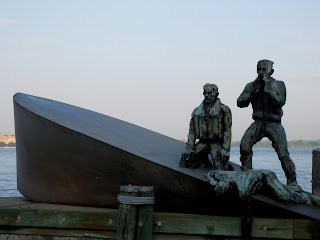 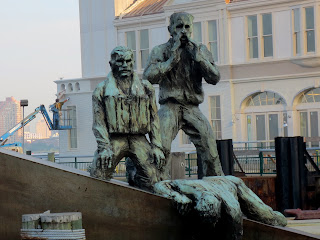 A group of Merchant Marine veterans initiated the effort for a Memorial in 1976. The competition for the Memorial’s design attracted more than 200 entries, with the committee finally selecting the artist Marisol’s design. The memorial was designed   based on a photograph from an actual event during WWII.
In that event a German submarine U-123 attacked and sank an   American oil tanker  SS Muskogee, owned by a Standard Oil Co of New Jersey on its way from Venezuela to Halifax.
On the afternoon of the March 22nd, about 450 miles north-northeast of Bermuda, German submarine U-123 fired a torpedo at Muskogee. It hit the engine room, causing the tanker to sink in  16 minutes. Ten men made it onto two life rafts and were photographed and questioned by the U-boat commander before leaving the area. They were never seen again all lost at sea in the vast Atlantic.
"Berliner Illustrierte Zeitung", issue number 27 -1942, a weekly published  full page of photos and captions depicting a burning U.S. oil tanker. The page contained two photos of a life raft carrying seven men, obviously American merchant seamen. Captain George Duffy, who was a prisoner aboard the German navy's supply ship, saw these pictures.  He tore the page out of the magazine, folded it, and secreted it away. 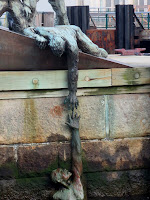 After the war, Duffy took this page to as many of the oil tanker companies as he could find in New York. No one could identify the seven men. From time to time he published it in books he had written. At Last  F.B.I.  enhanced the photo of the men and was able to read the ship's name stencilled on one of the life jackets, S.S. Muskogee.
At the unveiling of the Memorial on October 8, 1991, Captain Duffy was privileged to be the first individual to take his place on the base of the monument, standing next to the figure of the man with his hands cupped to his mouth.

Read more:
The Dreadful Saga of the MV American Leader and Her Crew
Battery Park Memorials