The 22-foot-high ornamental  Pulitzer Fountain sits in the middle of the Grand Army Plaza in Manhattan, near the south-east corner of the Central Park.  Behind it stands Bergdorf Goodman, one of  the most elegant department store in NYC, and in front of it- Plaza Hotel.


Joseph Pulitzer was the 19th-century Hungarian-American Jewish journalist and newspaper publisher whose will established the Pulitzer Prizes "for the encouragement of public service, public morals, American literature and the advancement of education."Pulitzer left $50,000 for the fountain, to be erected.   His instructions were to create “a fountain like those in the Place de la Concorde in Paris.”

Pulitzer probably got the idea to locate the fountain in Grand Army Plaza from Karl Bitter, the Austrian sculptor, who proposed a symmetrical plaza for this area. To make the plaza symmetrical, the Sherman monument was moved 16 feet west to its present location.

The bronze sculpture is of Pomona, the goddess of fruitful abundance in ancient Roman religion and myth   is on the top of fountain. Her name comes from the Latin word pomum, "fruit," specifically orchard fruit.  Ponoma is mostly nude, except for a cloth draped across one leg.
The fountain was finished in 1916 and at that time the Bergdorf Goodman  was not built yet- there was a grand Vanderbilt's mansion sitting on the corner of 5th Avenue,  so Mrs. Alice  Vanderbilt had an unobstructed view of the naked goddess from here bedroom. The legend told that Alice ordered to her  bedroom to be moved .

The Vanderbilt Mansion on 5th avenue was completed in 1882 and demolished in 1927 to make way for the upscale department store, Bergdorf Goodman.
Karl Bitter chose Audrey Munson   for the model of Ponoma. Audrey Marie Munson was born in 1891 in upstate New York.    After her parents divorced, Audrey  ( she was 15 at that time) moved to the city with her mother. Soon she was discovered by a photographer and became the most popular, in-demand artist’s model in the city.


Audrey posed for at least 15 statues in New York City alone, including "Civic Fame" atop the Municipal Building and the figure of Columbia on top of the Maine Memorial ( read about the  memorial in one of my posts) .  Andrew posed for the memorial sculpture in Straus Park at 107th Street and Broadway.  It honors Ida and Isador Straus who died on the Titanic in 1912. Isador Straus was the owner of Macy’s . I wrote about him in one of my posts.
There are two sculptures by Daniel Chester French in the Metropolitan Museum of Art for which Audrey Munson posed. These are "Memory" and "Mourning Victory from the Melvin Memorial".
By 1915, Audrey was so popular as a model that she was chosen to be the muse for almost all carvings at the Panama Pacific International Exhibition in San Francisco. Her face and body adorned virtually every building at the fair, and she became an overnight sensation.
Audrey  Munson was the first woman to ever appear nude in a film,  “Inspiration”.

When Audrey returned from Hollywood,  she found that  The Beaux-Arts construction boom was over  and she is forgotten. Andrew lived with her mother in a NYC boarding house where she had an affair with their married landlord. Landlord kill his wife to free himself  for Audrey.  Andrew was cleared and the landlord was convicted and sentenced to die in the electric chair, but he hung himself in his prison cell.
Audrey returned to the small town in upstate where she was born.  Feeling like an outcast, she attempted suicide, but failed. She was   confined to a the Saint Lawrence Psychiatric Center in Ogdensburg, New York and remained there for the rest of her life. In 1996, Audrey Munson died in that institution. She was 104 years old. 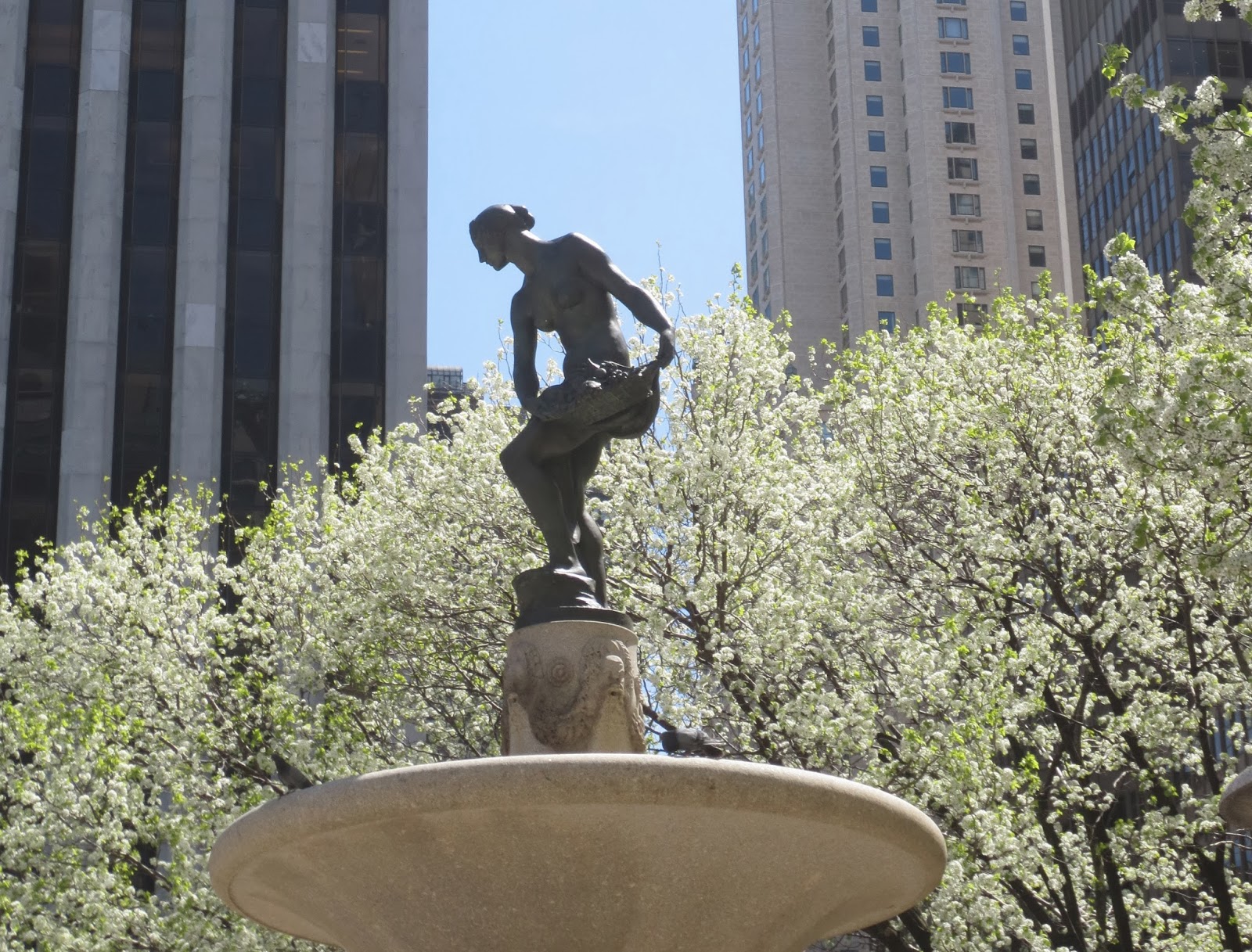