Peking was built   in Hamburg, Germany  in 1911  to transport nitrate from the west coast of South America to Europe. She was built for F. Laeisz, a German company that still exists.
The company was founded in 1824 by Ferdinand Laeisz as a hat manufacturing company. Ferdinand's son Carl Laeisz entered the business in 1852 and  turned the F. Laeisz company into a shipping business.
In 1857, they ordered a barque which they named Pudel (which was the nickname of Carl's wife Sophie followed her hairstyle), and from the mid-1880s on, all their ships had names starting with "P" and they became known as "the P-line".
Four of the Flying P-Liners still exist today:

The Padua is the only ship still active. She that was built in 1926  and  was surrendered to the USSR in 1946 as war reparation and renamed after the early 19th century Baltic German explorer in Russian service, Adam Johann Krusenstern (1770–1846).
The ship is used mainly for training purposes under Russian flag, with her home ports in Kaliningrad (formerly Königsberg) and Murmansk. After the Sedov, another former German ship, she is the largest traditional sailing vessel still in operation.

The Peking successfully navigated waters for years until trade through the Panama Canal put her out of business.  In 1932  she was sold to the Shaftesbury Homes and Arethusa Training Ship, nautical school for boys in England ,  for £ 6500,   rebuilt for £ 40.000, renamed   Arethusa and was used   as a stationary training ship.   She was repurposed during World War II to serve the Royal Navy. Finally, in 1975,the ship was    purchased by the late coffee and gold trader Jack Aron.   She was  towed by the Dutch seagoing tug Utrecht from Blackwall to New York, South Street Seaport Museum and renamed Peking.
The captain had a sitting room called a “saloon,” a spacious bedroom and a private bath. The first and second mates also had separate quarters. The crew of 21 to 30 seamen and ship boys shared accommodations and sleeping bunks in an area of the ship that is now an exhibition space. 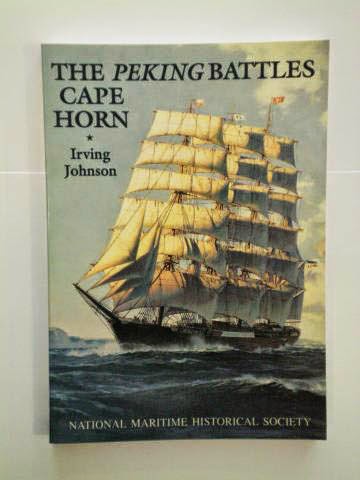 Captain Irving Johnson, American sail training pioneer and author,  went aboard  Peking as a young sailor in 1929. He  helped sail her around Cape Horn to Chile, and recorded the experience with still camera, movie camera, and the journal that became this book. This classic sea adventure was first published in 1932.  Cape Horn  was a major milestone on the clipper route, by which sailing ships carried trade around the world. The waters around the Cape are particularly hazardous, owing to strong winds, large waves, strong currents and icebergs.
I found   Irving Johnson’s classic video on Youtube of this trip. Amazingly he climbed right up into the top of the rigging to film the ship taking a pounding in 100 mile an hour winds rounding Cape Horn.  It was filmed onboard the Peking in 1929   and  then Irving Johnson’s  narrated the film in 1980.

The South Street Seaport Museum  has been trying to get rid of the Peking since at least 2008.  The Seaport collapsed financially in early 2011  and   was taken over by the Museum of the City of New York.    There was a rumor in 2013/2013  that Peking  was gifted to the city of Hamburg to lower the operating costs but her bad condition avoid her transportation to Germany.

I visited Peking this year in the second part of June during the "Nights at the museums"  event  when for the first time ever, Lower Manhattan   turned 13 of the city's museums into a summer cultural destination. All participating museums and historic sites were  open  late from 4 to 8 p.m., and offered  free admission. The weather was excellent and the views from Peking deck were gorgeous.