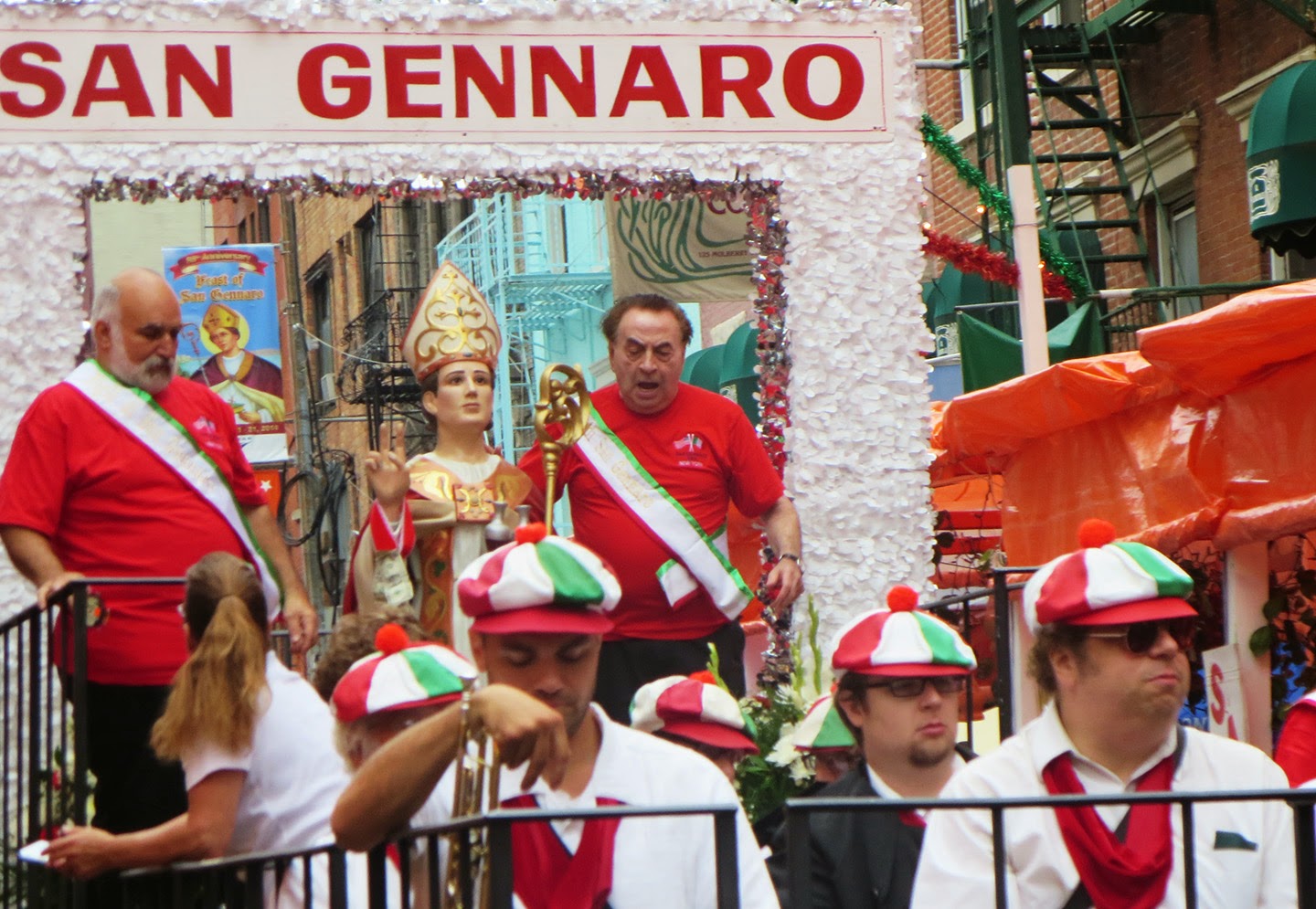 The Feast Day of San Gennaro is the most important religious festival in Naples, Italy. San Gennaro, the Bishop of Benevento and martyr was persecuted for being a Christian and finally beheaded in 305 AD. According to legend, some of his blood was collected by a woman who took it to Naples where it liquefied 8 days later.  A San Gennaro festival is   held in September in many Italian communities outside Italy, including New York and Los Angeles. 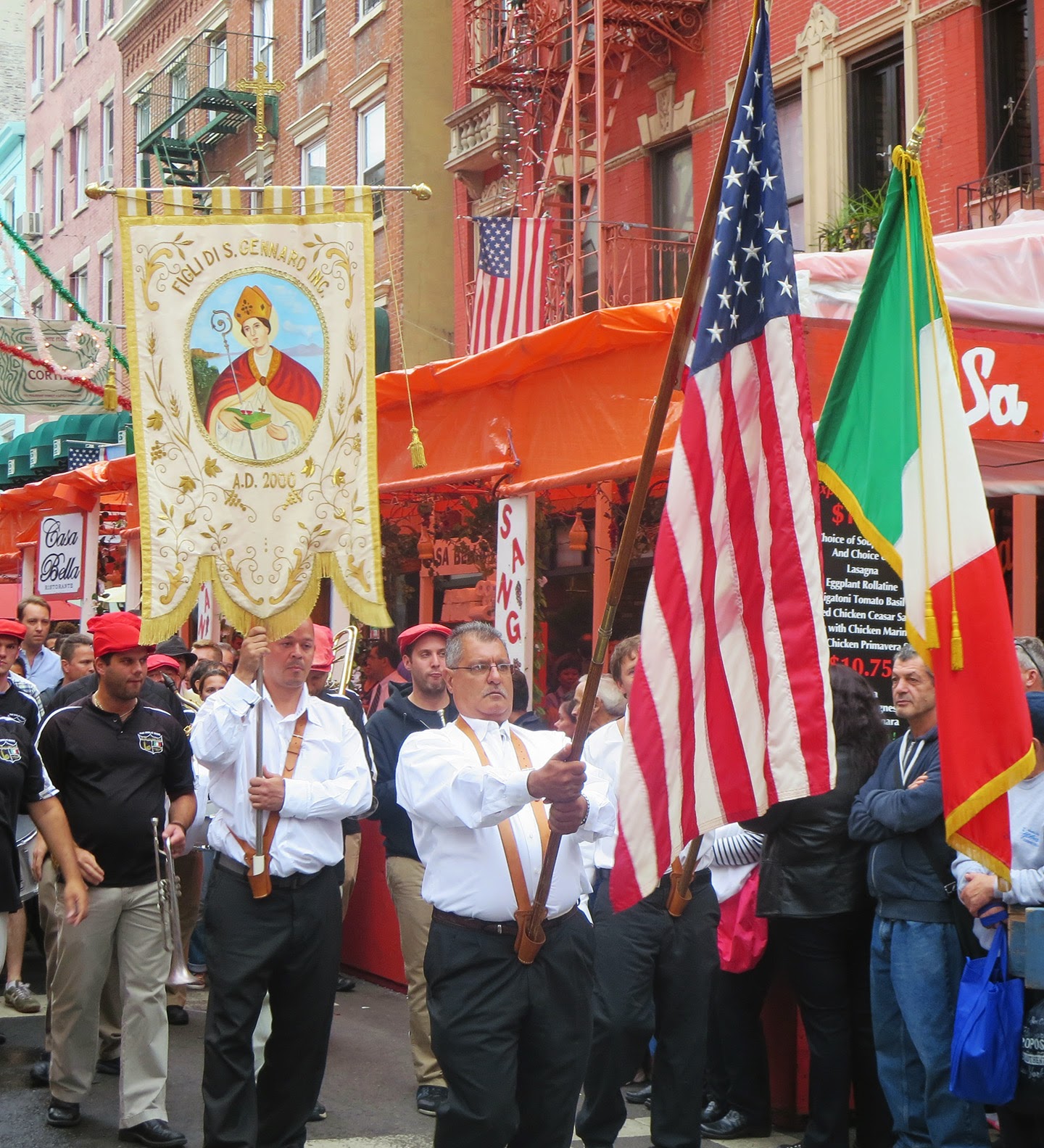 In New York the Feast was celebrated for 88 years , starting from 1926.  It is held annually on the streets of historic Little Italy, the lower Manhattan neighborhood which served as the first home in America for many thousands of Italian immigrants.
The  newly arrived immigrants from Naples congregated along Mulberry Street, between Canal and Houston Streets  that is now the center of the festival. The most important day of the feast every year is September 19, the official Saint Day, in which the Statue of San Gennaro is carried from the Most Precious Blood Church through the streets of Little Italy. 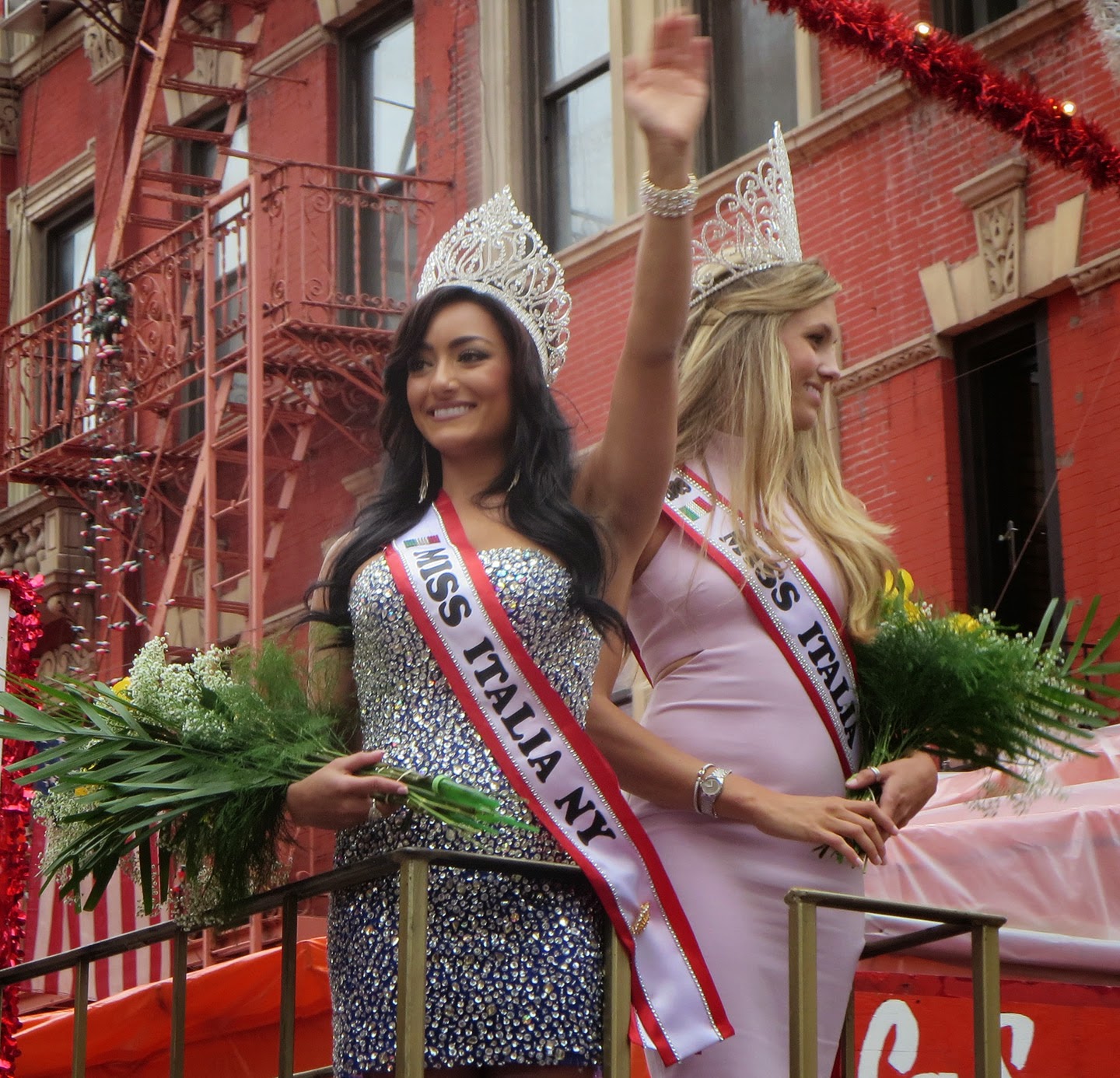 
New York City's Mayor Bill de Blasio  served as Grand Marshal of the Feast's Grand Procession. There were  five parade floats, an authentic gondola wheels, a FIAT convertible with Miss Italia USA and Miss Italia New York, and five  marching bands.  Honored guests   included  elected officials and show business celebs, including actor  Gianni Russo  who  Gianni starred in   "The Godfather" , as Carlo Rizzi,  Don Corleones wife-beating/double-crossing son-in-law.  The Feast of San Gennaro was featured in The Godfather Part II and The Godfather Part III.
In Part II it is during the religious procession associated with the festival that Vito stalks and assassinates Don Fanucci. In Part III, Vito's grandson (and Michael's nephew) Vincent Corleone (née Mancini) assassinates rival Joey Zasa during the festival in public, causing widespread panic throughout Little Italy. A furious Michael Corleone orders that nothing like that ever be done again. 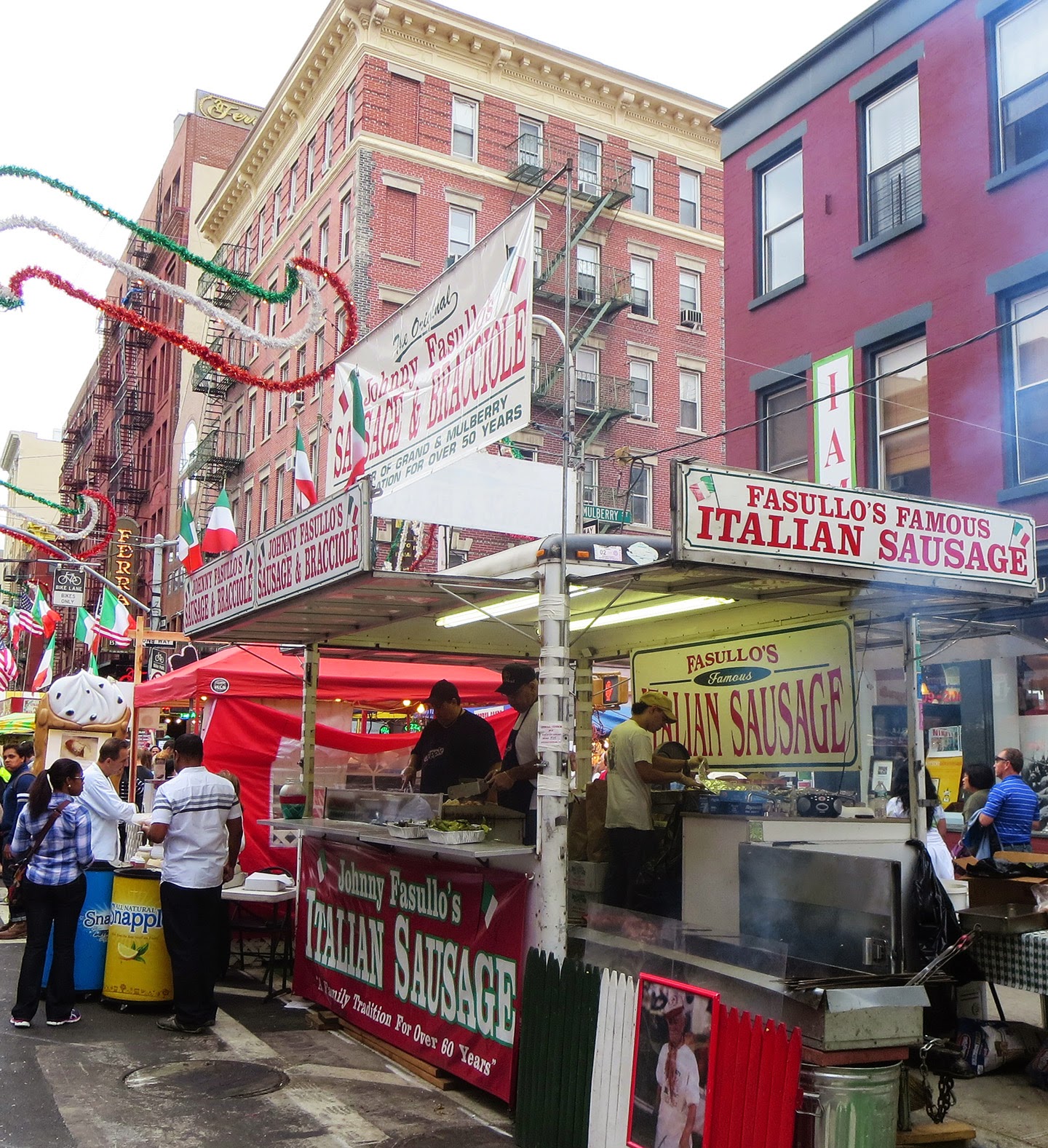 For 11 days and nights the streets of Little Italy are filled with happy people,  eating fabulous Italian cuisine, listening to great live entertainment and just having a wonderful time. 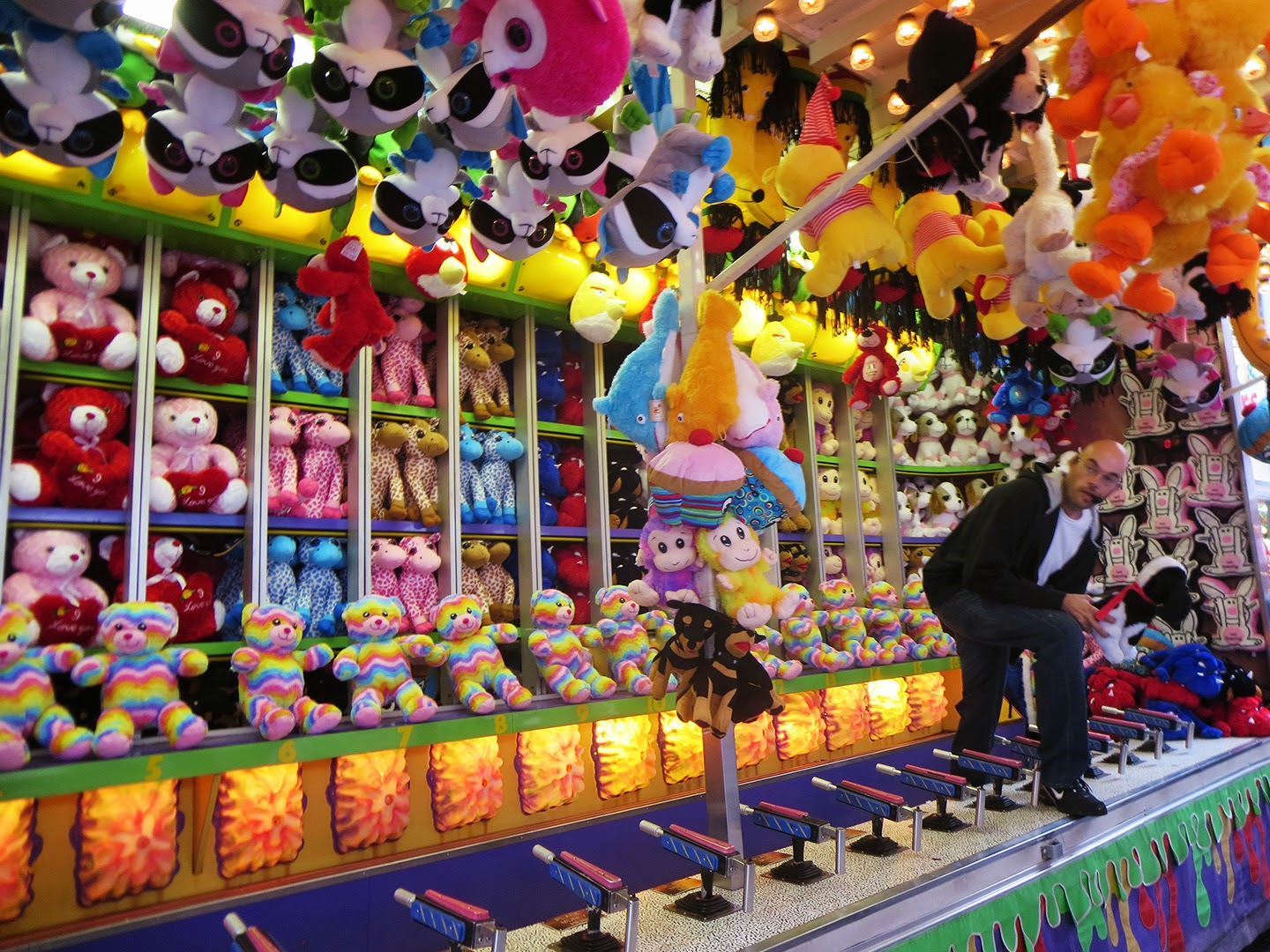 The streets are decorated with festive banners and arches in green, white and red and reach Times Square-level crowdedness.  Restaurants, many of them New York City landmarks, roll out the red carpet for Feast visitors and offe  a lot of food like pizza, sausage and peppers, fried twinkies, fried oreos, zeppole, paella, gellato etc. 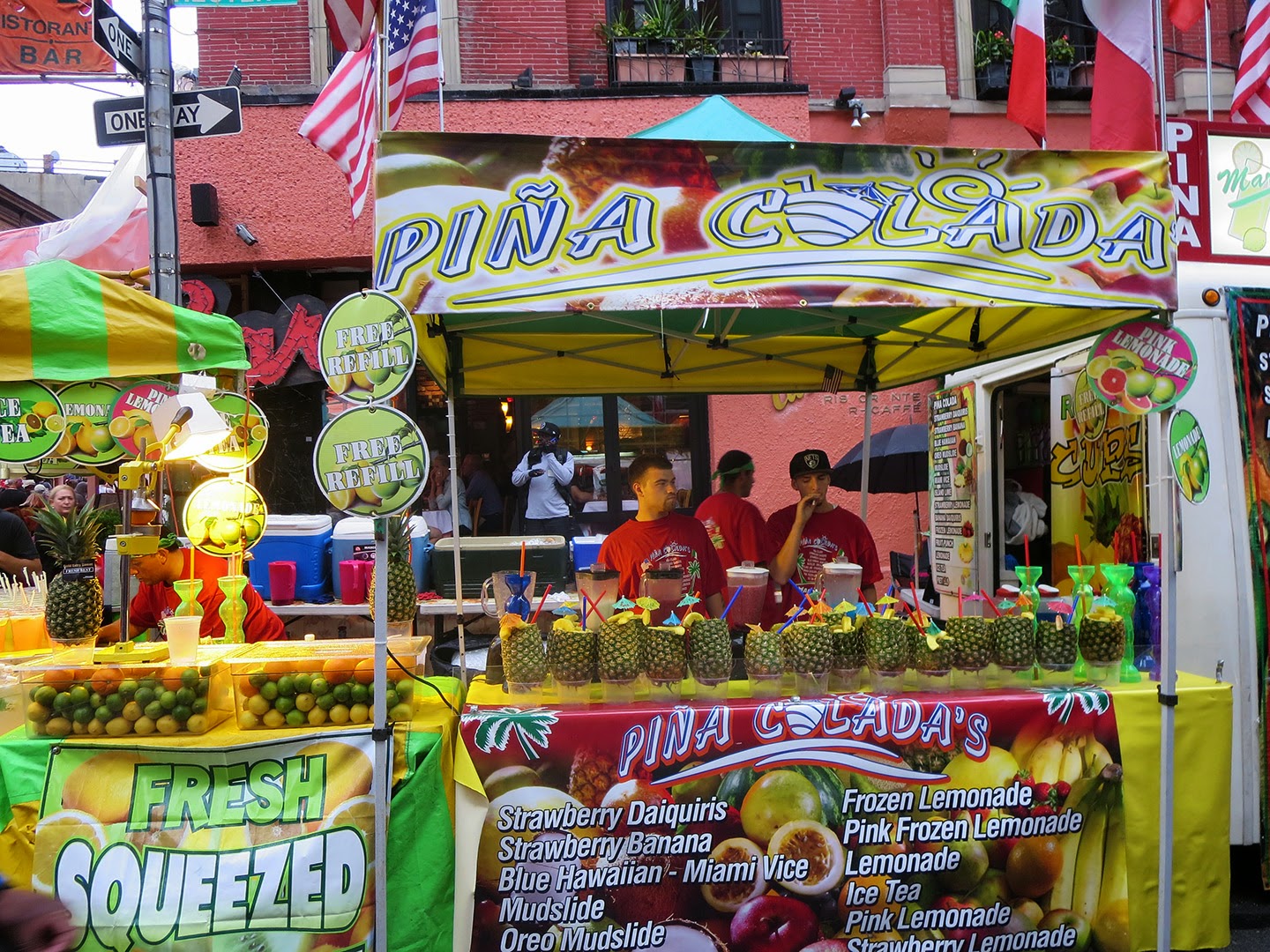 Ferrara's Café and Bakery is going to try and set the world record by creating a giant cannoli - the biggest one ever made. The giant cannoli will be unveiled to the public on Saturday, September 20, at 3PM in front of Ferrara's on Grand Street between Mott and Mulberry Streets.  The giant cannoli is reportedly 12 feet long and nearly 300 pounds!


"This Feast of San Gennaro holds a special place in the place of Italian people everywhere,” says Joseph Mattone, President of Figli di San Gennaro, Inc. "It is a festive period of faith and redemption, a time for remembrance and reconciliation, and a time for celebration. The delicious food, the free musical entertainment that reflects Italian-American culture and heritage are all there. The Feast brings the world to Little Italy and Little Italy to the world.”