14 Wall Street   skyscraper (29 floors) sits across Broad Street from Federal Hall.   It is not the first skyscraper occupying this lot.  The first one was a 20-story Gillender Building, named after millionaire Eccles Gillender.  The building was  completed 1897 and was one of the  eighth tallest structures in New York.  It was named "one of the wonders of the city"    and was demolished in 13 years, in 1910.    Gillender Building  was the  first skyscraper wrecked to make way for a taller skyscraper. But it was not the last one.  For instance, Singer Building, a 47-story office building completed in 1908, was demolished  in 1960 and  1 Liberty plaza with 60 floors was built.


Architects  took  St Mark's Campanile   (the bell tower of St Mark's Basilica in Venice) as a base for the design. Many  skyscrapers took the Venetian bell-tower as a  model for a modern office tower such as The Metropolitan Life Insurance Company Towerin New York.


Other examples in US are the Daniels & Fisher Tower in Denver  and Sather Tower, nicknamed the Campanile, on the campus of the University of California, Berkeley.

But for the architects Trowbridge & Livingston of 14 wall street it was not enough – they used Mausoleum of Halicarnassus,  designed by the Greek architects  between 353 and 350 BC in present Bodrum, Turkey  as a model for structure  on top of the tower.
Mausolus  was a satrap (governor) of Caria in South Asia. The  word Mausoleum  comes from the name of his  tomb . 26 Broadway in New York is based on the model  of the Mausoleum.

The building on Wall street was built for the Bankers Trust headquarters .  Bankers Trust was founded in 1903 and fourteen years later it became a full-service bank and one of the country's wealthiest financial institutions. Bankers Trust adopted the pyramid at the top of the skyscraper as its trademark, and took as its slogan "A Tower of Strength".

When 14 Wall Street was completed in 1912, it was the tallest bank building in the world and one of the three or four tallest buildings in the city.  Over the next few decades  the 14 Wall Street Building became an iconic symbol of American capitalism and the Wall Street financial district.

There was a J.P. Morgan's private residence on the   31st floor 1911 to 1913. Later  penthouse  was converted into an upscale French restaurant called "The 14 Wall Street"  that had panoramic views of New York Harbor and had the  menu in French  style.  However, the restaurant was closed in April 2006.

In 1935 Bankers Trust assets had reached $1 billion. In 1961 the bank opened a second major headquarters in midtown at 280 Park Avenue.  In 1987 Bankers Trust sold the building to 14 Wall Street Associates. In 1991 the building passed to the 14 Wall Street Realty Corp., and in 1992 it was acquired by General Electric Investment Corporation.  On January 21, 2007, the building's owners  agreed to sell the property to Cushman & Wakefield. 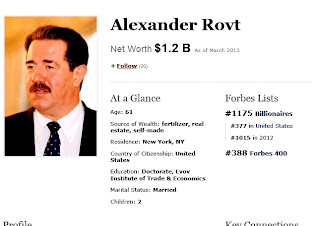 In April 2012, majority control of the  1.05 million-square-foot building  was sold for $303 million in cash to Alexander Rovt, a fertilizer tycoon from Ukraine, who paid off the building's outstanding debt as part of the deal.  This skyscraper is the largest building built by  Rovt but not the first one! In my next  post I’ll tell you more about mr. Rovt from  Mukachevo!
Posted by Секреты Большого Яблока