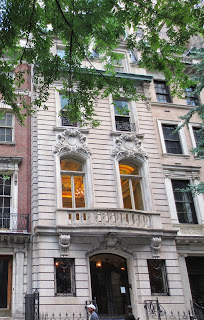 No.7 on the north side of West 54th Street in the fashionable upscale Upper East Side of Manhattan was built in  1900, on the place where St Luke hospital was. This 4-story limestone house was built for Philip Lehman, who was  the son of  one of the founders of  “Lehman Brothers” corporation and  its first chairman. I wrote about “Lehman brothers” in my old posts ( post 1 and post 2).

Today the Lehman House is one in a row of five surviving turn-of-the-century residences.  Among his neighbors was Moses Allen Starr, a neurologist who had worked with Sigmund Freud ( 5 West 54) and James Junius Goodwin, a banker and a cousin of J. Pierpont Morgan ( double lot 9-11 West 54).  The young John D. Rockefeller Jr. moved into 13 West 54th in 1901. In this house  Nelson Rockefeller died of a heart attack in 1979. 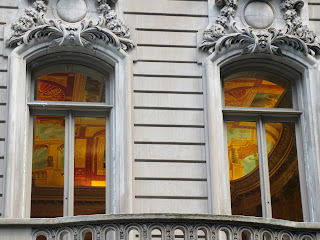 Philip and his wife Cariie had only one son Robert - he inherited the mansion. Robert wrote that his parents went to Europe every year and bought pictures, tapestries and furniture. They bought what they liked and they knew what they want.


Robert succeeded his father as the head of Lehman Brothers and expanded his art collection. Robert was one of the wealthiest people in the United States. For six decades he built upon an art collection begun by his father in 1911.  In 1957 nearly three hundred works were used for a solo exhibit at the Louvre Museum in Paris.

Robert converted his house into private gallery. In 1962 the house was opened to the public for  New York Times called “one of the last great privately held art collections in the world.”  The entrance fee was very high -$25 and was donated   to the Institute of Fine Arts. The price of the movie ticket in 1962 was 50 cents.


After Robert death in 1969 Lehman Foundation donated   Lehman collection    the Metropolitan museum of Art in New York.   Collection includes more than 2,600   paintings,   sculptures, glass, textiles, a enamels, and precious jeweled objects and is one of the  most extensive and exceptional collections in the United States. 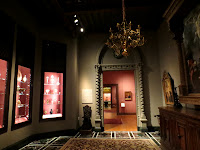 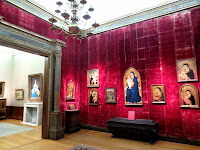 A new wing was erected in the  museum to display the collection. The Robert Lehman Wing includes a central gallery surrounded by a series of rooms intended to recreate the Lehman family residence. One of the rooms in the   gallery is crowned by a stained-glass dome that originally formed a skylight in the Lehman home.


The Lehman House was purchased by the 7 West 54th Street Realty Corp. in 1974 and went through a series of owners until 2006 when it was purchased by Zimmer Lucas Partners for renovation into offices and entertaining spaces. 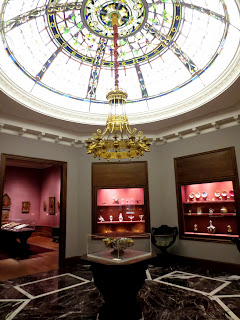 The architects restored the limestone façade and built a   modern glass penthouse addition, invisible from the street. The Metropolitan Museum  returned  architectural artifacts which the museum was holding in storage and  allowed the firm to take casts of other architectural details for replication purposes.
You can fid a virtual tour of the property here.


The house was on sale in 2012 for whopping $65 million.  It is listed now for $49mln  by Corcoran. On June 24  The real  Deal reported   that  the house had a buyer, and it is the most expensive townhouse contract signed so far this year.
Posted by Секреты Большого Яблока