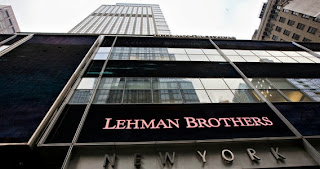 Five years ago, September 15  Lehman Brothers, the fourth largest investment bank in the world,  filed for bankruptcy, officially kicking off the financial crisis.  It was the largest bankruptcy in history -- larger than General Motors, Washington Mutual, Enron, and Worldcom combined. I wrote about the history of Lehman Brothers corporation in my old post.

In 2000, Lehman celebrated its 150th anniversary . On September 11, 2001, Lehman occupied three floors of One World Trade Center.  One of its employees was killed in the terrorist attacks of that day.  Its global headquarters in Three World Financial Center were severely damaged and rendered unusable by falling debris, displacing over 6,500 employees.
Trading operations moved across the Hudson River to its Jersey City, New Jersey, facilities, where an impromptu trading floor was built in a hotel and brought online less than forty-eight hours after the attacks.
The investment-banking division converted the first-floor lounges, restaurants, and all 665 guestrooms on 51 floors  of the Sheraton Manhattan Hotel  near Times Square (811 7th Avenue, New York, NY)   into office space.   The hotel was built in 1962 as The Americana of New York  to serve the huge number of tourists that the 1964 New York World's Fair would bring.
In October 2001, Lehman purchased a 32-story, 1,050,000-square-foot (98,000 m2) office building for a reported sum of $700 million. The building, located at 745 Seventh Avenue, had recently been completed, and not yet occupied, by Morgan Stanley.
Five years ago on September 15, 2008 Lehman Brothers filed for Chapter 11 bankruptcy protection. The Dow Jones closed down  4.4% on September 15, 2008, at the time the largest drop by points in a single day since the days following 9-11.

The Lehman Brothers collapse was the largest bankruptcy filing in U.S. history .  It was the  beginning of the global financial crisis and was a major catalyst of the financial meltdown.  The domino effect began that day.
It's not just that exports to the United States shrunken after September 2008; the flow of goods everywhere, in all directions, has fallen.
The fall of the company affected the President election.  There were two distinct phases of the fall presidential campaign in 2008  pre- and post-Lehman. The collapse of Lehman Brothers made it easier for the Obama campaign to frame the election as a referendum on the Bush administration. 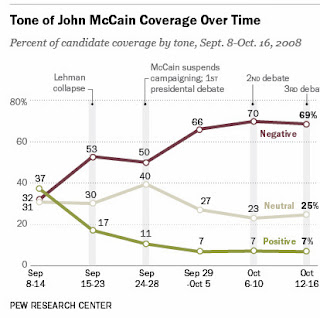 According to Pew Research Center, data analyzing the tone and focus of media coverage through the final stretch of that election showed how that coverage shifted dramatically in mid-September 2008 to focus on the financial crisis and the media narrative grew increasingly critical of Republican candidate John McCain. From Sept. 8-14, 37% of campaign narrative focused on the senator was positive in tone, while 32% was negative (another 31% was neutral).In the period immediately following the Lehman bankruptcy, Sept. 15-23, the tone of his coverage grew much harsher: Only 17% was positive compared with 53% negative and 30% neutral.


The former Lehman Brothers   building in Times Square in New York has become the Barclays Capital building for   the British multinational banking and financial services company.  The Lehman slogan  “where vision gets built.”  disappeared from the lighted screens as has the Lehman name. The Lehman deal doubled Barclays' investment banking headcount: Some 10,000 Lehman workers  transitioned to Barclays in early 2009, though a third being were laid off right away.


JP Morgan moved into 25 Bank Street, London,  the former home of Lehman Brothers. The building   was being sold to JP Morgan for $770 million.

Five years after its implosion, Lehman Brothers , is still a large corporation with roughly 300 employees working full-time in offices all over the world. Most of its remaining employees work out of two floors of the Time-Life building ( 120 West 51st Street,New York, NY)  not far from the bank's former headquarters in midtown Manhattan. A bankruptcy court opted to liquidate Lehman Brothers.  But that unwinding is expected to take at least several more years.  Lehman has more than $30 billion to recover, and several multi-billion dollar legal fights left over how much creditors will recoup from the remaining assets of Lehman's main U.S. operations

Email ThisBlogThis!Share to TwitterShare to FacebookShare to Pinterest
Labels: Lehman