Marquand : The history and new life 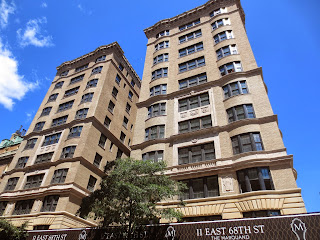 The Marquand, a 14-story residence at 11 East 68th Street, Manhattan, turned 100 in 2013.
Henry Gurdon Marquand  was one of the great art collectors of the 19th century.

After assisting his brother   in the family jewelry Marquand worked as a banker, a Wall Street broker, and a railroad executive and  accumulated a large fortune.
He was the treasurer and the president  of the Metropolitan Museum of Art for 13 years  from 1889.
In 1889 Mr. H. G. Marquand donated a collection of paintings by Old Masters and artists of the English school of the highest value. In 1891 he donated $15.000 to purchase a collection of Grecian, Roman and Mediaeval glass.
In 1881 Marquand commissioned his friend the eminent architect Richard Morris Hunt to design a mansion for him in New York City. Morris Hunt built Petit Chateau for The William  Vanderbilt on the northwest corner of 52nd Street and Fifth Avenue and the Breakers, the magnificent estate for Cornelius Vanderbilt in Newport , Rhode Island.
It was Hunt's fourth project for Henry.  Nine years earlier Hunt had built Marquand a summer residence, Linden Gate  in Newport, Rhode Island. (The house burned down in 1973).


Hunt built a four-story mansion and two smaller dwellings next to it on the northwest corner of East Sixty-eighth Street and Madison Avenue in 1884, but  it took several more years, however, to complete the interior.


The rooms of the Marquand mansion were arranged in a rectangular plan around the centrally located hall, which was one of the most important spaces in any nineteenth-century home. Each room was decorated in a different historical style, forming an appropriate background for Maquand's  collection.
Henry Gurdon Marquand  died in New York City at the age of 82. His   collection and rare books were sold in 1903. The house was sold in 1909 and again in 1912.
New York Times reported: “The famous Marquand house…has been sold and will be torn down early in April, to make room for a big apartment house.” Most of its decorations were destroyed.

In 1913 the architect   Herbert Lucas built brick a and terracotta u-shaped 11- story  building  with its courtyard entrance and apartments of seven to 16 rooms. 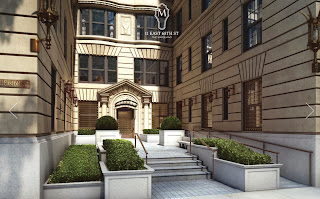 In 2013, one hundred years after the building was built  rentals were converted into super luxury condominiums  by HFZ Capital.
The 11 East 68th Street building’s new condos  were on  the market from  June 2013, with 22 condos ranging in price from $15 million to $40 million.
The Marquand’s two penthouses with Central park views, one with six bedrooms and another with seven hit the market in October with $43 million and $46 million price tags, respectively.
Read more: "The Once and Future Marquand" in New York Times