FaceBook just moved into the new office, 770 Broadway  on Monday, February 24.The new office, situated on two floors, is 100,000 square feet. Facebook now has 320 employess in New York. Three years ago, Facebook employed just 80 in New York. Facebook looking to hire more engineers, recruiting from local schools like NYU , Cooper Union and beyond.
New office was designed by Frank Gehry- american architect who  is credited with popularizing deconstructivism.Vanity Fair  in 2010 labeled Frank Gehry as "the most important architect of our age".

Deconstructivism in architecture was born in the late 80s of the twentieth century. Deconstructivism explores fragmentation and distorts the walls, roof and  interior volumes. The structure of the building has a feeling of controlled chaos and stimulating unpredictability.


The most spectacular example of the deconstructivism style   is Frank O. Gehry’s  titanium-clad Guggenheim Museum at Bilbao, Spain.
Frank Gehry  was born in Toronto in 1929 and moved to California in 1949. His  parents were Polish Jews. Frank  was given the Hebrew name "Ephraim" by his grandfather.  A number of his buildings, including his private residence, have become world renowned tourist attractions.
There are not so many deconstructivist buildings in New York City.


I know only two- both built by Gehry. In 2007 the architect built IAC Building, on  555 West 18th Street, in Chelsea area of New York City. You can look at the building from the HighLine - the newly open park.


In 2011 Gehry built "New York by Gehry"  - a 76-story skyscraper at 8 Spruce Street in Lower Manhattan, south of City Hall Plaza and the Brooklyn Bridge.
It is  the 12th tallest residential tower in the world and the second tallest residential building in the Western Hemisphere ( the first one is  One57 on West 57 in Manhattan- read about it in one of my posts ).  The tower contains more than 800  residential rental units,  a rarity in New York’s Financial District.  Available studios and one-bedrooms rent for skyward of $3,700 a month and three bedrooms for $11,975 and up.
For the ultimate elite, there are three penthouse apartments,    which will go on the market for $40,000, $45,000 and $60,000 a month.

The first five floors of the 76-story tower house the new Public School 397, the entrance of which is   separated from the residents’ entrance on the west, so the streams of children arriving and lawyers and bankers leaving for work do not have to cross. The building also has an ambulatory care facility for New York Downtown Hospital and a ground-floor retail space.
There is a  50-foot swimming pool on the seventh floor, which has glass doors, leading onto a deck, that are left open in the summer. There is a children’s playroom, with toys and a puppet theater, and a “tweens’ den,” with multicolored plush furniture and a Wii. There is a large gym, yoga and Pilates studios, and a spinning room with 20 bikes. There are also two golf simulators. 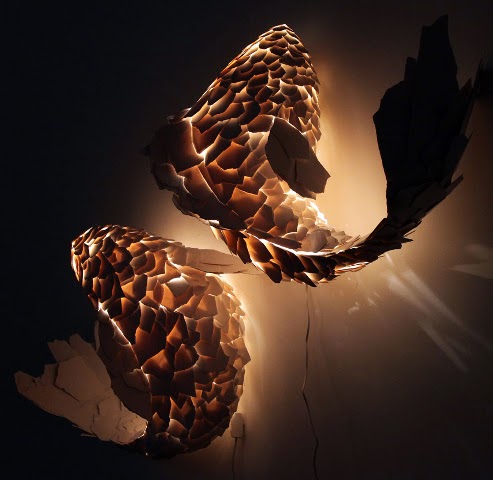 In 2014 Frank Gehry will design a new skyscraper in Berlin, Germany that will be the capital city's tallest residential building.

In addition to designing over 30 existing buildings, Gehry has distinguished himself with a handful of furniture designs, created throughout his career.
Gehry also designed a series of Fish Lamps using "color core" formica, which are now in private and museum collections.

Read more:
Architecture in the Age of Gehry ( Vanity Fair )