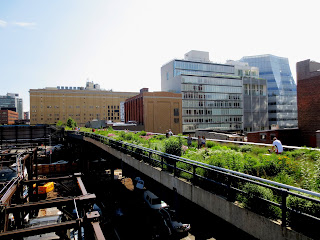 Before 2009 High Line was  is a 1.45-mile-long  abandoned elevated railway.  Today The High Line is a public park owned by the City of New York, and maintained and operated by  “Friends of the High Line” founded in 1999 by community residents. Tripdavisor  ranked it  #18 of 747 attractions in New York City – higher than New York Public Library and Grand Central Terminal. High Line is the winner of  Travelers' Choice® 2013. 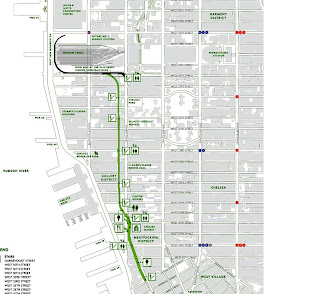 Millions of people are visiting it every year, making the High Line the most visited park per acre in the city.  In 2011 3.7 million people visited the High,  only half of them New Yorkers.  In 2012, the High Line welcomed more than 4.4 million visitors.

In 1847 the new line with railroad tracks for freight trains  was built  on the West Side of Manhattan. The traffic was heavy and  accidents began occurring between trains, pedestrians and  horses.  Men on horses had to ride in front of trains waving flags to free the way . They were called the WestSide Cowboys.  In order to eliminate hazardous conditions   the state of New York and the New York Central Railroad opened The High Line to trains in 1934, removing dangerous trains from the streets. 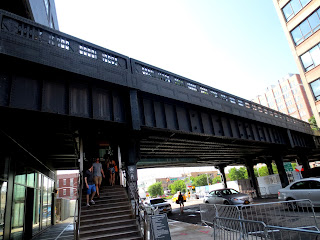 The price of the line was  over $150 million in 1930 dollars—more than $2 billion in today's dollars.  The High Line was designed to go through the center of blocks   and   connected directly to factories and warehouses, allowing trains to roll right inside the buildings.  Milk, meat, produce, and raw and manufactured goods could come and go without causing any street-level traffic.
The double-line viaduct was built strong enough to support two fully loaded freight trains.  After the World War II   the Interstate highway network grew, and the rise of the automobile led to drop of a rail traffic. In 1960s the railroad line was operating  in the red. The last freight delivery on the remaining northern part of the line took place in 1980 with three carloads of frozen turkeys.  The most southern part of High Line was dismantled and the High Line stay abandoned for the next twenty years. 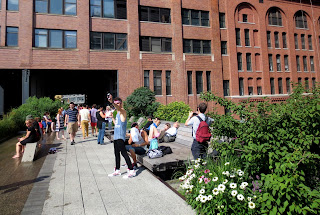 In 1999, the community group Friends of the High Line was formed by Joshua David and Robert Hammond, residents of the neighborhood.   Robert, graduated with Honors in History from Princeton University, lived in the West Village since 1994. Joshua, with BA from    University of Pennsylvania, has lived in Chelsea since 1986 and was a freelance magazine writer.  The Friends  used Promenade Plantée in Paris as a prototype for the proposed elevated park.

The first elevated park in the world  Promenade Plantée   was constructed in 1994 on  the  19th century railway viaduct, connecting Paris with Strasbourg. Viaduct was built in 1850s and abandoned in 1960s.

Robert Hammond  said: I lived in the neighborhood so I had always seen it when walking around, but I didn’t think it was all connected. I really didn’t think that much about it until I read an article in The New York Times in the summer of ’99 that said it was threatened with demolition, and it included a map. … 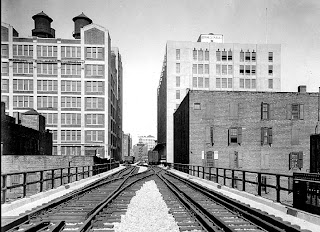 I assumed someone would be working to preserve it. I called around and thought the American Institute of Architects or the Municipal Arts Society would be working on this. So many things in New York have preservation groups attached to them. But pretty quickly I found no one was doing anything for the High Line and that it was actually going to be demolished. I heard the proposed demolition was on the agenda for a community board meeting in my neighborhood so I went to my first community board meeting ever and sat next to Joshua, who I didn’t know at the time. By the end of the meeting we realized everyone in the room was in favor of demolition except for us. So we exchanged business cards and we said, “Well why don’t we start something together?” 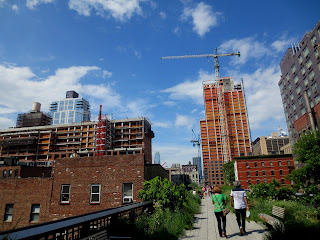 In 2002 Friends of the High Line gains first City support  and in 2003 a competition  started. 720 teams from 36 countries entered the competition and hundreds of design entries were displayed at Grand Central Terminal.  In 2006 the winning project by James Corner Field Operations and Diller Scofidio + Renfro was on display in the Museum of Modern Arts and in the same year the construction of the first section begun.  In June 2009 the first Section was opened to Public.
Posted by Секреты Большого Яблока