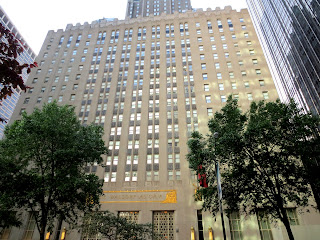 Waldorf-Astoria that sits on posh Park Avenue between East 49th and 50th Streets.   Every president of United States after 1931 ( the year when the current Waldorf-Astoria was built) was the guest of the hotel.  Waldorf-Astoria   was built by two Astor cousins. This famous hotel is  not the first hotel in new York that was built by Astor.  The first one was built by the founder of the family   John Jacob Astor, who came to America in 1763 from Germany and made a fortune  in fur-goods  trading. 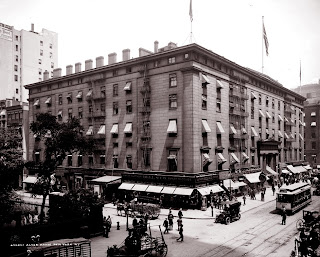 At the beginning on the XIX century Astor started buying and renting land. His motto was “never sell,” and he didn’t. He assembled the building lots around his former house and opened hotel in 1836 on the west side of Broadway between Vesey and Barclay Streets. There were more than 300 rooms in 6 floors. The hotel had its own gas manufacturing plant that supplied gas lighting for the building.  A steam engine in the basement ran a pump that provided water to all floors and powered machinery in the kitchen and laundry.   There were 17 bathrooms and 2 showers. 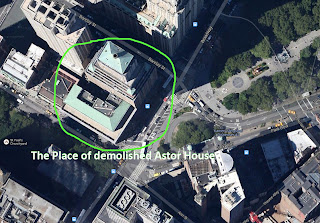 The running water for these facilities was provided by the   reservoirs in the attic.  The price was $2 per day. President Abraham Lincoln, Grand Duke Alexis , Admiral Farragut  and Charles Dickens slept here. The southern section of the hotel was demolished in 1913 because of the subway building.  The rest of the house was shattered in 1926 and the Transportation building was built.

In 1827   William Backhouse  Astor, son of   John Jacob Astor I, who inherited the major portion of the estate, purchased a  farm north of the city and built a small brick house  at the corner of Fifth Avenue and 34th Street.  Within a few decades Astor’s section of the land became the most prestigious residential district in the United States.  William Backhouse Astor was the wealthiest person in the U.S  - he more than doubled the family fortune. After Williams’ death , the Fifth Avenue property was passed to his sons. 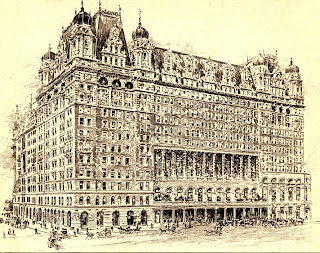 In early 1880s one of Williams’ grandsons, William Waldorf Astor  opened the 13-story Waldorf Hotel on the site, which had formerly boasted his mansion, at Fifth Avenue at 33rd Street.

Later William moved to London and become a British subject in 1899.  He accepted a peerage of the United Kingdom and was elevated to the rank of Viscount.  In 1908 he opened hotel  in London,  known now as “Waldorf Hilton” now.   The “Waldorf  hotel “ in New York had 17 stores, and was designed by the same architect   who later designed the Plaza Hotel in 1907.
There was a long corridor connecting two of the most popular restaurants in Waldorf, the Palm and the Empire rooms.  Almost from the opening, the corridor was a popular promenade for ladies of fashion to display their gowns and jewelry. The society editor of the New York Tribune called it “Peacock Alley”.
Four years later his cousin, John Jacob Astor IV built 17-story Astoria Hotel an adjacent site.  John Jacob  had a lavish house on the corner of 5th Avenue and East 65. El Emanuel  temple  occupies this lot now.  You can find more about  El Emanuel   in one of my posts. 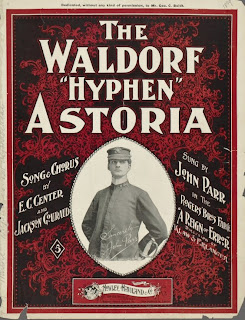 The hotels were initially built as two separate structures, but the architect planned the Astoria so it could be connected to the Waldorf by the “Peacock Alley”.  The combined  hotel was originally known as The Waldorf-Astoria with a single hyphen, as recalled by a popular expression and song, "Meet Me at the Hyphen."  The first words of the song are “At the Waldorf hyphen  Astoria no matter who or what you are”.
The sign was changed to a double hyphen (Waldorf=Astoria)   by Conrad Hilton when he purchased the hotel in 1949.  Hyphen  completely removed from the hotel name  in  2009. 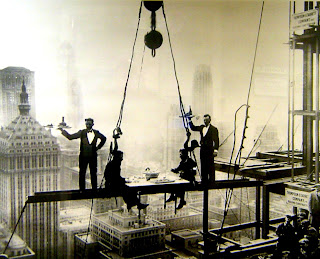 In 1929 the original hotel was sold to Bethlehem Engineering Corporation and  torn down   to make room for the Empire State Building.  Former Waldorf manager Lucius M. Boomer had retired to Florida after the demolition  but he retained exclusive rights to the name, which he transferred to the new hotel. Boomer died in an airplane crash in 1947 and Conrad Hilton bought The Waldorf Astoria in 1949. The new Waldorf-Astoria was opened to the public on October 1, 1931.
Learn More about the history of the hotel from New York City History