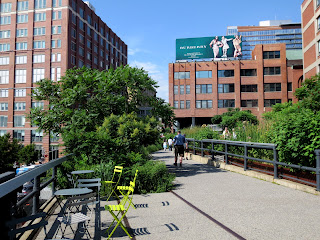 High Line Park, Part 1
The High Line is an elevated freight rail line transformed into a public park on Manhattan's West Side. It is owned by the City of New York, and runs for 15 blocks from  Gansevoort Street, three blocks below West 14th Street    up to 30th Street.  Park is open daily, from 7:00 AM to 11:00 PM and has multiple access points almost every two blocks, but only one restroom station  at the 16th Street access point. I wrote about the history of High line in the first part of my story. 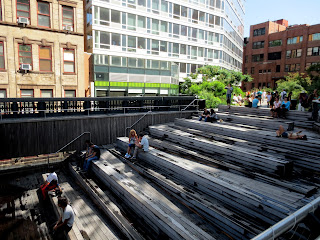 The park does not contain any recreational facilities and does not permit biking and rollerblading and dogs are not allowed.  Park is place for relaxation and meditation and provides visitors with panoramic views of NYC,  the Hudson River, and the New Jersey waterfront. Commuters  and morning joggers use High Line as a shortcut without traffic lights. 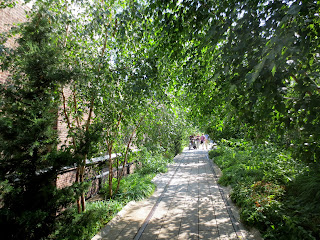 You can relax  on the grass  to escape from the heat at summer.  A little patch of green in the middle of so much brick, concrete  and steel can be very soothing.  There is a sundeck  at 14th Street and  a  shallow skim of water that bubbles up over a section of the pathway  and you can put off  you shoes  and tiptoe through the cool water- it is really priceless on a hot summer day!
There are many individual benches and nooks scattered about. There are nice  beach benches you can use to lounge. There's also two small theater like seating areas where you   can have a meal or just  do people watching. 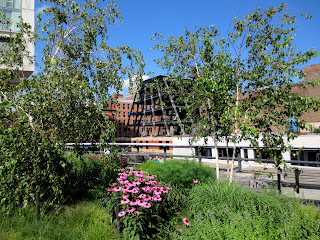 The wood used on the High Line was harvested from a managed forest and has  life-span of up to 100 years. The High Line's landscape uses the same technology as a green roof. Plantings, mostly native  and    produced by local growers, create shade, oxygen, and habitat for insects and birds. Many of the 1930s railroad tracks are still in their original locations, integrated into the planting beds. 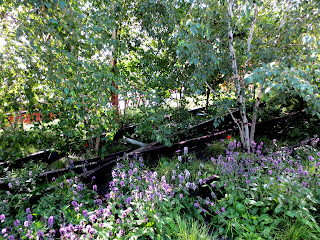 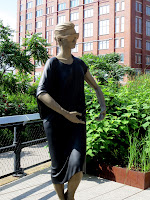 The southern section between Gansevoort and West 12th Streets is more heavily planted than the rest of the park.  In 2013 High Line Art announced Busted, the HIGH LINE COMMISSION that includes figurative sculptures, celebratory portraits, and c monuments installed on the High Line. 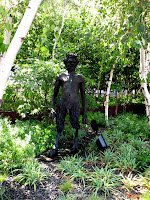 The public is invited to participate in an open poll and vote online for a person who in their opinion should be commemorated in a monument to be installed on the High Line.
There are a lot of food vendors on the High Line. The earliest  to open at 9AM is  BLUE BOTTLE COFFEE at West 15. There is a full service seasonal open air café TERROIR AT THE PORCH,  also as West 15 . The cafe is open up till 9PM. 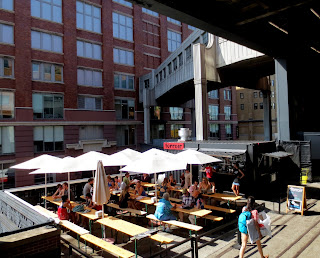 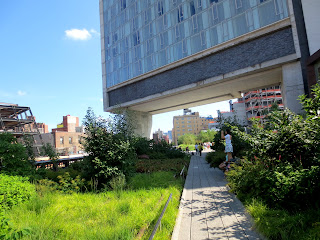 The only one modern building that was raised over and above the   park is Standard Hotel. The hotel was designed by Todd Schliemann and looks like an open book. 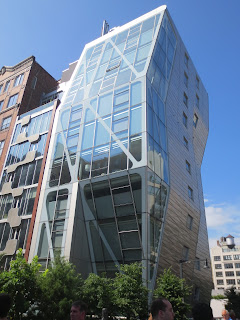 Zaha Hadid, a famous Iraqi-British architect,  has a plan to build  an 11-story, luxury apartment with 37 units block near the second section of the High Line in Chelsea, at 520 West 28th Street. It will be her first project in New York.  In February 2013 Zaha  was assessed as one of the 100 most powerful women in the United Kingdom by BBC Radio 4.
Inspired by  New York's success with its High Line park, Philadelphia plan  to redevelop an abandoned viaduct into an elevated urban park.  Chicago has a $91 million project  to convert BloomingdaleTrail into the public park.

Other countries already have or plan to have public parks similar to New York High Line.  I wrote in my previous post that Promenade Plantée in Paris, France was a model for New York High Line Park.
London will have its’ own version, “Missing Link”,  in 2017. Two London architecture firms won a competition to design a landscaped walkway  south of the River Thames, that will link new and existing galleries, public works of art and an open-air auditorium.  Last year Joshua David and Robert Hammond, the co-founders of the New York High Line, gave  a talk at the Garden Museum on designing urban green spaces in London.


New York City already has the High Line, but another project is making headway: The Delancey Underground or “Low Line”. The Low line, which currently exists as a former trolley terminal below Delancey Street will be  transformed into the city's (and world's) first subterranean park.  The former Williamsburg Trolley Terminal was opened in 1903, as a depot for streetcars ferrying passengers between Williamsburg ( Brooklyn)  and the Lower East Side.  It was in service until 1948 when streetcar service was discontinued, and has not been used ever since.
Posted by Секреты Большого Яблока