Tudor City - the urban utopia in the center of Manhattan 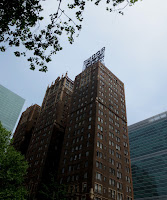 If you go along East 42 in Midtown, Manhattan  up to the east  end you can see a huge sign  on the top of the building  ”Tudor City”. This city within the city is the first residential skyscraper complex in the world built by one of the largest developers in New York   Fred F. French.


French wanted to create an apartment complex with a suburban ambiance and a spirit of community, the urban Utopia-- a "human residential enclave" that boasted "tulip gardens, small golf courses, and private parks."  He hoped to attract young people who would want to spend one to two nights in the city, but he also wanted to have large apartments for families. 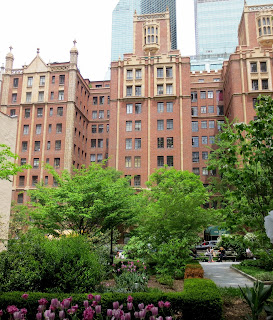 In 1925 Fred F French   started construction of what he called “The largest project in Midtown.”  The project was named Tudor City.   In order to get money for this development French invented the “French Plan”, which allowed citizens to buy stock in his plan, receive dividends and share in the profits.

The location for the construction was selected with great foresight.  It was very close to the newly built Grand Central Terminal and commercial hub.  French secretly  bought  up the old tenement buildings that then occupied the cliff  First Avenue between E 41st and E 43rd Streets.

Most of the land was purchased before the former owners realized they could have a better price.


French put his complex on a Prospect Hill cliff with the three main towers  facing west, turning it back to the river.  At the time, the waterfront along the East River had meat packing houses, coal-burning Con Edison plant, glue factory, slaughterhouses and barge landings. 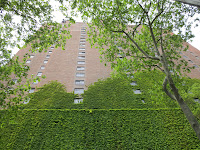 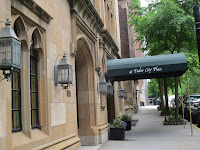 Tudor City was considered  "the real estate investment of the future" and the largest housing project in Manhattan to date. The architecture of Tudor City is a mix of early 16th Century Tudor and late 16th Century Elizabethan style.  Tudor style was a very popular style for suburban housing at that time. 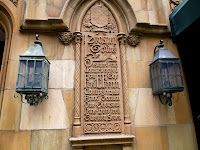 Complex consisted of 12 apartment buildings with more than 3000 apartments and 600 hotel rooms.  At that time average rent was $500 per room per year.

Community had a drugstore, a laundry, a grocery store, a liquor store, restaurant, flower shop, and even a kindergarten. Many of these amenities were in the same location as their successors today. There were four beautiful gardens with arbors and gazebos, fountains and tree-shaded walks on both sides of 42d. There was   even a 18 hole miniature golf course with lighting for evening play. 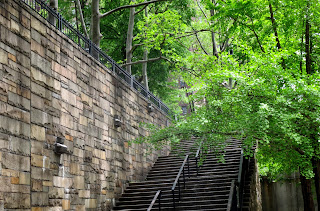 There was a local newspaper “Tudor City View” published by residents from 1941-1968.  There was also theater workshop, the camera club, the art league, the language club, the chorale at that time.
After the Second World war  John D. Rockefeller bought the land near the rover to build United Nations building.  A tunnel that channeled 42nd Street traffic beneath Tudor City to First Avenue was replaced by the bridge and the steps on either side of 42nd Street were created to provide pedestrian access to Tudor City.  Tennis courts in 1954 were demolished to free the space for new Tudor Gardens. 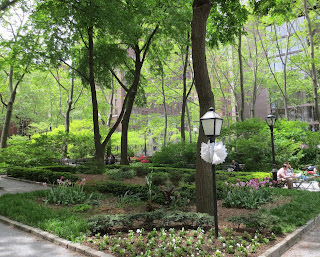 French died in 1936 but the firm he founded continued to own and manage the properties until 1972, when the Helmsley-Spear company bought Tudor City.   Mr. Helmsley's planned to erect several high-rise buildings on the site of the two parks. On a sunny Sunday morning on memorial weekend in 1986 a bulldozer appeared near the park.   An early riser noticed it coming and sounded the alarm. People poured into the street and blocked the bulldozer from entering the parks. After a prolonged battle, the community won.
In 1988, The Landmarks Preservation Commission designated Tudor City a Historic District. Tudor City Greens, Inc. was formed in January 1987 to take care of the parks.  Each summer for the last five years, one of the parks has hosted a concert series.

Tudor City now is a home to over 5000 residents  and you can be one of them – just buy one of the apartments - the small studio or one  bedroom. The price is about $1000 per sq. feet.   Or you can rent a small studio with the Murphy bed for less the 2K - renters make up 60 percent of residents at 45 Tudor City Place, or Prospect Tower, the building with the “Tudor City” sign on its roof.