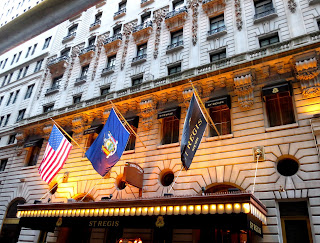 The St. Regis hotel, on the corner of 5th avenue and East 55 street  was built by John Jacob Astor IV, one of the wealthiest men in America and the member of a prominent Astor family.   Construction began in 1901 and the hotel opened September 4, 1904.  Jack was a great-grandson of the founder of the family John Jacob Astor  and the son of  Caroline Astor,  referred   later in life as "the Mrs. Astor". Here portrait  by the French artist Carolus-Duran  is in   the  Metropolitan museum, New York.

Astor was born in the family estate  "Ferncliff," north of the town center of Rhinebeck, New York. The estate, reduced to 50 acres and renamed "Astor Courts,"  later became a wedding venue.   The wedding of Chelsea Clinton took place there on July 31, 2010. 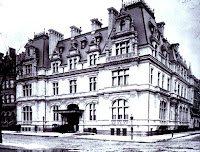 In 1891 Astor was married to Ava. Together  they had a son Vincent and  daughter Alice. The family been living in their luxury house on East 65 and 5th Avenue.  En Emanuel  synagogue is now on this place.

In 1894 Astor  wrote “ A Journey in Other Worlds” , a  science fiction novel about the space ship Callisto that travel  in  2000 to  the planets Saturn and Jupiter.  Inventions Astor envisioned,  included a picture telephone, an airplane with the ability to fly to Europe in one day, an electric automobile, hidden phonographs by the police to record conversations of criminals and color photography. Astors' pneumatic walkway invention won a prize at the 1893 Chicago World's Fair, and he was one of the first Americans to own a motor car.

Seven years before St. Regis, In 1897 Astor built the Astoria Hotel  adjoining the Waldorf Hotel which had been built by his cousin William Waldorf Astor.  The new complex became known as the Waldorf-Astoria. You can find more about Waldorf-Astoria in my posts. 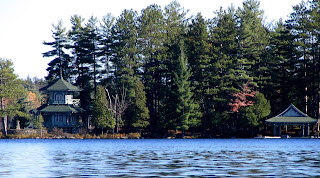 At the suggestion of his niece, Miss Helen Roosevelt , Astor named the new hotel after 742-acre Upper St. Regis Lake in the Adirondacks, where New York City’s richest and most powerful gathered their families  long before the Hamptons became their summer playground.  Astor liked the lake where his brother-in-law, J. R. Roosevelt, had a camp.
The construction of the hotel cost over five and a half million dollars. There were 18 floors in the hotel and the building was the tallest  in the city when built. 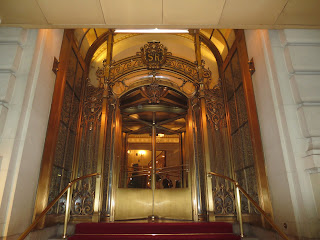 There were marble floors and hallways from the quarries in  France , Louis XV furniture from France and a library with more than 3000 books. There were  telephones in every room, a fire alarm system, central heating and an air-cooling system in every room of the hotel. There was even a central vacuum systems – innovation  for the beginning on the XX century.
The list of celebrities who  were the guest of the hotel is long and include Salvador Dali and his wife Gala, Marlene Dietrich and Russian prince Serge Obolensky, who lately marries Jacks daughter  Alice.

In  1909 at the age of 47  Astor divorced Ava and, two years later, married eighteen-year-old Madeleine Force. Mr. and Mrs. Astor travelled to Egypt and Paris and, in the spring of 1912, decided to return to America on board the brand new Titanic. After the crash Astor helped his pregnant  wife to climb through the windows of the enclosed promenade and board a boat. His wife survived.  His body was recovered seven days later.

Astor's son Vincent inherited the hotel and sold it to Benjamin Newton Duke.In 1927, the Dukes added a new wing  on  the east end, added a rooftop ballroom/nightclub, and increased the height to 20 stories.  In 1935, in the depths of the Great Depression, Vincent Astor bought the hotel back from the Dukes. The lobby of the hotel  and elaborate marble staircase  has not been altered since Astor died.  And the thousands of leather-bound books that he collected have been preserved on the same bookshelves for 100 years. 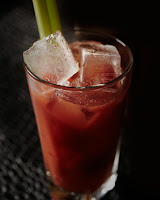 In 1934 bartender of the hotel bar Fernand Petiot   invented a drink   which he called the "Red Snapper". It has since become known around the world as the Bloody Mary.

On April 4 , 2012 the St. Regis held a small dinner in the hotel library to commemorate the 100th anniversary of the Titanic's sinking. The guests, who included some of Astor's descendants, were dressed in fur and feathers as they perused his books and dined on food inspired by the last meal served aboard the ship.