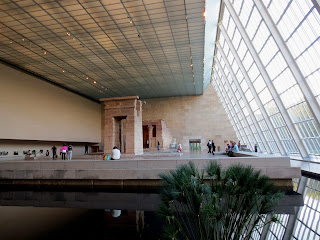 If you’d like to see ancient Egyptian temple or obelisk  you do not need to buy expensive tickets and book a hotel in Cairo.  Egyptian artifacts   are spread throughout the world in numerous museums.  More than one obelisk was carried off from its original locale to grace the grounds of a foreign country.  Temples too can be found in the US, and several European countries.  You can go to Metropolitan Museum in New York and see the beautiful sandstone temple  of Dendur standing in the middle of a bright huge hall. 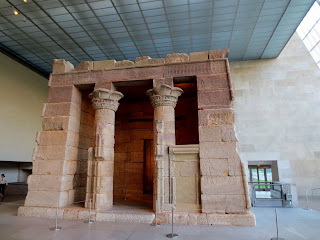 The temple of Dendur is a very early Roman Period temple built during the rule of Augustus who ruled Egypt between 30 BC and 14 AD. Originally, the Temple   stood on a wide, stone built platform on the left bank of the Nile about  50  miles ( 77 kilometers)  south of Aswan. It  was dedicated to  Osiris,   Egyptian god of the underworld and of vegetation  and his wife Isis.


Egyptian temples were not simply houses for a cult. The temple in Egypt was  an image of the natural world as the Egyptians knew it. That’s why we can see papyrus and lotus plants at the temple base  and  image of the sun above the gate.   The original reliefs were painted red, blue, green, yellow and black, from archaic descriptions, but those colors were washed away after the first, smaller Aswan dam was built.  In the 19th century, graffiti was left on the temple walls by visitors from Europe.

The Temple of Dendur was one of several monuments of antiquity threatened with permanent submersion by the construction of the Aswan high Dam in Egypt. 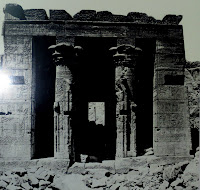 The Dam was constructed between 1960 and 1970, and has had a significant impact on the economy and culture of Egypt. In June 1956 the Soviets offered Nasser $1.12 billion at 2% interest for the construction of the dam.  The Soviets also provided technicians and heavy machinery. The dam was designed by the Soviet Hydroproject Institute along with some Egyptian engineers.  Work on this massive project was begun in 1960; the Dam was officially opened in 1970.   Nikita Khrushchev called it "the eighth wonder of the world". The High Dam increased the country's irrigated area by a third.  The dam flooded a large area, causing the relocation of over 100,000 people and submerged archaeological sites. 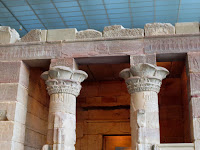 Egypt had requested aid from the world’s nations in saving some its most precious monuments. In 1960  UNESCO made an international call to save this rich historical legacy.  22 monuments and architectural complexes, that were threatened by flooding from Lake Nasser were preserved by moving them to the shores of Lake Nasser.
As a sign of gratitude for the help Egyptian state donated the temple of Debod to Spain , Temple of Taffeh to Germany and  temple of Dendur to US. 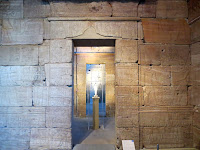 The temple of Dendur was removed from its original site   in 1963. The stone blocks of the temple weighed more than 800 tons in total. They were and transported to the United States. Several  institutions made bids for housing the temple, in a competition that was nicknamed the "Dendur Derby" by the press.
There were plans to  re-erect  the temple on the banks of the Potomac River in Washington, D.C ( as Jacquelyn Kennedy proposed)  or on the Charles River   in Boston. But weather conditions  are different in Egypt and US.
The temple's sandstone would have suffered from the outdoor conditions.
Finally, on April 27th, 1967, the temple was awarded to the Metropolitan Museum of Art.  Met asked the city for $1.68 million dollars  to re-erect e temple.  The temple arrived and  was housed in a bubble - the first  air -filled structure ever approved by  the building apartment. 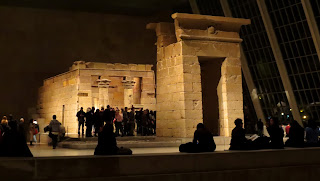 Since September of 1978, the temple has formed the Sackler wing of that museum. There is a reflecting pool in front of the temple and a sloping wall behind it, represent the Nile and the cliffs of the original location. The glass on the ceiling and north wall of the wing is stippled in order to diffuse the light and mimic the lighting in Nubia. 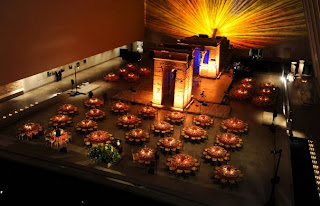 Before  1994  museum visitors   were not permitted closer than 30 feet from the temple entrance and were even forbidden to stand on the stone slab of the temple's forecourt.

The Office of Special Events of The Met Museum  is  available to assist with every detail,  creating memorable events if you'd like to have a party  near  The Temple of Dendur in The Sackler Wing of the museum.
Posted by Секреты Большого Яблока