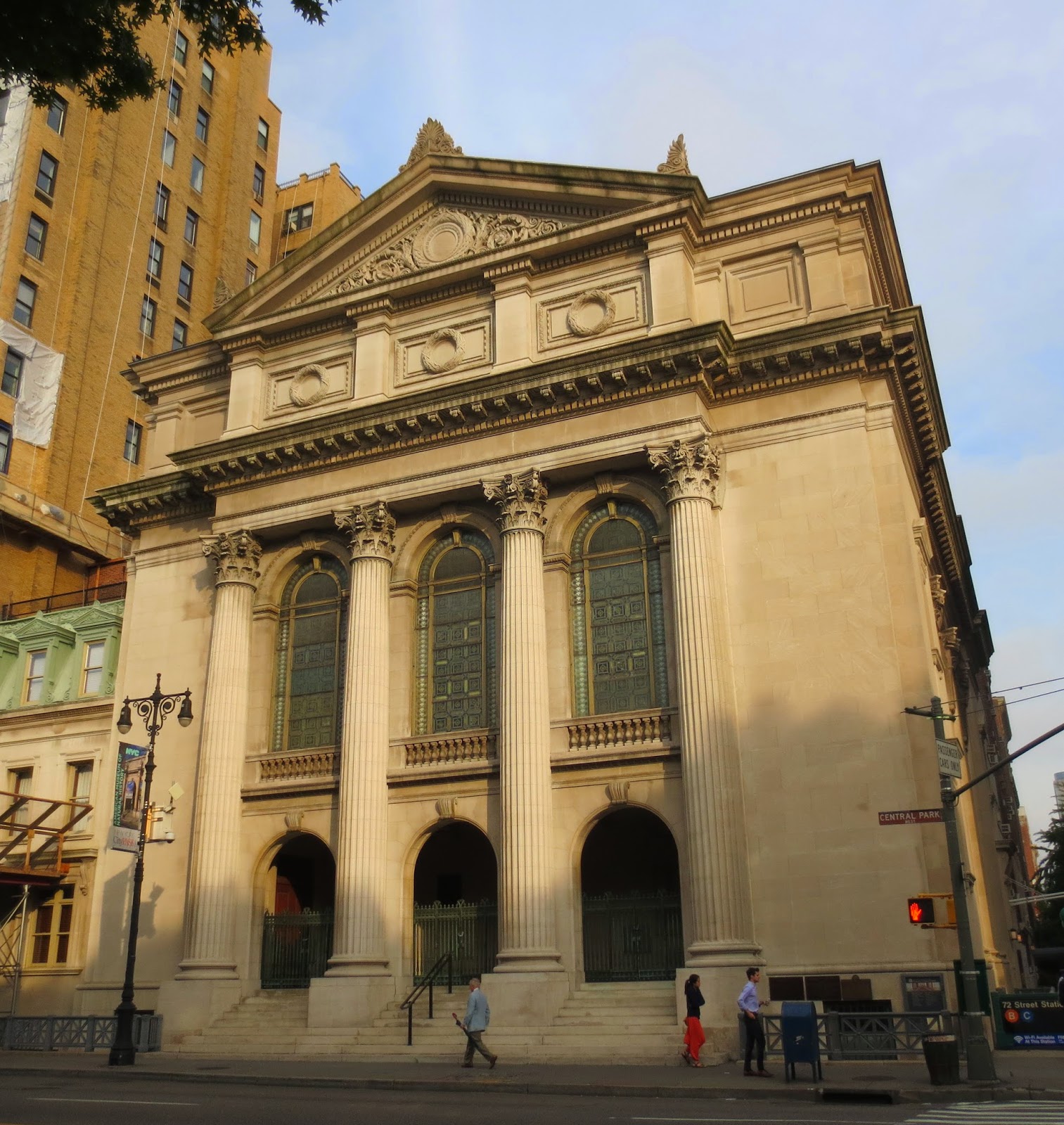 The beautiful  masonry building in neo-classical style, the present   home of Shearith Israel  congregation  sits in the middle of the Upper West Side historic district.  The New York metropolitan area now  is home to the largest Jewish population in the world outside Israel.  In 2012, more than  1,100,000  Jews lived in New York City (about 12% of the city's population).

The first Jewish community Shearith Israel was founded in North America in  1654, when New York  had the name  New Amsterdam.   The story behind this community  started  centuries   ago, in 1478, when  King Ferdinand II of Aragon and Queen Isabella I of Castile established the Spanish Inquisition. On April 30, 1492  Spanish King Ferdinand ordered all Jews to leave Spain by the end of July.   Jews gradually migrated throughout Europe , North Africa, Central and South America, including Brazil (under Dutch rule at this time).
When Columbus sailed from Spain on August 3, 1492, there were   several Jews among his 120 men.  Luis de Torres, a Jew from Murcia (south-eastern Spain), served as Columbus’s interpreter . When the ships arrived at Cuba, Luis de Torres decided to remain in Cuba. But  at that   time  he was the only Jew in North America. 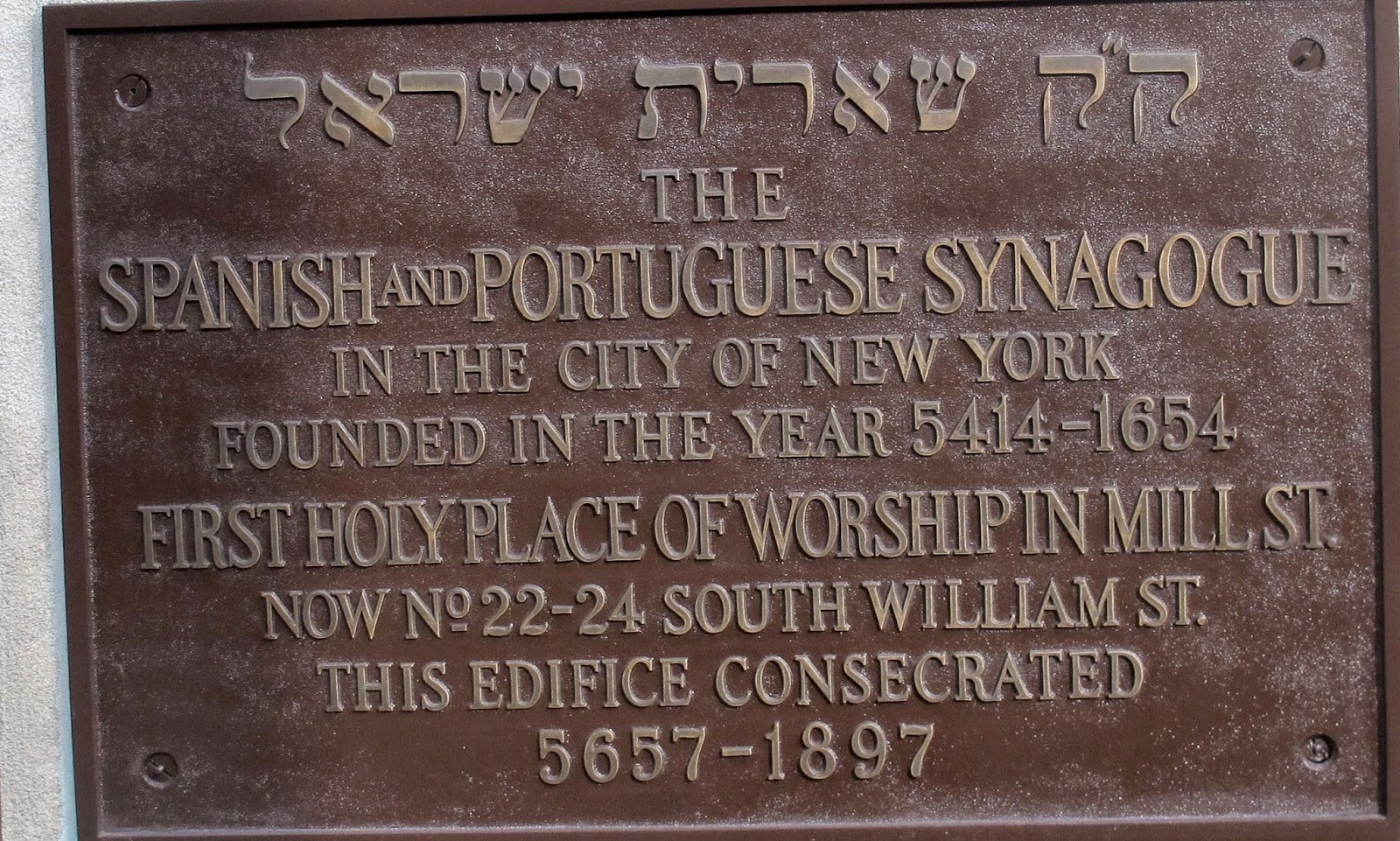 In February 1654, a month after Portuguese reconquest,  the Dutch schooner Valck,one of the two remaining  vessels  carrying Brazilian Jewish refugees sailed out of Recife, Brazil. En route it was captured by   pirates . The pirate’s captain forced the ship to land in Jamaica( Spanish colony at that time) , and expropriated  all of the passengers’ possessions.   Some Jews were even incarcerated by the local Inquisition.
The remaining 23 Jews  who were not jailed   were allowed to depart.
When the journey continued, the group stopped   on the western tip of Cuba and then was taken by the French ship St. Catherine to the Dutch colony of New Amsterdam, where they arrived in September, 1654.

This flagstaff, unveiled on May 20, 1955 at Battery Park in Downtown commemorates the 300th anniversary of the arrival of the first Jewish settlers in New Amsterdam and North America.

Stuyvesant, Dutch Director-General of the colony of New Netherland   objected to any settlers who were not members of the Dutch Reformed Church. He  attempted to evict the Jews, but Jewish stockholders in Amsterdam prevailed on the Dutch West India Company to order the narrow-minded governor to let them remain. 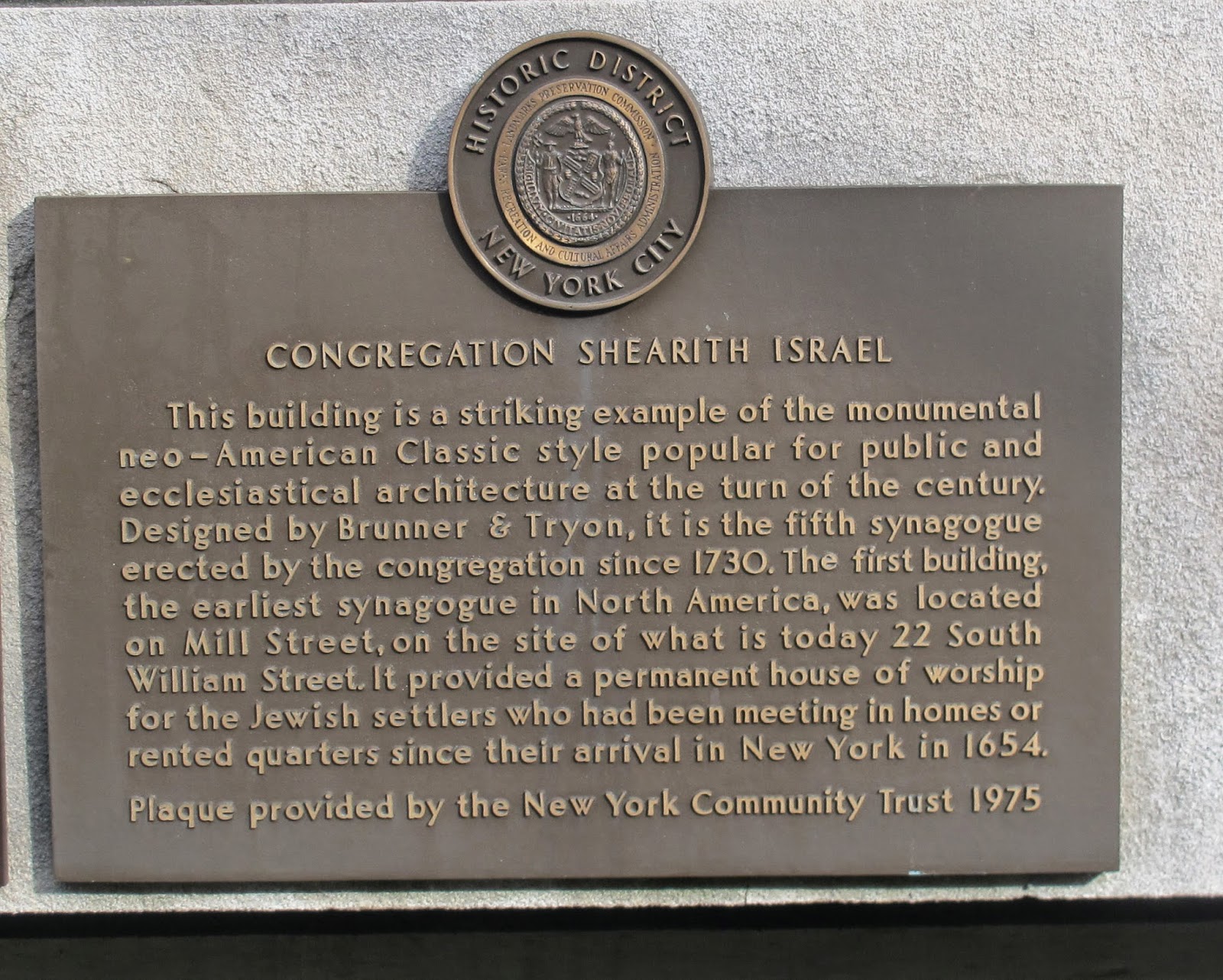 Stuyvesant attempted to establish a discriminatory regime ,but the Dutch West India company  instituted a rule allowing Jews to own real estate, trade freely, and be spared discriminatory taxes.

Seeing the ominous British power on both sides of the Dutch colony, the Jews gradually left in the 1650s. They went directly to Holland or to other Dutch colonies, including Curacao and St. Thomas .
The Synagogue in St. Thomas  is the  oldest synagogue in continuous use under the American flag. Famous Jews born here include French Impressionist painter Camille Pissarro and David Levy Yulee, Florida’s first senator. 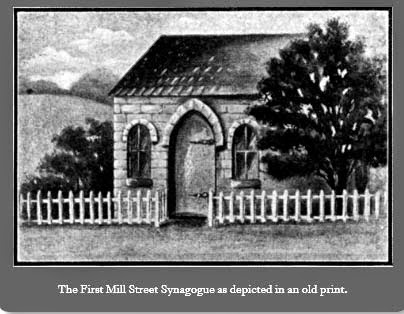 In the early years in New York  settled near Whitehall Street and later they  moved to Mill Street, which was later called “Jew Street.”  On Mill Street(South William street now) , they built their synagogue in 1728.

The New York Jewish community continued to grow with new immigrants attracted by the opportunities the port city offered in commerce.

On April 8, 1730, Congregation Shearith Israel, in New York, America’s first synagogue, consecrated its home, the first structure custom-built for a Jewish house of worship in the country. The small building, on Mill Street – what is today South William Street, in the Wall Street area of Lower Manhattan – was dedicated on the seventh day of Passover.

First Cemetery  of this congregation, dates back to   1683, is  in what is today Chinatown.  The Second Cemetery is hidden behind  the blue wall and  wrought iron fence on West 11th Street.  It caught my attention during a recent walk  in Chelsea. Burials began here in 1805, in what was a much larger, square plot. In 1830 was West 11th Street cut through,   reducing the cemetery to its present tiny triangle. The disturbed plots were moved further uptown to the Third Cemetery  on West 21st Street, and later when in   1852 city law forbade burial within Manhattan, subsequent interments have been made in Queens.

The present synagogue building, on 70th Street and Central Park West, is the fifth which The Congregation has occupied.   At the entrance to the synagogue, there are two millstones that were from Mill Street, the location of the town miller during the early colonial period.  They were taken from the site of The first Mill Street synagogue as a reminder of The historic roots in the city.
There is a replica of The Mill Street synagogue—the Little Synagogue inside the building.  The reader's desk and the four candlesticks surrounding it are also from the Mill Street synagogue.