The Statue of Liberty and its replicas. Part 2

The Statue of Liberty was created in 1886 by the French sculptor Bartholdi It was  presented as a gift from France to the United States. It  is now one of the most popular images in the world.  You can find more about the statue in one of my posts.
Hundreds of smaller replicas of the Statue of Liberty have been created worldwide. There are two statues in Paris, France. One, in the Jardin du Luxembourg, is a bronze model used by Bartholdi as part of the preparatory work for the New York statue. The artist offered it to the Luxembourg museum in 1900. The date written on this statue’s tablet (where the New York statue has “JULY IV MDCCLXXVI”)  is “15 de novembre 1889″ (November 15, 1889), the date at which the New York  statue  was inaugurated.
This second Statue of Liberty in Paris is   on   a man-made island in the river Seine. Its tablet bears two dates: “IV JUILLET 1776″ (July 4, 1776: the United States Declaration of Independence) like the New York statue, and “XIV JUILLET 1789″ (July 14, 1789: the storming of the Bastille). 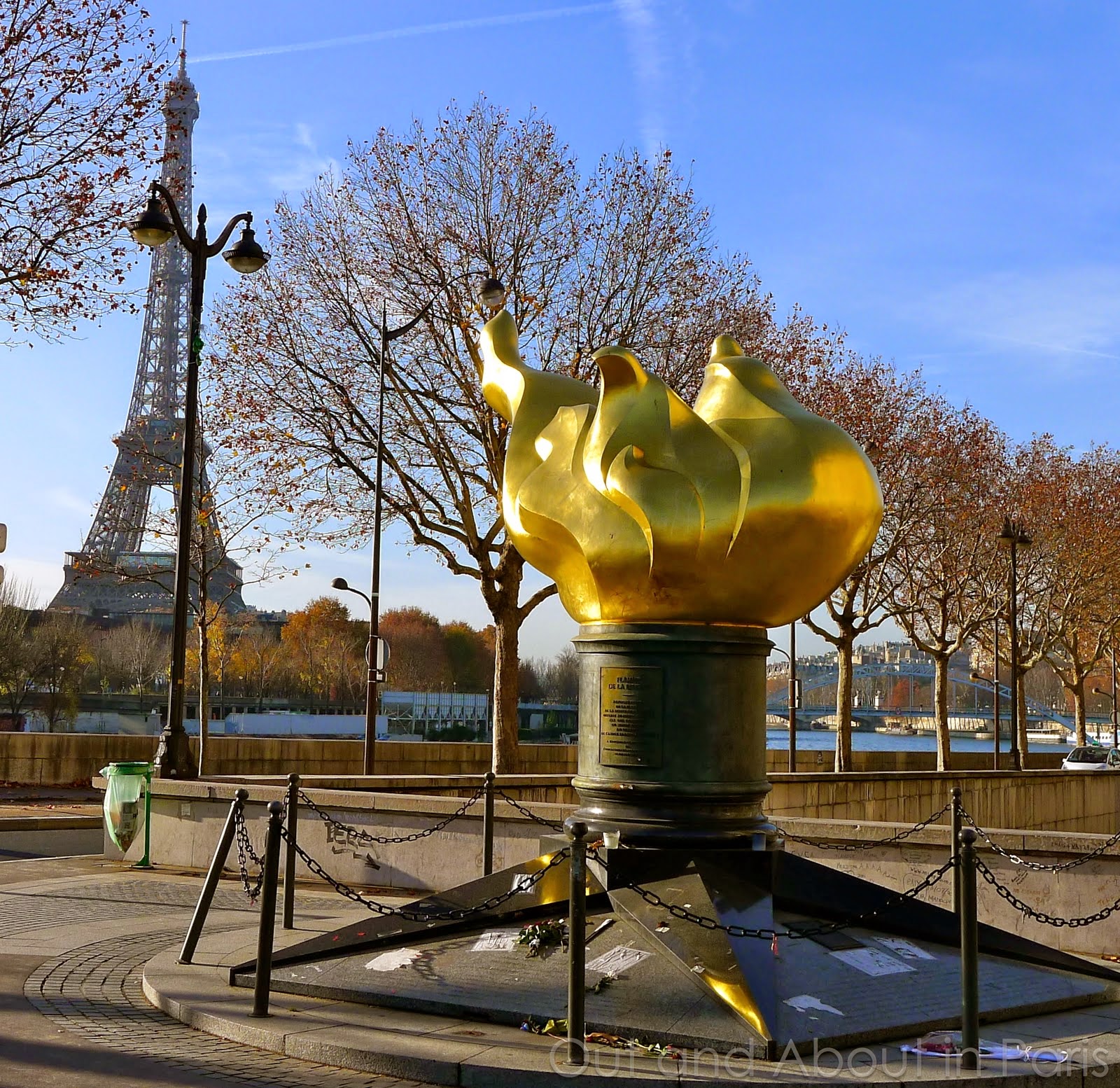 The full size  gold-leaf-covered replica of the new flame at the upper end of the torch carried in the hand of the Statue of Liberty is located near   the intersection of l'Avenue de New-York (New York Avenue) and the Place de l'Alma near one of the numerous bridges across Sienna in Paris.  It was offered to the city of Paris in 1989 by the International Herald Tribune on behalf of donors who had contributed approximately $400,000 for its fabrication. The flame became an unofficial memorial for Diana, Princess of Wales after her 1997 death in the tunnel beneath the Pont de l'Alma. 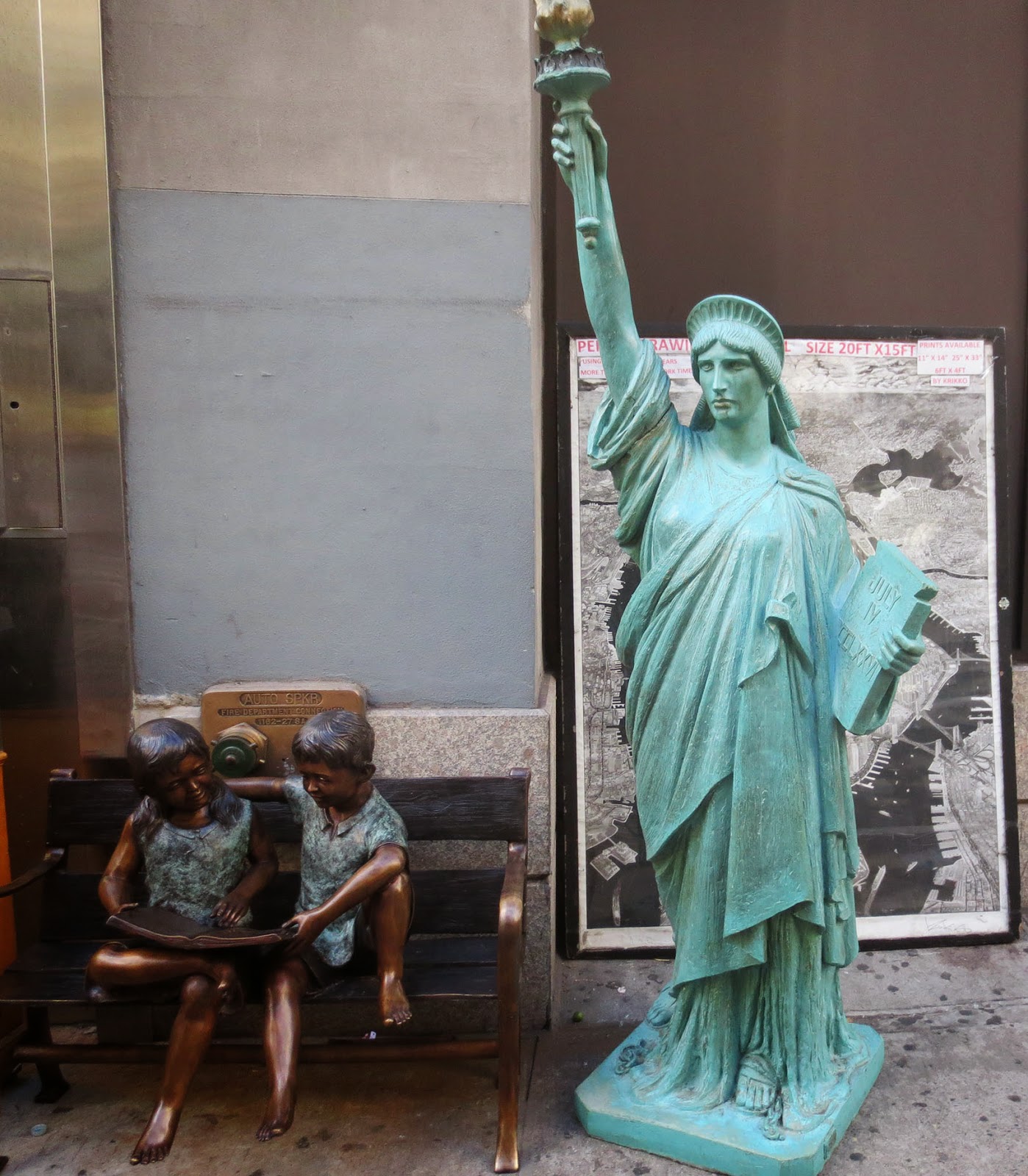 There are replicas of the statue in Germany, Norway, Spain, United Kingdom ,Argentina ,Brazil, China, Israel, Japan.
You can find a lot  of small replicas of the statue standing near the souvenir shops in New York.  Walking along the Broadway near the Times Square I saw three   Lady Liberties characters less than a block apart.

The oldest New York replica, 55 feet tall, dates back  to the very beginning of the 20th century. A French   architect William H. Flatteau built the building,  Liberty Warehouse, at 43 West 64th in 1891. The architect  wanted a replica of the statue to adorn the new building. The statue was cast in   Ohio in about 1900 and  shipped into NYC on a flatbed car after being sliced in half.

When erected the statue had a spiral staircase that allowed visitors to climb up to the top to get a  view.
In 2002  Liberty Warehouse was converted into luxury condos  and four floors were added to the 8-story building. The statue was relocated to Brooklyn and was placed on the parking lot at the back of Brooklyn Museum of Art. I   found it while walking in the Brooklyn Botanic Garden garden.
Posted by Секреты Большого Яблока

Email ThisBlogThis!Share to TwitterShare to FacebookShare to Pinterest
Labels: Statue