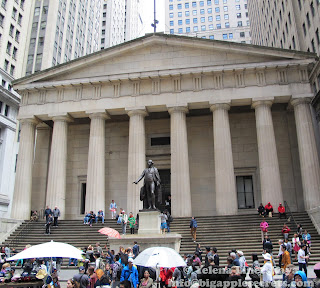 Federal Hall is one of the most distinguished places in American history. It  has been the site of government activity for more than 300 years. Here on Wall Street, George Washington took the oath of office as our first President, and this site was home to the first Congress, Supreme Court, and Executive Branch offices.


The first building on this site  was built in 1700 as New York's City Hall.
In October 1765 the Stamp Act Congress met in this building.  Congress  was the first colonial action against a British measure and was formed to protest the Stamp Act issued by British Parliament on March 1765.
The Stamp Act 1765   was an act of the Parliament of Great Britain that imposed a direct tax on the colonies of British America. It required that many printed materials in the colonies, such as    legal documents, magazines, playing cards, newspapers, should be printed     on stamped paper produced in London, carrying an embossed revenue stamp. The stamp tax had to be paid in valid British currency, not in colonial paper money.

British government invented   the doctrine of "virtual representation"  in attempt to legitimize the  policies of the Stamp Act.  Many Colonists saw it as a direct violation of their rights. Virtual representation was wholly rejected in the colonies, who said the "virtual" was a cover for political corruption.
There were  27  representatives of nine of the thirteen colonies (that eventually formed the United States of America ) attending   congress.  On October 19, 1765 the Stamp Act Congress adopted a Declaration of Rights and Grievances, which stated among other things that   only the colonial assemblies had a right to tax the colonies.
After the American Revolution, the City Hall served as the meeting place for the Congress of the United States under the Articles of Confederation, from 1785 until 1789. After the new federal government was launched with the 1788 ratification of the U.S. Constitution  in 1789  New York City  became  the nation's first  capital   and the building  was renamed Federal Hall.
Hoping to convince the new Congress to make New York the capital local businessmen contributed funding for a major expansion of the city hall. In 1788, the building was remodeled and enlarged under the direction of Pierre Charles L'Enfant, who was later selected by President George Washington to design the capital city on the Potomac River. 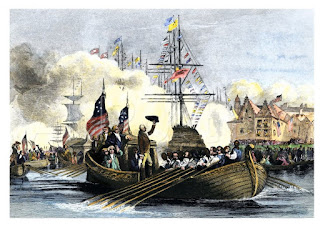 On  April 14, 1789,  at Mount Vernon   Washington received official notification that he had been unanimously selected by the Electoral College to be the nation's first president. In ten days   Washington  arrived in smaller barge to New York,  where   he  was greeted by New York Governor   and citizens.
Rudolph Von Dorsten was the Secretary of the Dutch Legation in New York City and describes Washington's entrance into the city: "President George Washington made his entry into New York on Thursday, April 23d. On the previous day a barge left this city. The barge was built expressly by the citizens of New York, and was rowed by thirteen pilots, all dressed in white. A committee of three Senators and five Representatives on behalf of Congress, and three of the first officers on behalf of New York, went to Elizabethtown in New Jersey, to welcome the President, and to await his arrival there. His Excellency was also accompanied by some well-equipped sloops and by a multitude of small craft with citizens of New Jersey and New York on board" 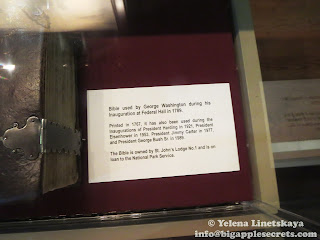 On April 30, 1789, the inaugural ceremony took place on the balcony of Federal Hall. Although the Constitution does not require it, most presidents have sworn the oath of office with their right or left hands placed upon a Bible. George  Washington was  Mason. The Bible used for the inaugural oath, printed in 1767, was the Altar Bible of St. John's Masonic Lodge, No. 1. Presidents George H.W. Bush, Carter, Eisenhower, and Harding also used the same Bible when they were inaugurated.
St. John's Lodge No.1 is the oldest operating Masonic Lodge under the jurisdiction of the Grand Lodge of New York F&AM.   The Lodge is active and  have meetings every month  on third Thursday  between September and May on the 6th floor of Masonic Hall in Manhattan.
In 1790  the United States capital was moved to Philadelphia and the building  once again housed the government of New York City until 1812.  Later the building was   abandoned , razed    and the polished marble mantles, crimson draperies and other remnants sold for $425. 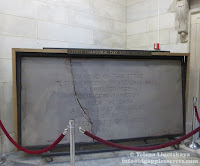 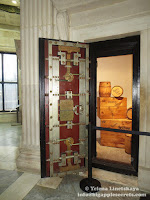 The present building is named in honor of that earlier structure.  It was constructed in 1842 as a first Customs House.  It took more than a decade to complete the building.  Twenty years later  in 1862, Customs moved to 55 Wall Street and the building served as one of six United States Sub-Treasury locations.  Federal Hall's subbasement was reinforced with steel.  At one point  there were 1,178 tons of gold and silver stored here. Millions of dollars of gold and silver were kept in the basement vaults until the Federal Reserve Bank replaced the Sub-Treasury system in 1920. 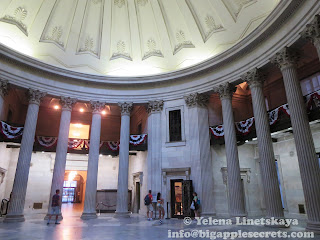 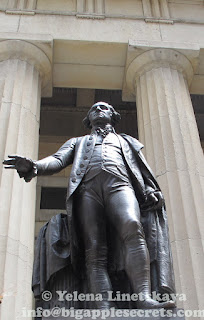 There is a huge statue of General Washington in front of the redesigned Federal Hall.  The statue was unveiled in 1883 to commemorate Washington's 1789 inauguration in the building. It was done by American sculptor John Quincy Adams Ward. There are several  other statues by Ward in New York-     four of them are in the Central Park  and one ( high relief) - across the street from the Washington Statue.  The 110 ft. wide pediment of New York Stock Exchange contains eleven figures,   including figures symbolizing Science, Industry, Agriculture, Mining, and a figure that represents "Realizing Intelligence."

The building today houses a very small museum.    Park rangers inside  help to answer questions.   Federal Hall a nice place to visit for 30  minutes if you have interest in early American history. The hall is open   Monday-Saturday, 9am-5pm. It is free and there are restrooms inside.
Posted by Секреты Большого Яблока