Jim Dine is a contemporary American visual artist who was born in 1935.  Jim Dine has had numerous gallery and museum exhibitions, including at the Philadelphia Museum of Art and at the  Museum of Modern Art.


In the early 1960s Dine produced pop art with items from everyday life. These provided commercial as well as critical success, but left Dine unsatisfied. Since the late 1980s, the artist  has sketched and studied Greek and Roman sculpture, and the form of the Venus de Milo has become one of his favorite themes, depicted in a variety of media.
These are three of Jim Dine's sculptures collectively entitled "Looking Toward The Avenue" installed in 1989 in the small plaza on the east side of Sixth Avenue at west 53rd  and 54th Streets in Manhattan. The verdigris bronze statues  emerge from a water pool.    These sculptures  are based on Venus de Milo, a masterpiece from the 2nd century BC.  Another Venus, the largest of all of Dine's sculptures, is installed above the entrance to Cleveland's new, 22-story Carl B. Stokes Court House.
These statues were inspired by  the Venus de Milo, a masterpiece of the 2nd century BC.  The Venus de Milo was sculpted   by the artist Alexandros of Antioch as a depiction of the Greek goddess of love, Aphrodite and  is the most famous sculpture and, after the Mona Lisa, the most famous work of art in the world. It is currently on permanent display at the Louvre Museum in Paris.
The statue was discovered in 1820 on Milos island in Greece , when farmers dug up stones for their houses. Originally she was painted and adorned with accents, such as ear rings and a bracelet, intended to give her a more life like appearance. In her left hand she held an apple, the symbol of Milos, and her right arm was across her torso. The golden apple is also the symbol of her being “the fairest of the goddesses.” 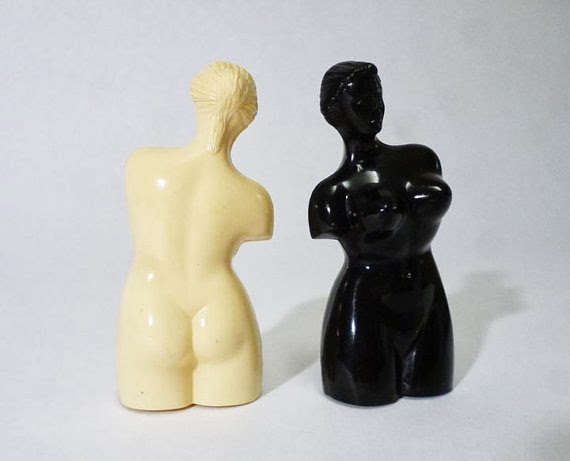 The statue was found in two large pieces (the upper torso and the lower draped legs) along with several fragments. A farmer   tried to hide the statue in his stone house, but Turkish officials later seized it. The French naval officer  realized its importance and made arrangements to purchase it from Turkey. The statue was taken to France by boat and after repair work, was offered to Louis the XVIII. He presented it to the Louvre museum where it can still be seen.
Venus de Milo  image is reproduced in advertisements, on covers of CDs, even as saltshakers. But she has also inspired artists such as Cézanne, Dali and  Magritte.
Spanish artist  Salvador Dali   used  a statue as a model  for  ‘Venus de Milo with drawers’ .As a child, Dali's first sculpture was a clay copy of the Venus de Milo.  For 1936 Surrealist object, Dali cuts six drawers into Venus, transforming the Greek goddess into a piece of living furniture, a visual pun on the phrase "chest" of drawers, also known as a bureau. The drawers are a metaphor for the way Freudian psychoanalysis opens the hidden areas of the unconscious.   Dalí said: “The only difference between the immortal Greece and contemporary times is Sigmund Freud, who discovered that the human body, purely platonic at the Greece epoch, nowadays is full of secret drawers that only the psychoanalysis is capable to open”.