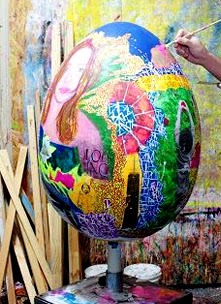 New York City is  ready for an old-fashioned Easter egg hunt for adults !  A number of prominent  artists and designers have created eggs for the Fabergé Big Egg Hunt, arriving in New York on April 1.  The original Faberge eggs were created by Peter Carl Fabergé   from 1885 to 1917  for the Russian Tsars Alexander III and Nicholas II as Easter gifts for their wives and mothers.
The cost of a Faberge egg varies based on how ornate it is and how old it is. The most recent one was  sold at a cost of 9.58 million dollars US.  You can read  the beginning of the story in my older post.


Faberge made only 50 imperial Easter eggs and 7 of them were lost.  One of the lost eggs  was found recently in American  flea market. It was the egg that was made   in St Petersburg in 1886-1887 and  was given by Alexander III to the Empress Maria Feodorovna in 1887.  It was last seen in public in March 1902, as part of an exhibition of Imperial treasures in St Petersburg.  Seized by the Bolsheviks, it was last recorded in Moscow in 1922 when the Soviets decided to sell it as part of their ‘Treasures into Tractors’ policy.
The egg was bought by an American Midwest scrap-metal dealer on a flea market a decade ago. He paid $14,000  and intended to sell it on to a buyer who would melt it down, turning a quick profit of a few hundred pounds. But prospective buyers thought he had over-estimated the price and turned him down. So the egg had been sitting on his kitchen countertop till 2012 when the dealer searched Internet for the words “Vacheron Constantin”,  etched on the timepiece inside.


He found an   article written for The Telegraph in August 2011 by  Kieran McCarthy, Fabergé expert at Wartski,  and contacted him.  Mr McCarthy said: “He saw the article and recognized his egg in the picture. He flew straight over to London – the first time he had ever been to Europe – and came to see us. He hadn’t slept for days. “He brought pictures of the egg and I knew instantaneously that was it. I was flabbergasted – it was like being Indiana Jones and finding the Lost Ark. This should give hope to every antiques enthusiast out there. There are great treasures still to be found.”
Mr McCarthy flew to the US to verify the discovery. Wartski have acquired the egg for a private collector. The buyer has allowed the egg to go on public display for four days  this year , April 14-17 in a specially designed exhibition in London. 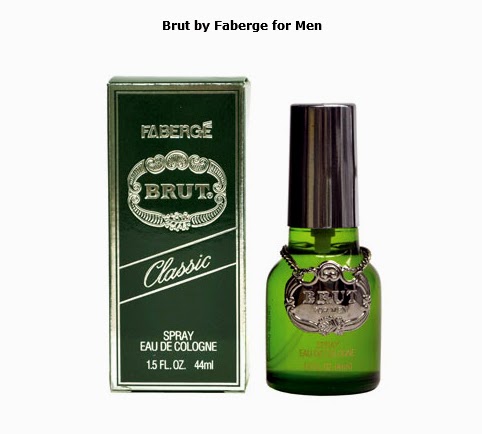 Faberge name was sold and resold several times. In 1937 friend of American oil billionaire Armand Hammer, who was personal friend of Lenin  and managed to get most of the Fabergé eggs, started the company to manufacture perfumes and toiletries and   registered it, at Hammer’s suggestion, as Fabergé Inc.
In 1945 the Fabergé family discovered that their name was being used to sell perfumes without their consent. An agreement was reached out of court in 1951. In 1964, Rubin sold Fabergé for $26 million.


On 3 January 2007, Pallinghurst Resources LLP, an investment advisory firm based in London, announced it had acquired  entire global portfolio of trademarks, licenses and associated rights relating to the Fabergé brand name for an undisclosed sum.  The trademarks, licenses and associated rights were transferred to a newly constituted company, Fabergé Limited, which was registered in the Cayman Islands. New company announced that they  plan to restore  Fabergé to its rightful  position and announced  reunification of the Fabergé brand with the Fabergé family with Tatiana Fabergé and Sarah Fabergé, both great-granddaughters of Peter Carl Faberge.

On 6 July 2011 the company launched two collections of egg pendants, including a dozen high jewelry eggs. These were the first to have been made by Fabergé since 1917.
Faberge opened  their first U.S. flagship on 684  Madison Avenue ( at East 62)  in the spring of 2012. The boutique’s signature egg is peach-pink,   with a diamond-encrusted serpent and pearls, and purchases can easily hit the thousands.

In the same year the company sponsored  Faberge Big Egg Hunt in London.  Around 200 artists, celebrities and designers created and painted meter high fiberglass eggs which were scattered across selected locations around London. Londoners had forty days from February 21, 2012 to locate the various giant eggs around the city. From April 3 to 9 all the eggs were displayed together, in Covent Garden, for the first and last time.  Guinness World Records announced that a new title had been achieved for the most participants in an Easter egg hunt-  more than 12,000 people took part !  ﻿﻿
﻿﻿﻿﻿This year Faberge sponsored New York big Easter egg hunt.  Nearly 270 Faberge eggs — standing two feet high— are allready spread around the city for the public to discover.
Each one is 2-and-a-half-feet tall  and is unique and designed by a different artist.    The game is exactly as the game for kids except that  in order to participate in the game  you have  to use a smart phone app specially designed for the event.  The app allows participants to check in whenever they've discovered one of the egg creations, and it will notify them whenever they're within a 20-foot radius of one of the fancy eggs. 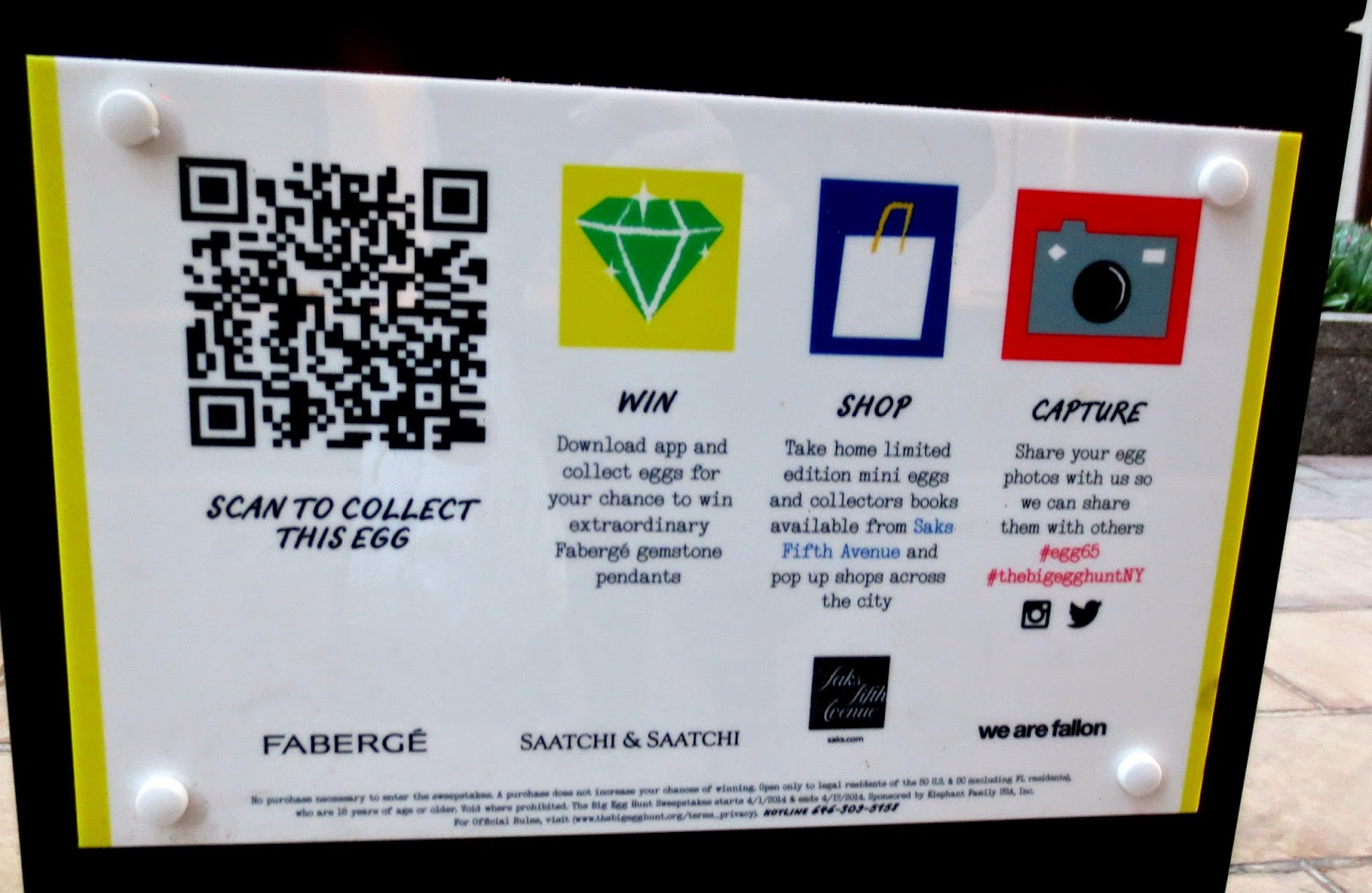 The smartphone app used by the public is free, and every time 10 people check in at one egg its location will be disclosed on an interactive map.

On the last week, April 18 to April 25, all the sculptures will be brought to Rockefeller Center and put on display for everyone to enjoy, Faberge said. All proceeds will benefit two charities: “The Elephant Family” ( to protect  Asian elephants and their habitat ) and Agnes Gund’s “Studio in a School” (community of  artists  teaching visual arts to   New York City children in under-served public schools)
Participants who enter the hunt will have the opportunity to win one of three Fabergé prizes, with a combined retail price exceeding USD 125,000. 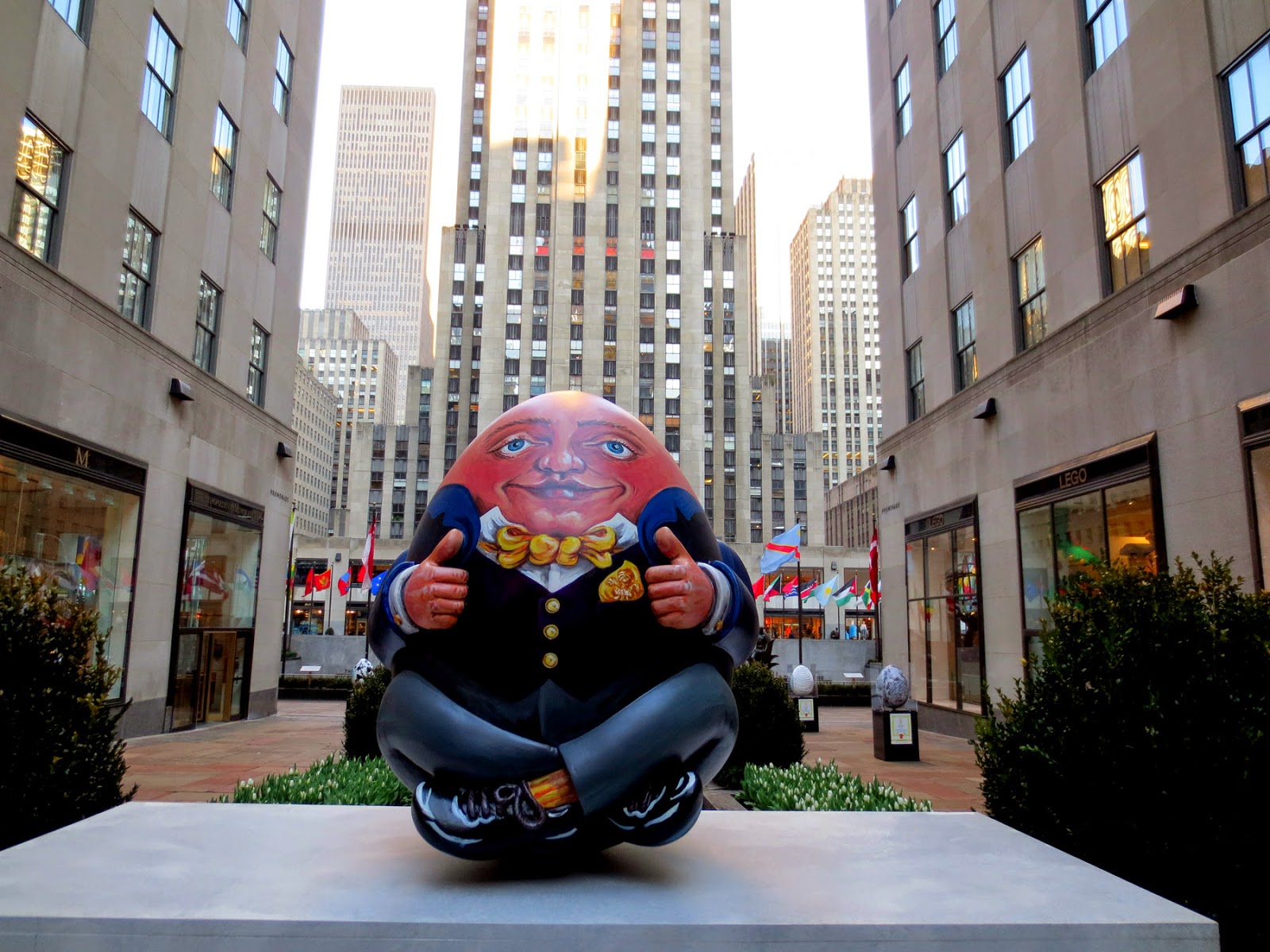 During the final week of April, all the egg sculptures will be auctioned off in a sale by Sotheby's. Replicas of a selection of our favorite eggs will be available to purchase.  These limited edition, hand-painted ostrich eggs, as well as a range of merchandising created exclusively for The Fabergé Big Egg Hunt in New York, will be available online and in retailers.


Key Dates of Egg Hunt:
•The Fabergé Big Egg Hunt - April 1st – 26th 2014
•All eggs nest together in one location - April 18th – 26th, 2014
•Grand Auction – April 22nd, 2014
•The Fabergé Big Egg Hunt closes – April 26th, 2014
Saks Fifth Avenue New York,Official Retail Partner of the Fabergé Big Egg Hunt, is a home to nine iconic artist-designed eggs. I found one of them yesterday without an app! Sack had a funny Yeti window show this year on Chtistmass.  Saks olso carry hand-painted limited-edition replicas of the eggs featured in the hunt. Constructed from ostrich eggs, these collectible novelties will be sold in 20 different varieties in the New York Store and on saks.com from Tuesday, April 1 through Wednesday, April 30.

I also was able to spot another egg yesterday in the lobby of the the atrium  of Park Avenue Blackrock office building, on the place where there was a winter installattion: bears   sing , skate, cook and enjoying the holiday with moving parts popping up and background holiday music.

﻿
Here you can download the free app that help navigate the scavenger hunt to discover all the hidden egg sculptures. "Using this app, you can “collect” eggs and, in the process, enter a sweepstakes for a chance to win a Fabergé jewel encrusted egg pendant"